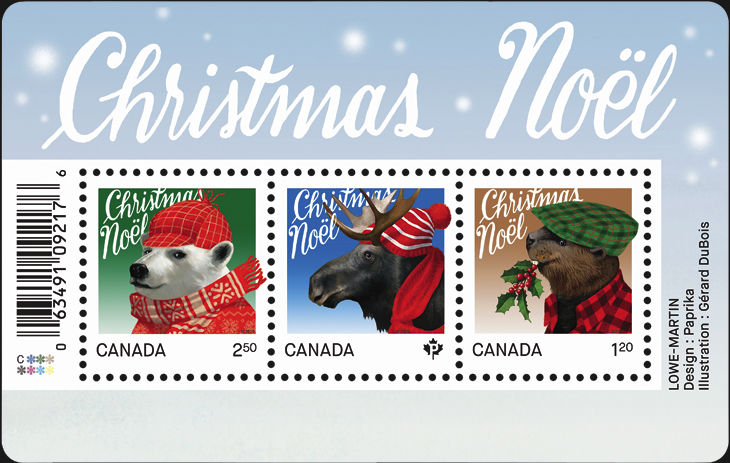 Three-stamp Christmas Animals souvenir sheets are perforated and have moisture-activated gum. The souvenir sheets also will be affixed to Canada Post’s first-day cover for the issue, which will be canceled in Christmas Island, Nova Scotia, a tiny village on Cape Breton Island. 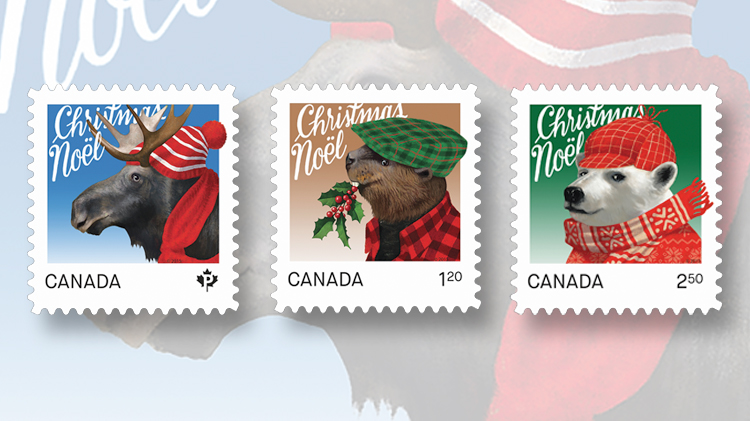 Paying Canada’s domestic letter rate, the letter rate to the United States and the letter rate to other international destinations, respectively, self-adhesive Christmas Animals booklet stamps depicting a moose, beaver and polar bear, each nattily attired for the season, will be Canada’s Yuletide ambassadors on seasonal mail around the world this year. 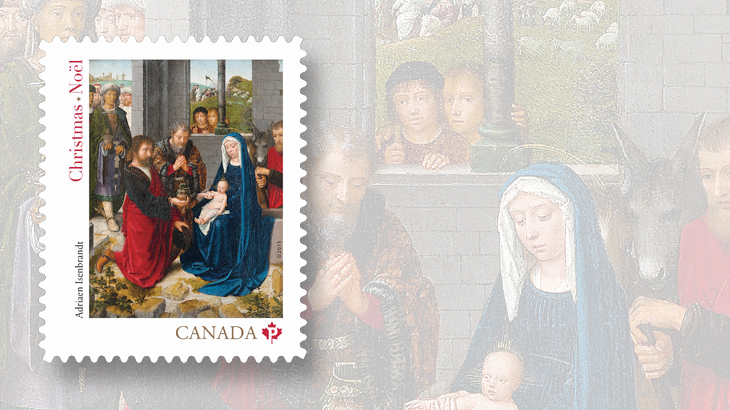 Canada’s nondenominated permanent domestic-rate (85¢) Madonna and Child stamp reproduces The Adoration of the Magi, painted in the 1520s by Adriaen Isenbrandt, a master in the painters’ guild in Bruges. It was part of a gift of more than $75 million in artwork to the Montreal Museum of Fine Art from Michal and Renata Hornstein, who survived the Holocaust and wished to thank Canada for the chance to start again after World War II. 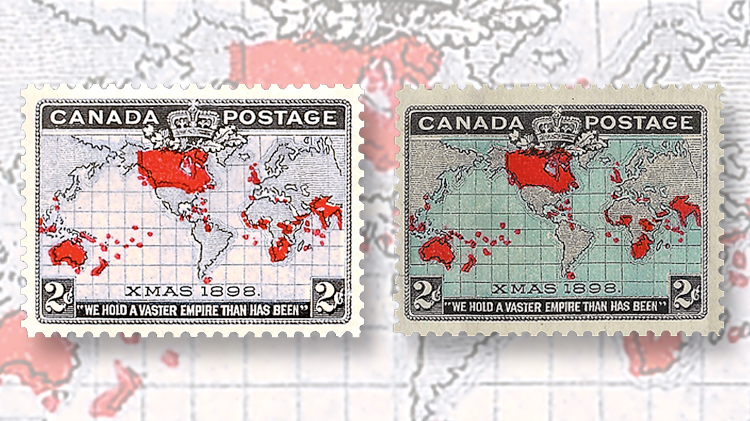 Two trios — one ages-old from the New Testament, the other newcomers born in the fertile minds of a Montreal artist and design studio — make merry and memorable Canada Post’s 2015 Christmas stamps, to be released Nov. 2.

During the years since it issued the world’s first Christmas stamps in 1898 (Scott 85-86), Canada’s holiday stamps have shown what Canada Post calls “a menagerie of familiar and beloved creatures.” The article in Canada Post’s Details magazine specifically mentions animals from the Nativity scene, Santa’s reindeer, and a dove of peace.

This year’s stamps add a beaver, moose and polar bear to the philatelic menagerie. They are designed by the studio Paprika and illustrated by painter and artist Gerard DuBois.

Canada Post describes the trio of animals as “quintessentially Canadian beasts,” and says that in the close-up portraits on the stamp designs you can see the detail of their fur and distinctly Canadian winter fashions, including flannel shirts, knitted toques, a bear-size snowflake-theme sweater, and a scarf and red checked deerstalker hat.

These sartorial details somehow make these fantastic, imaginary portraits look more believable and real, “with a retro flare,” according to Canada Post.

“The flow of certain elements, such as the edge of a scarf, beyond the boundaries of the stamp frame, adds a three-dimensional touch as well. The animals’ expressions, their choice of winter attire and their ‘Canadian-ness’ just make you break into a grin. That’s why these stamps are perfect for sending cards to friends and family during the Christmas season,” Canada Post said.

Die-cut, self-adhesive stamps are available in booklets of 12 (the “P” rate Moose) or six (the $1.20 Beaver and $2.50 Polar Bear), and a $4.55 souvenir sheet includes all three stamps with perforations and moisture-activated gum.

The fourth 2015 Christmas stamp depicts a Nativity-theme painting, courtesy of the Montreal Museum of Fine Arts (MMFA), The Adoration of the Magi by 16th-century artist Adriaen Isenbrandt.

His exact birth date and year are not known, but Isenbrandt was active in Bruges from 1510, when he became a master in the painters’ guild.

The Adoration of the Magi, an oil-on-panel work, is believed to have been painted in the 1520s. It depicts a traditional scene from the Nativity: the moment when Mary, Joseph and the infant Jesus welcome the arrival of the Magi.

In the painting, the Wise Men stand in the background on the left, while other onlookers — including animals typically associated with the scene — appear throughout.

This work was part of a major donation made to the museum by Michal and Renata Hornstein. This remarkable couple began life as Polish Jews who narrowly survived the Holocaust, barely escaped with help from sympathetic civilians through Nazi-occupied Czechoslovakia and Hungary, and met and married in Rome in 1946.

Encouraged by the Canadian ambassador to Italy whom they had befriended, the Hornsteins relocated in 1951 to Montreal, where Michal enjoyed success developing residential and commercial properties through his company, Federal Construction Ltd.

The couple resolved to share the fruits of their success with the nation that had welcomed them with open arms, and became outstanding philanthropists, with generous donations to the Cedars Cancer Institute, Montreal General Hospital, Concordia University, and the Montreal Museum of Fine Arts.

According to a biographical sketch of the couple from 2014 when they received honorary doctorates from Concordia University, “…when the Hornsteins lived in Rome they developed an appreciation for art, which, as the years progressed, transformed into a world-class collection of works by Dutch, Flemish and Italian masters including Rubens, van Goyen, di Paolo and more.

“Though they had already given to the MMFA — where Michal has served on the board of trustees since 1970 — in 2012 they donated approximately 70 Old Master paintings, valued at about $75 million, to the museum.”

Canada Post has announced that another piece from the Hornstein collection will be featured on a Christmas stamp in 2016.

One possibility, also donated by the Hornsteins, is Virgin and Child, painted around 1460 by an anonymous minor Italian luminary of the mid-15th century, identified only by another of his 30 or so attributed works as “Master of the Castello Nativity.”

Louise Methe designed the stamp, using a photograph of the painting by Denis Farley.

The 9,000 official first-day covers feature a color winter background for the souvenir sheet and will be canceled at Christmas Island, Nova Scotia. The sheet sells for $5.55, and its order number is 403831144.

The official FDCs, issued in a quantity of 9,000 and priced at $1.85, feature golden stars and are order number 413824131. The first-day cancel from Montreal pictures the three gifts of the Magi.

Canada stamps and philatelic products are available from the Canada Post Shop. Stamps and FDCs will be available by mail order from the National Philatelic Centre, Canada Post Corp., 75 St. Ninian St., Antigonish, NS B2G 2R8, Canada; or by telephone from the United States and Canada at 800-565-4362, and from other countries at 902-863-6550.