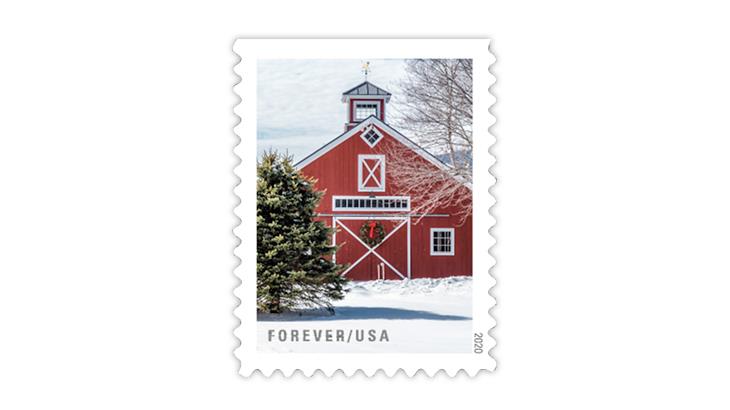 A red barn in snow is seen on one of the 10 United States Winter Scenes forever stamps that will be issued Oct. 16. 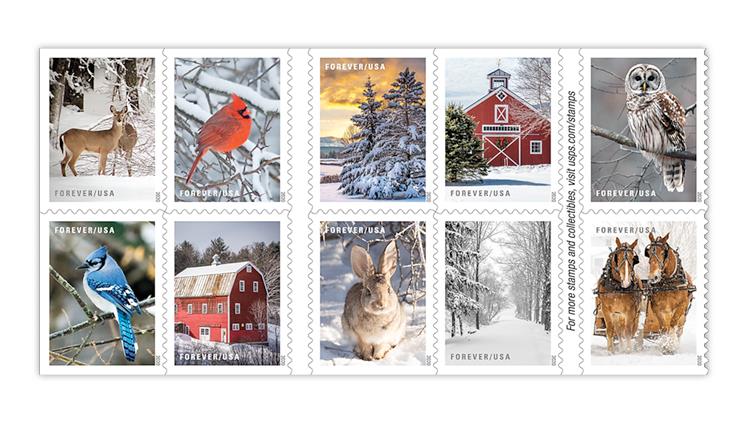 The new set of 10 Winter Scenes forever stamps shows animals in snow and other wintry views. The set will be issued Oct. 16 in double-sided panes of 20. 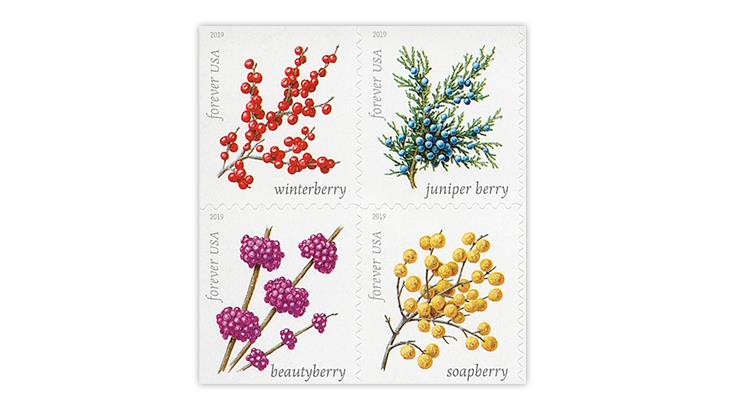 The new stamps continue a theme of winter that has appeared on one non-holiday stamp set each year for the past several years. The Winter Berries forever stamps pictured here were issued in a double-sided pane in 2019. 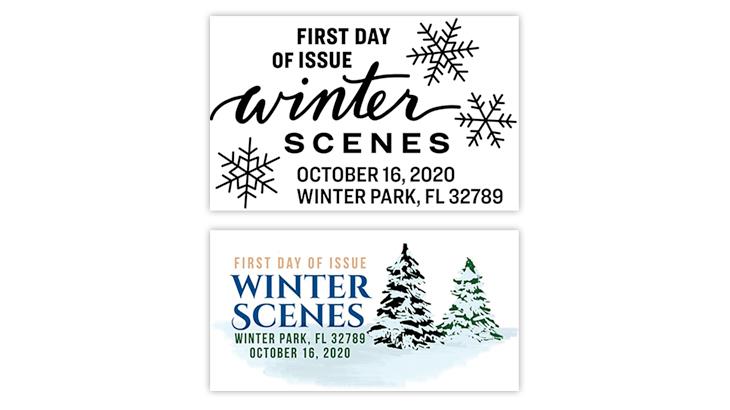 Two postmarks have been created for first-day covers of the Winter Scenes forever stamps. The official city of issue is Winter Park, Fla.
Previous
Next

The nondenominated (55¢) stamps will be offered in a double-sided pane of 20, a format that the Postal Service identifies as a booklet.

Although the Postal Service does not consider this set part of an ongoing series, over the past several years it has issued one set of forever stamps each year with a winter theme not specific to Christmas. Each of these sets has been offered in the double-sided pane format.

These stamps have all been issued independent of traditional and contemporary Christmas stamps but appear to be popular with mailers.

The Postal Service has arranged for a printing of 400 million Winter Scenes stamps from contract printer Ashton Potter. That is 100 million more than the print quantity of last year’s Winter Berries issue.

As this issue of Linn’s was being prepared for publication, the Postal Service had not announced plans for an online event welcoming the Winter Scenes forever stamp. All in-person first-day ceremonies have been suspended since March as a response to the ongoing COVID-19 pandemic.

However the Postal Service has hosted virtual events for several recent stamps on its Facebook and Twitter pages.

The 10 different stamp designs in the Winter Scenes set are created from stock photographs showing winter settings with birds and other animals, red farm buildings and snowy landscapes.

The photographers were not identified.

“The 10 different photographs featured in this booklet of 20 stamps showcase the special allure of winter, with iconic scenes from the northern United States,” according to the Postal Service.

Each stamp is in a vertical format with “FOREVER/USA” lettered in dark gray or dropout white along the top left or bottom left of the vignette.

In the preliminary artwork of the 10 stamps shown here, the stamps in the top row picture two deer in a wooded area, a male Northern cardinal among snowy branches, snow-covered evergreens with a golden sky background, a red barn with a holiday wreath, and a barred owl perched in a tree.

The stamps in the lower row show a perched blue jay, a red farm building with a snowy roof, a young cottontail rabbit, a snowy path through the woods, and a team of two horses.

The Postal Service prepared two pictorial first-day cancels for the Winter Scenes forever stamps. The black cancel, which is applied to most requests, features three simple snowflake patterns surrounding the name of the stamp issue, issue date and designated first-day city, which is Winter Park, Fla.

The color cancel features an image of two evergreens, similar to the scene on one of the Winter Scenes stamps, and includes the stamp set name and issuing location as well.

Up to 50 black postmarks can be requested on collector-supplied envelopes at no cost. Digital color postmark requests require a fee of 50¢ per postmark with a minimum order of 10. Two test envelopes must be included as well.

The Postal Service also sells first-day covers with either the black or color postmarks, in full sets of 10 each.