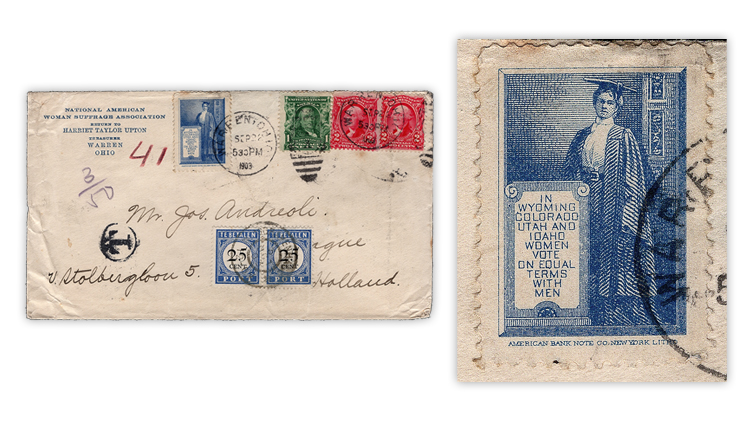 This cover sent in 1903 from Harriet Taylor Upton of the National American Woman Suffrage Association to Holland bears a label promoting the group’s message.

The text on the label makes no reference to New York. Rather, it says, “In Wyoming, Colorado, Utah and Idaho women vote on equal terms with men.”

I now have three covers with the label, and it is clear that the association was national in scope with its headquarters in Washington, D.C.

The cover shown here was sent in 1903 to Holland, properly prepaid with 5¢ postage (a 1¢ Franklin and two 2¢ Washington stamps) for international surface transport.

It might have been refused as the Post Office Department had rules about nonpostage stamps being affixed to the front of envelopes, but it reached Holland, where it was readdressed, forwarded and charged postage due.

Note that the cover gives us a more complete name of the organization: the National American Woman Suffrage Association.

The cover was sent by Harriet Taylor Upton (1853-1945), a political activist and author who devoted most of her efforts to the struggle for women’s right to vote.

Who is Marjorie Chandler?