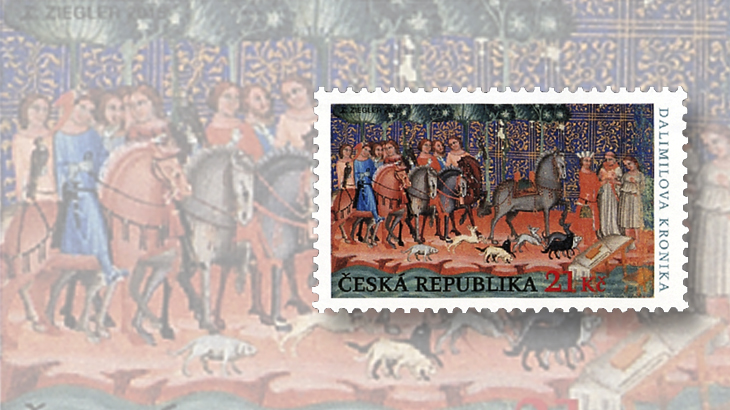 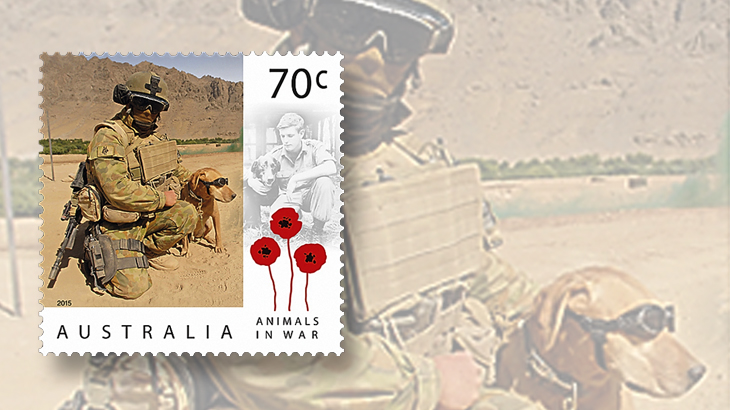 Dogs are among the animals of war commemorated by Australia on a set of stamps issued Oct. 27. The photograph reproduced on the left side of this design was taken in Afghanistan in 2008. 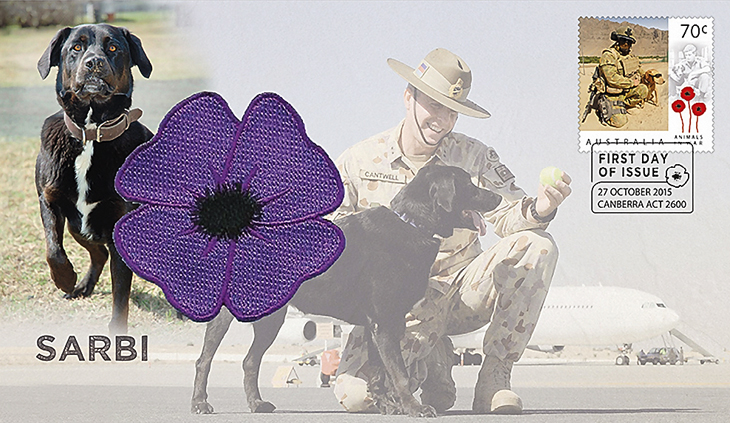 An Australia Post first-day cover for the Animals of War issue shows Australia’s most decorated war dog, Sarbi, in the cachet. The cloth purple poppy on the cover honors animals who have served in world conflicts. 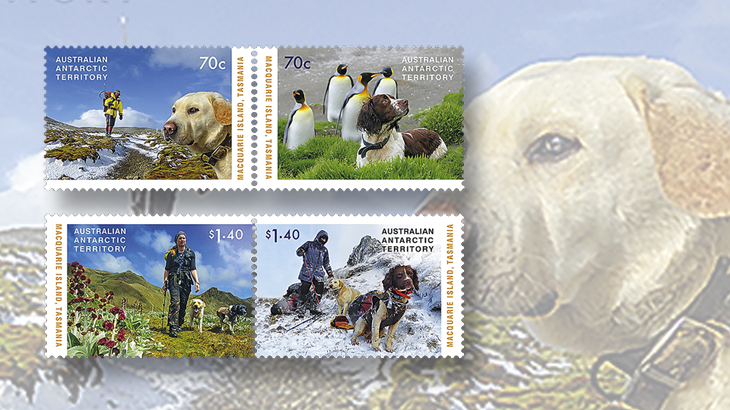 The dogs that saved Macquarie Island are honored on four stamps issued Sept. 9 by Australia Post. The stamps are inscribed Australian Antarctic Territory. 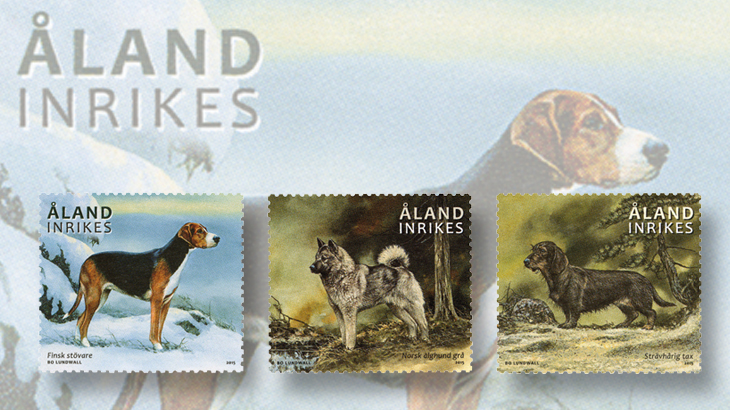 Dogs bred and trained for various roles, from hunting to bomb detection, are pictured on recent stamps.

Starting in the late 19th century, the Finnish hound was bred in Finland to hunt fox and hare.

According to the website of the Finnish Kennel Club, this hound is one of the most popular dog breeds in the country, and many hunters consider it to be the “world’s best game-pursuing breed at the moment.”

The Norwegian elkhound, the national dog of Norway,  is an ancient breed, dating back to at least 5,000 B.C.

The American Kennel Club describes this breed as “dignified, independent and generally friendly,” and “a solid, sturdy hunter of elk, bear and other wild animals.”

In the early 17th century, the dachshund was bred in Germany to hunt badgers. The first dachshunds were smooth-haired, followed by the long-haired variety and later by the wire-haired.

In announcing the stamps, Aland Post called the wire-haired dachshund a versatile hunting dog, used to chase and flush out small game and roe deer and also used in searching for wounded game.

In its Frimarken magazine for collectors, Aland Post identifies the canine models as Tova, a Finnish hound owned by Marcus Pavals; Molle, a Norwegian elkhound that belongs to Hakan Holmberg; and Kia, Hillevi Hagberg’s wire-haired dachshund.

Postnord printed the stamps by offset.

They are nondenominated with the inscription “Inrikes,” which translates to “domestic.”

Hunting dogs also are pictured on a stamp issued Oct. 14 by the Czech Republic. The 21-koruna stamp commemorates Dalimil’s Chronicle.

Sometimes called the Boleslav Chronicle, this early 14th-century work is the oldest chronicle written in the Czech language. In its 106 chapters, it covers Czech history up to 1314.

The stamp reproduces an illustration from the chronicle showing Oldrich (circa 975 to 1034) on a hunt, where he meets Bozena. A scene of a priest marrying the couple is pictured on the far right.

Zdenek Ziegler designed the stamp. The Post Printing House in Prague printed it by offset in sheets of 50.

Australia Post issued these stamps Sept. 9 in two se-tenant pairs, one with 70¢ stamps and the other with $1.40 stamps.

The stamps are valid throughout Australia and all its territories.

The Australian Antarctic Division of the Department of the Environment describes Macquarie, which is located halfway between Australia and the Antarctic continent: “A rare uplifted portion of the sea bed at the edge of two tectonic plates of the earth’s crust, the island was declared a World Heritage property in 1997 for its geological qualities. The island lies beside the southern extension of the great Alpine Fault of New Zealand and experiences frequent earth tremors. But it is also home to vast quantities of Southern Ocean birds and mammals, a factor that made it a prime target of commercial interests in the 19th and early 20th century.”

During those centuries, a number of animals were introduced to the island that posed a threat to the native fauna and flora.

Dogs were brought in as part of a project funded by the Australian and Tasmanian governments to eradicate rabbits and rodents. The dogs were removed in 2014, after the project was declared a success.

In reporting on the new stamps, Matthew Groom, Tasmania’s minister for environment, parks and heritage said, “It’s estimated the 15 detector dogs, including springer spaniels, Labradors, terriers and a terrier-cross, covered more than 90,000 kilometres [56,000 miles] in their efforts to locate any surviving individual pests.

“It is recognition of the incredible work ethic of the dogs, which were highly trained to ensure they would not be distracted by native animals and chosen for their tolerance to the cold, wet climate.

“The Dogs that Saved Macquarie Island stamps not only feature the dogs that played a part in the eradication campaign, but also portray some of their handlers, along with stunning images of the remote island and its endemic species.”

Simone Sakinofsky designed the stamps. RA Print printed them by offset in sheets of 50.

Australia includes dogs in its Animals of War issue of Oct. 27.

In announcing these stamps, Australia Post’s philatelic manager Michael Zsolt said: “For over a century, in times of conflict we have relied on animals for transport, logistics, communications and companionship. This stamp issue is the second in a five-year program of military-themed stamps. We trust all Australians and especially animal lovers will take the time to reflect on the extraordinary animals which have served our nation.”

Each of the five stamps in this set is denominated 70¢ to pay the domestic rate.

The stamp saluting the dogs of war features a photograph taken in 2008 in Afghanistan of a soldier with his explosive-ordnance detection dog. Also pictured on this stamp are three red poppies and a black-and-white illustration of a soldier and a dog.

The other stamps in this issue honor mules and donkeys, horses, pigeons, and camels. Lisa Christensen designed the stamps. McKellar Renown printed them by offset in a variety of formats, including sheets of 50 and a souvenir sheet with all five of the stamps.

One of Australia Post’s first-day covers pictures Sarbi, Australia’s most decorated war dog, having received the Royal Society of the Prevention of Cruelty to Animals Purple Cross award, the War Dog Operational medal, and the Canine Service medal.

An explosive-ordinance detection dog, Sarbi was declared missing in action in Afghanistan in 2008 after she became separated from her handler, Sgt. David Simpson, during an ambush.

More than a year later, a United States Special Forces soldier found Sarbi, and she was reunited with Simpson. Sarbi succumbed to cancer March 27, 2015.

Romania’s philatelic agency Romfilatelia said, “The four dog breeds which are illustrated on the issue’s stamps are currently used in the role of protection and watchdogs, for processing traces of odor, detection of explosives or illegal substances, as well as in the aid of rescue and relief teams.”

Each stamp includes an emblem in the background, representing one of the dog’s roles. For example, a bomb is pictured along with a Labrador retriever on the 8-leu stamp.

With their keen sense of smell, retrievers can sniff out explosives and narcotics. They also perform search and rescue work.

The 2.40-leu German Shepherd stamp pictures a mountain and red cross in the background, and footprints are shown on the 5-leu Belgian Shepherd Malinois stamp.

A coat of arms symbolizing protection is included on the 9.10-leu Rottweiler stamp.

Cristina Zlatan designed the stamps. They were produced in sheets of 28 and in panes of five with a label commemorating the 65th anniversary of the Cynological Centre Sibiu. Romfilatelia described this center as an institution dedicated to the fulfillment of the man-dog relationship.

Twenty dog breeds are pictured on the first set of stamps in Japan’s Familiar Animals series.

The stamps were issued Oct. 23 in two panes of 10. Each pane includes nine rectangular stamps and one heart-shaped stamp.

In the pane of 52-yen stamps, a Chihuahua is shown on the heart-shaped stamp and in the selvage, and a toy poodle is featured in the pane of 82y stamps.