Working together to stage a fun stamp first-day ceremony 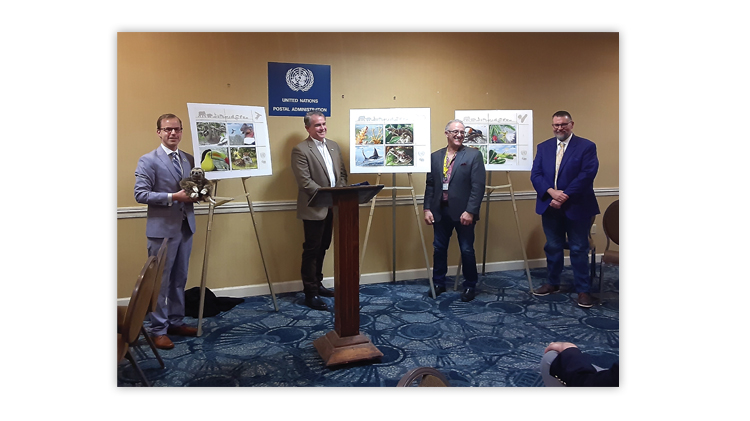 Sometimes a collaboration really comes together to create a fun event. A couple of weeks before the March Party Stamp Show in the Cleveland, Ohio, area, I contacted the show organizers to find out their plans for the United Nations Postal Administration ceremony on their schedule.

To make a long story short, it evolved into my offering to help organize the event, be the master of ceremonies and find a guest speaker.

At the March 18 first-day ceremony for the new U.N. Endangered Species stamps, Caponi gave the welcoming remarks to the audience of about 25 attendees. American Philatelic Society executive director Scott English also spoke at the ceremony.

And one of the highlights of the event was Chris Kuhar, executive director of the Cleveland Metroparks Zoo, who talked about many of the animals shown on the new stamps.

And, because I wanted to do something a little out of the ordinary, I borrowed my youngest son’s three-toed sloth stuffed animal to help with the unveiling. Yes, he was slow in helping pull the cloth off the poster to reveal the stamps.