The logo for the Stockholmia 2019 international stamp show and exhibition is pictured above. On the right is a stamp showing King Carl XVI Gustaf from the 2016 Swedish Royalty souvenir sheet. The king is the royal patron of Stockholmia 2019. 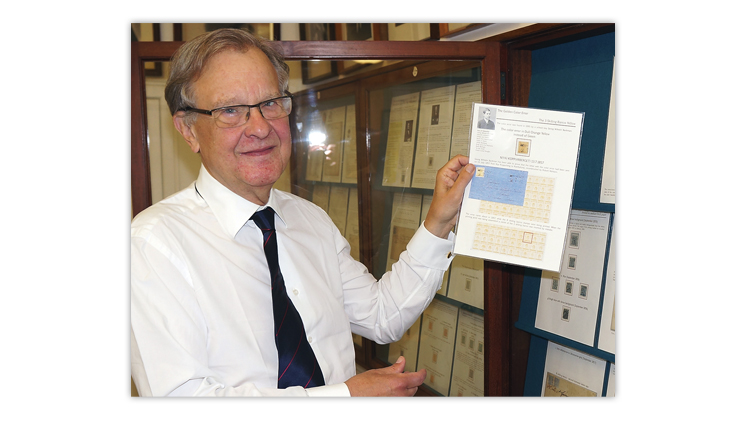 Gustaf Douglas holds the unique 1855 Sweden 3-skilling banco yellow error of color (the Treskilling Yellow, or Three Skilling Yellow). This stamp will be on display in Douglas' exhibit “The Golden Collection of Swedish Philately" in the court of honor. T
Previous
Next

Interested in a scrumptious smorgasbord of world-class philately in a city that sometimes looks like it popped out of a fairy tale? Then make your plans now to attend Stockholmia 2019, the international philatelic show set for late spring in Stockholm, Sweden.

The exhibition will run from Wednesday, May 29, through Sunday, June 2, on four levels at the Waterfront Congress Center. Early birds are invited to the pre-opening party, the “Vernissage,” on the evening of May 28.

Traveling to Sweden does involve a hefty investment, but all of the preliminary publicity indicates that Stockholmia 2019 has all the makings of a show to be remembered for years to come.

Like all international shows, Stockholmia 2019 will have its share of premier philatelic events, including auctions; more than 200 hours of congresses, seminars, roundtables and society meetings; social gatherings; and so much more. The show also will feature dealers, 2,000 frames of exhibits, philatelic rarities, prestigious awards and a literature competition.

The show has the royal touch as King Carl XVI Gustaf of Sweden is its formal patron, and Queen Elizabeth II is sending items from Britain's Royal Philatelic Collection for viewing. The queen is the royal patron of the Royal Philatelic Society London, the world’s oldest stamp society, which celebrates its 150th anniversary in 2019 and is making a huge splash in Sweden.

The Royal, as it is often called, considers its presence at Stockholmia as the international celebration of its sesquicentennial.

I cannot possibly review all that will be at the show, so I urge you to visit the Stockholmia (www.stockholmia2019.se) and Royal Philatelic Society London (www.rpsl.org.uk) websites, but following are a few highlights.

The court of honor will feature rarities. “The Golden Collection of Swedish Philately," Gustaf Douglas' 20-frame exhibit of rare items from 1855 through 1872, is sure to draw many admirers. The exhibit includes the unique 1855 Sweden 3-skilling banco yellow error of color (the Treskilling Yellow, or Three Skilling Yellow). The stamp’s last known sale price was $2.3 million in 1996; Douglas acquired the error stamp in 2013,

Also in the court of honor will be 12 frames from Britain's Royal Philatelic Collection, including the Kirkcudbright cover, which was purchased by Queen Elizabeth II in 2001. The cover bears 10 Penny Black stamps used on May 6, 1840. Some have called this “the first-day cover to end all firstday covers.”

Another exhibit will show items collected firsthand by royalty, including King Farouk I of Egypt, Prince Rainier III of Monaco and King Leopold III of Belgium. There will be two frames of royal stamp treasures from the Smithsonian’s National Postal Museum of the United States.

More than 1,700 frames of competitive exhibits will be judged by a jury of 28 from 14 countries. The chief judge is Lars Englebrecht of Denmark. The four judges from the United States are James Peter Gough, Peter McCann, Stephen Schumann and W. Danforth Walker. Forty philatelists representing the United States will show exhibits. Among these exhibitors are several who have won the American Philatelic Society’s Champion of Champions award.

The Global Philatelic Network is the official auctioneer and will conduct a rarities auction at the show on Saturday in a 1,500-seat auditorium. The network comprises auction houses in five countries, including H.R. Harmer of California. More than 40 other dealers of stamps, covers and postal history have secured booths at the show.

Attending a Stockholmia master class may help exhibitors turn a gold medal exhibit into a large gold exhibit. These roundtable sessions will be run as discussions involving experts. Each master class is limited to only a dozen attendees.

Eleven classes (two to three hours each) will cover current trends in philately, shedding light on the latest advances in such areas as traditional philately, revenues, postal stationery, thematic philately, and social philately.

Numerous speakers will present programs on a great variety of topics, covering many aspects of philately as well parts of the globe.

Aside from the Royal, the show celebrates the 140th anniversary of Bulgarian stamps and the 100th anniversary of the first nonstop transatlantic flight (British aviators made this flight from Newfoundland to Ireland in June 1919).

Collectors can learn about the symbols used on stamps issued by Mauritius, civil censorship during World War II, and how to make a good PowerPoint presentation to accompany a display, just to mention the subjects of a few of the lectures.

Collectors interested in souvenirs or modern collectibles will likely enjoy seven different Stockholmia postmarks offered by PostNord May 28 through June 2. A May 28 cancellation features the Royal logo, and two postmarks — one in English, the other in Swedish — on May 29 honor Alfred Nobel.

Level 3 of the Waterfront Congress Center is reserved for activities of the Royal and the exhibition’s library activities.

The Royal will have a sales and membership information booth. The Royal Expert Committee will offer demonstrations. Also, a special area will be allocated for members to socialize.

A 10-frame “President’s Anniversary Display" by Patrick Maselis will be presented, along with another 10 frames selected from the society’s philatelic collections. Visitors will find a literature exhibition of rare society and Crawford Medal-winning literature.

Maselis has invited four internationally recognized members of the Royal to conduct presentations.

On May 29 Scott Trepel will give a presentation on “The Transcontinental Pony Express 1860-1861 — Nineteen Months of Operation and An Eternity of Fascination.”

On May 30 Henk Slabbinck will present “French Presence in India.”

On May 31 Eddie Bridges will talk on “The Darmstadt Trials of the Union of South Africa: Controversy and Intrigue!”

And on June 1 John Barwis will give a presentation on “Maritime Mail Routes from Victoria.”

Stockholmia 2019 will present an academy for authors, journalists, bibliophiles and publishers. The program extends over four days with no fewer than 55 individual events. Well-known philatelists, connoisseurs and experts await visitors from all over the world. The program is organized by the International Association of Philatelic Journalists under the leadership of its president, Wolfgang Maassen.

A free academy will include new book presentations (up to 25 minutes) of recently published philatelic literature; insights into the world of renowned catalogs and trade journals; lectures and presentation of papers (up to 50 minutes) on subjects of importance to collectors, authors and publishers; and a historical review of the development of philatelic literature in numerous countries. Discussions with the speakers are welcome.

Linn’s Stamp News and Scott catalogs editor-in-chief Jay Bigalke will give two talks as part of the literature program: “Writing for Linn’s Stamp News” May 29 at 1:30 p.m., and “Exploring the Scott Classic Specialized Catalogue of Stamps and Covers, 1840-1940” June 2 at 1:30 p.m., both in room No. 33.

The Swedish Philatelic Federation is a national philatelic partner of the show and will allocate one meeting room all five days for a philatelic program addressing the Swedish-speaking audience.

The International Federation of Stamp Dealer Associations will also conduct its congress at Stockholmia 2019. Also scheduled to meet are the Association of British Philatelic Societies, the World Cinderella Conference, and the European Academy of Philately.

This is the fourth international stamp show held in Stockholm recognized by the Federation Internationale de Philatelie (International Federation of Philately, or FIP); the others were in 1955, 1974 and 1986.

A number of social functions are planned for the show, including a Stockholmia Club dinner on May 29, an excursion to Drottningholm Palace Park on May 31, and the Stockholmia banquet on June 1. To purchase tickets for these functions, visit the show website.

A trip to Stockholmia surely would include spending time to enjoy Scandinavia’s most populous city and the capital of Sweden. With close to a million residents within the city limits, Stockholm stretches across 14 islands where Lake Malaren flows into the Baltic Sea. There are more than 50 bridges in this seaside urban center, which was settled during the Stone Age and officially dates as a city to 1252.

Stockholm’s most popular tourist sites include Gamla Stan (Old Town), where cobblestone streets, winding alleyways, and colorful classic architecture abound. The neighborhood is home to some of the city’s top attractions: the Stockholm Cathedral; Parliament; the Nobel Museum (which houses exhibits about the Nobel Peace Prize and its laureates); the Royal Palace; Stockholm’s oldest street, Kopmangatan; and the Marten Trotzigs grand alleyway, the city’s narrowest pathway at only 35 inches wide at its smallest point.

Skansen, founded in 1891, is the world’s first and oldest open-air museum and illustrates five centuries of Swedish civilization. The huge ship Vasa (226 feet long) was afloat only a few minutes in the city’s harbor in 1628 when it capsized. The ship, considered more than 90 percent intact, was found in the 1950s, was salvaged in the 1960s and became the key artifact in a museum of the same name in 1988. Rosendals Garden on the isle of Djurgarden is a colorful botanical wonder.

One last tip: Bring your sunglasses. Stockholm gets more than 18 hours of sunlight at that time of year.