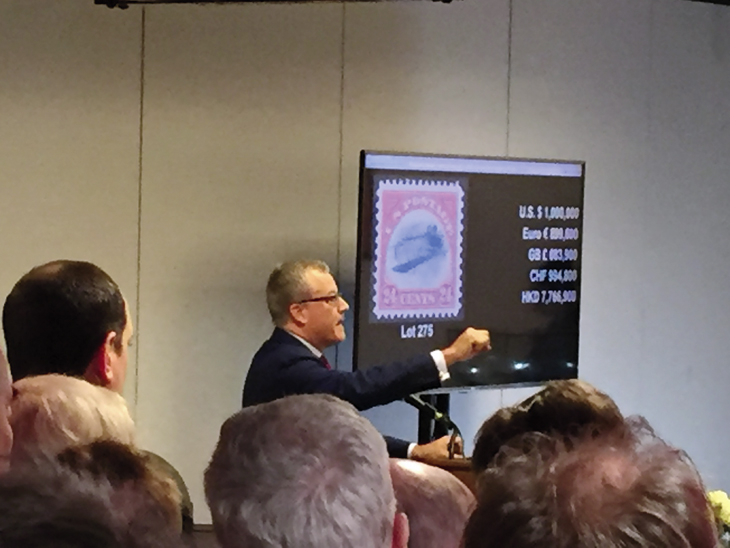 The bid for the highest-graded example to date of the Jenny Invert error had reached $1 million when this photo was snapped by Linn’s New York correspondent Matthew Healey. Scott Trepel, president of Robert A. Siegel Auction Galleries, was taking bids.

By the time you read this, the final curtain on the World Stamp Show-NY 2016 will have been drawn. This magnificent show had much to offer its visitors. Almost 4,500 frames of exhibits were on display, providing collectors with an opportunity to view not only some of the world’s most impressive competitive exhibits but also a court of honor beyond words.

Pride of place, by no surprise, went to the British Guiana 1856 1¢ magenta, the philatelic gem that was sold for almost $9.5 million in 2014 to internationally renowned show designer Stuart Weitzman. But a U.S. rarity stole the show, thanks to the marketing genius of Scott Trepel, president of Robert A. Siegel Auction Galleries.

The stamp, the 1918 24¢ Jenny Invert error, was heavily promoted by the Siegel firm before and during the show. Those attending the show were greeted by a 100-year-old Curtiss Jenny JN-4H biplane that had been torn down, transported to Manhattan’s West Side in trailers, and reconstructed in the Crystal Palace of the Javits Convention Center, the location of WSS-NY 2016.

Trepel was responsible for convincing the biplane’s owner, the Old Rhinebeck Aerodrome in Dutchess County, N.Y., to allow the biplane to be placed on display near the entrance to the show within the Javits Center. Visitors posed for pictures with the plane and purchased covers that could be addressed and placed in a special mailbox. Following the close of the show, when the weather cooperates, the biplane again will be torn down and rebuilt. At that time, the covers will be flown on the biplane after its return to Old Rhinebeck Aerodrome. The 2013 $2 Jenny Invert stamp was affixed to each cover to pay the U.S. first-class letter rate.

The promotion paid off for the Siegel firm who offered at auction during the show the highest-graded example to date of one of the inverted-center Jenny error stamps. During the May 31 auction, the stamp was hammered down by Trepel to an anonymous bidder for a record-breaking $1.175 million. When the 15 percent buyer’s commission was added, the final realization was $1,351,250. The stamp, position 58 from the original pane of 100, received a grade of extra fine-superb 95 from Professional Stamp Experts. The seller of the stamp remains anonymous.

Purchases at the show ranged from sublime rarities to humble souvenirs. One of the most popular items at the show turned out to be the Linn’s Stamp News/Scott catalog philatelic passport produced in cooperation with World Stamp Show-NY 2016.

The Linn’s/Scott booth saw a constant stream of visitors seeking the passport, which was being handed out at our booth. The passport was a hit among show attendees, from the serious collector to the casual attendee who was accompanying a more dedicated collector-spouse. At least one international postal administration at the show, Georgia, ran out of stamps.

Those who missed WSS-NY 2016 likely will need to wait another 10 years for a show of this magnitude to be held in the United States.