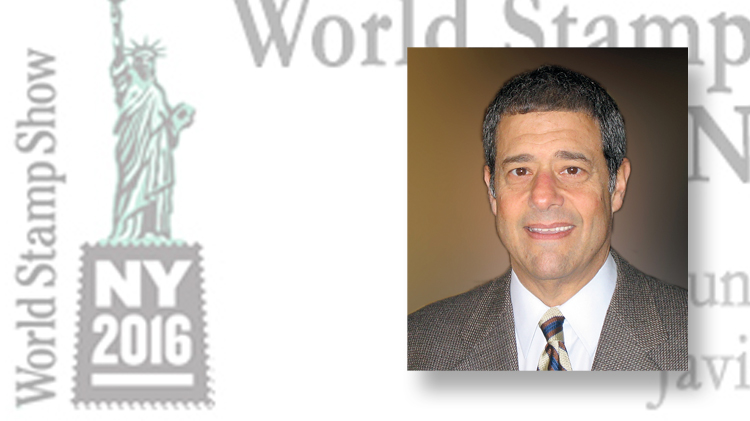 World Stamp Show-NY 2016, the next decennial international show to be held in the United States, will open at the Jacob K. Javits Convention Center in New York City in seven months, May 28-June 4, 2016.

One of the topics that Saadi held forth on was the awards dinner that is scheduled for Thursday, June 2.

As any exhibitor who has ever attended an awards dinner can tell you, they aren’t typically known for brevity and appetizing food.

According to Saadi, he would rather have “teeth extracted without novocaine” than attend an awards banquet at times.

Saadi and the WSS-NY 2016 show committee aim to change these impressions in a big way.

To significantly reduce the time needed to announce the various awards, Saadi said, there will be an afternoon awards ceremony prior to the formal awards banquet.

In this the show committee is taking a page from the Oscars: the lower-tier awards are given earlier, while the bestowing of the major awards, such as best picture, are presented in prime time.

Saadi said that the goal is to have a very short awards presentation at the dinner: “We’re shooting for 15 minutes or so.”

He also promised that “very good” food would be on the menu. “Members of the committee have tasted the food,” he said.

Also on tap for the banquet are two short “entertainment segments.” Saadi said that one of them would be a “surprise,” but he declined to elaborate further.

During the town hall, Saadi announced that the “key sponsor” for the show is the U.S. Postal Service, and the American Philatelic Society is the “key partner.”

In these key roles, Saadi said, the USPS and the APS will play significant roles in ensuring the success of the show.

Moving on to a discussion of dealer interest in WSS-NY 2016, Saadi said that “outside of entrenched negativity” he has observed from some quarters, “it’s the most hype I’ve seen for any international show.”

Of the more than 30 dealers at the ASDA show, just four had not committed to or reserved a booth for WSS-NY 2016.

As for the exhibits, Saadi said that all 4,000 frame sides (two sides per frame) will be filled by the time the show opens.

“We’ve received exhibit applications for a total of 6,400 frame sides,” he said, noting that some tough decisions will have to be made to determine which exhibits actually make it to the show floor.

Show attendees also will have myriad lectures and seminars to choose from during the show’s eight-day run.

“At this point, 16 well-appointed rooms at the Javits center have been reserved for eight hours per day for each day of the show,” Saadi said.

That works out to 1,024 hours of philatelic knowledge and expertise waiting to be dispensed to show goers.

Saadi concluded the meeting by saying that he will have more to say about what is in store for the nation’s next international philatelic extravaganza.

“We’ve got some big things in store for the court of honor at the show,” he said.

Stay tuned, because Linn’s will be standing by to bring you the latest details as they become available.