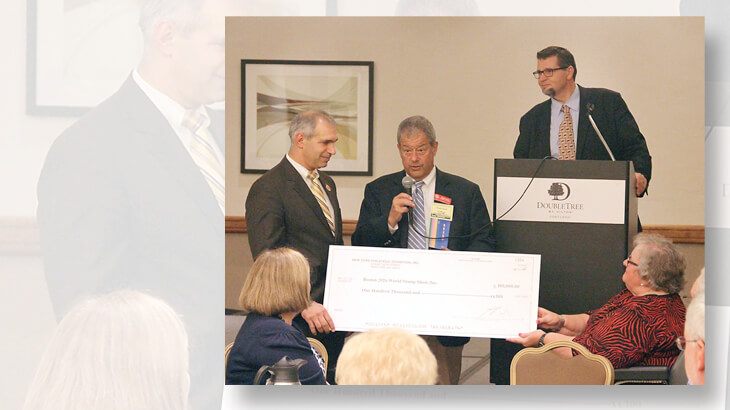 Boston 2026, the next world stamp show scheduled in the United States, will take place May 23-30, 2026, at the Boston Convention and Exhibition Center in Boston, Mass.

“In 2006, Washington 2006 was kind enough to give World Stamp Show 2016 a $100,000 gift as seed money for our effort,” said Saadi during the Tiffany Dinner presentation, “and we would like to do something similar tonight.”

Rod then called Kouri to the podium and presented the check.

“It seems just like yesterday,” Rod told him, “that [Washington 2006 President] Michael Dixon and [CEO] Gordon Morison called me and Wade to the platform and said, ‘We’re done — good luck to you!’

“So we of the World Stamp Show and the organizing committee want to, with our deepest and most heartfelt great wishes, wish you the same success, with a little less trouble, that we had.”

Saadi also spoke Aug. 6 during an afternoon meeting at APS Stampshow, on the subject of World Stamp Show-NY 2016, which ran from May 28 to June 4 at the Javits Center in New York City.

Saadi said that attendance figures for the show will be available in about four to six weeks. APS Manager of Shows and Exhibitions Megan Orient and APS staff members are tabulating the registration information, Saadi said, and those documents will be cleansed of duplicates.

Previous shows relied upon security guard click counts, Saadi noted, which create duplication when people leave for various reasons and then return and are counted again.

Saadi also announced the monetary pledge to Boston 2026 during the Saturday afternoon meeting in Portland.

The APS has received equipment used by the World Stamp Show-NY 2016 committee, such as computers and projectors.

According to insurer Hugh Wood, World Stamp Show-NY 2016 was the first show without philatelic liabilities or damage claims, said Saadi.

The show had 2,250 exhibit frames made new for the show, for a total of 4,250 frames. Those frames are now available for purchase.

Booths were sold to 180 dealers at various prices, and societies used another 80 booths at the international show.

The International Federation of Philately (FIP) charges $75,000 to grant patronage to international show, and the show committee had to pay expenses for room, board and travel for judges and commissioners.

Saadi profusely thanked the close to 400 volunteers who worked long hours to make the World Stamp Show-NY 2016 a success.