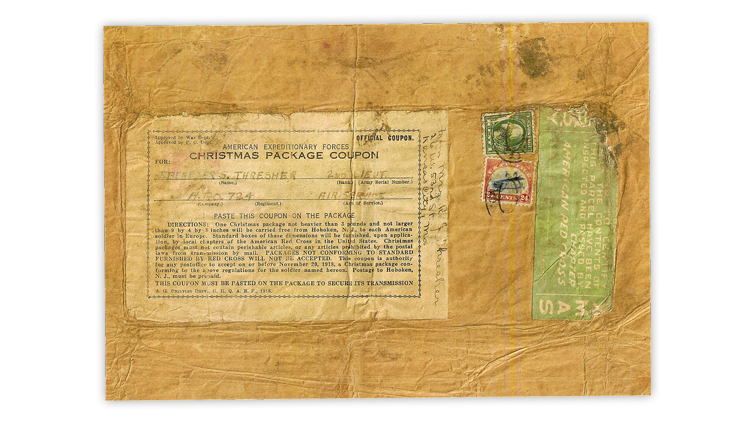 One of three World War I Christmas package labels illustrated in an article by Jesse I. Spector in a recent issue of La Posta: The Journal of American Postal History. The use of the 1918 United States 24¢ bicolor airmail stamp makes it an attractive piece

In previous columns, I have written about American Expeditionary Force “Christmas Package Coupons” such as the example shown here.

One coupon was distributed to each military member (and some civilians working with the military) in or on their way to France in September 1918. The coupon enabled the person to receive one package from home for Christmas 1918.

The coupon was to be sent home to a family member or another person from whom the service member sought a package. The recipient in the United States was to get a standard box from the American Red Cross.

After the box was filled, the American Red Cross was supposed to inspect the contents and certify that they did not contravene postal regulations, then wrap the package, apply the certification label and the coupon, and then mail the package to Hoboken, N.J., for shipment to France.

It seems that few of these Christmas package coupons were preserved after receipt. The three examples I knew of were illustrated in my column in the Jan. 24, 2022, issue of Linn’s.

Since that column, I have been made aware of another six examples.

Three of them, including the example pictured here, were in an article by Jesse I. Spector, published in the Fourth Quarter 2021 issue of La Posta: The Journal of American Postal History. Two of these bear 1918 U.S. airmail stamps, which makes them all the more attractive.

Two more examples are shown in the mid-1990s exhibit by Al Kugel titled “Over There: U.S. Forces Abroad in World War I and Its Aftermath.”

The other used example came from Linn’s reader Andrew Kelley of Denver. It is clipped from a package, and there are no stamps associated with it.

To read the rest of this column about World War I postal history, subscribe to Linn’s Stamp News.