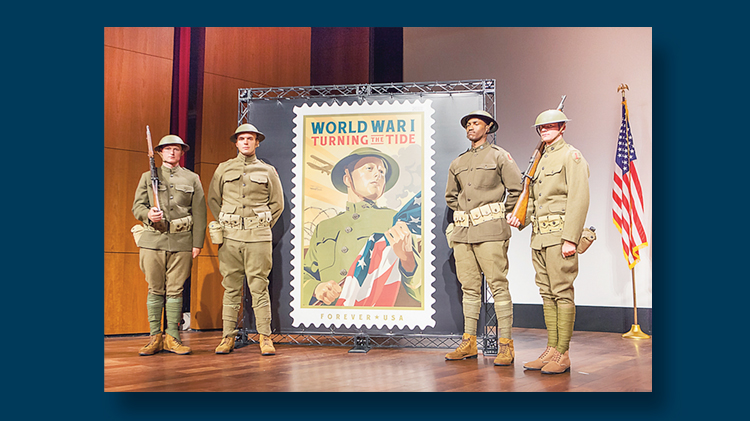 With a musical backdrop by the American Legion Band playing Kansas City (“I’m going to Kansas City, Kansas City here I come”), the United States Postal Service dedicated the World War I — Turning the Tide stamp at a July 27 first-day ceremony. The stamp builds on the “Turning the Tide” theme to mark America’s involvement in the Great War.

The ceremony was held at the National World War I Museum and Monument that overlooks downtown Kansas City, Mo. An audience of 150 people sat comfortably in the large auditorium, and each received a handsome ceremony program with a first-day cancel on the outer envelope.

The Fort Riley (Kans.) Doughboy Honor Guard presented the colors before the national anthem was sung by Christopher Kurt of the Heartland Men’s Chorus.

Lora Vogt, curator of education at the museum, was master of ceremonies. She got a laugh from the crowd when she expressed her preference for self-adhesive stamps, and thanked the Postal Service representatives for that innovation.

“The Postal Service has a long tradition of paying tribute to military heroes through our stamp program,” Marshall said.

“Over the years we’ve delivered millions of cards, letters and packages to our troops deployed in the United States and overseas, both in the regular course of our business and during periods of conflict.”

Marshall also noted that the Postal Service is one of the largest civilian employers of veterans in the United States.

“With the dedication of the stamp today we pay tribute to those who served in World War I, in defense of freedom, and who helped to turn the tide in the course of a conflict that President Wilson characterized as war against mankind and against all nations.”

Matthew Naylor, president of the museum, also spoke. “That the United States Postal Service is contributing to the memory, and the commemoration of those who served in World War I, this founding catastrophe of the 20th century, is fitting, appreciated and appropriate,” he said.

Naylor also acknowledged the contributions of Rep. Emanuel Cleaver II (D-Mo.), who was present at the ceremony, and others, for their roles in making the stamp possible.

Cleaver joined the featured speakers on stage for the unveiling of the stamp.

As the American Legion Band’s wind ensemble played, many of those attending the ceremony moved to the museum lobby for an autograph session.

The Gladstone (Mo.) Stamp Collectors Club had a table at the event to promote the group’s upcoming Aug. 24-25 show.

This was a well-executed event on everyone’s part, and a fitting tribute to an important stamp subject.