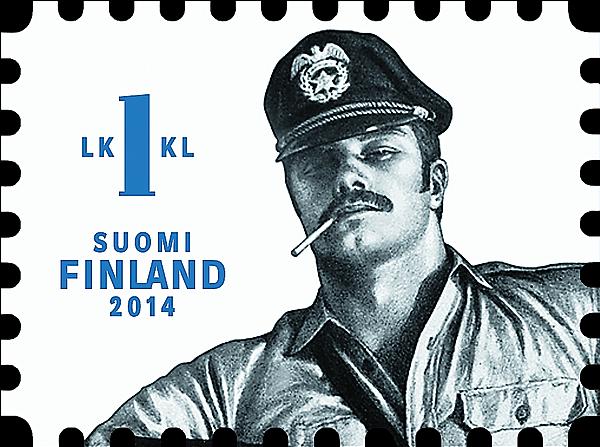 One of the Tom of Finland stamps issued Sept. 8 by Finland’s post office, Itella.

Finland’s post office, Itella, reported Sept. 8 that advance orders for its Tom of Finland souvenir sheet have been delivered to 178 countries, including Sweden, Great Britain, the United States and France.

The souvenir sheet garnered worldwide publicity when it was announced in April (Linn’s, May 5, page 13).

Itella reports that advance sales have been active.

In an Aug. 25 press release, Itella said: “Tom of Finland stamps have raised global interest in the media, in online publications and in social media like no other stamps in the world. Itella has received mainly positive feedback regarding the stamps, and their release has been generally seen as an open-minded and brave act, but the homoerotic nature of the stamps has also been frowned upon.”

On Sept. 8, Itella issued a souvenir sheet with three nondenominated first-class stamps that it describes as picturing two of “Tom of Finland’s masculine homoerotic drawings.”

Tom of Finland is the pseudonym of artist Touko Laaksonen (1920-91).

Markku Penttinen, development director at Itella Posti Oy (the philatelic division), said, “Our goal in the future as well is to publish modern stamps that depict a wide range of themes.”

Designed by Timo Berry, Joh. Enschede of the Netherlands printed the souvenir sheet in a quantity of 200,000. The stamps are self-adhesive.