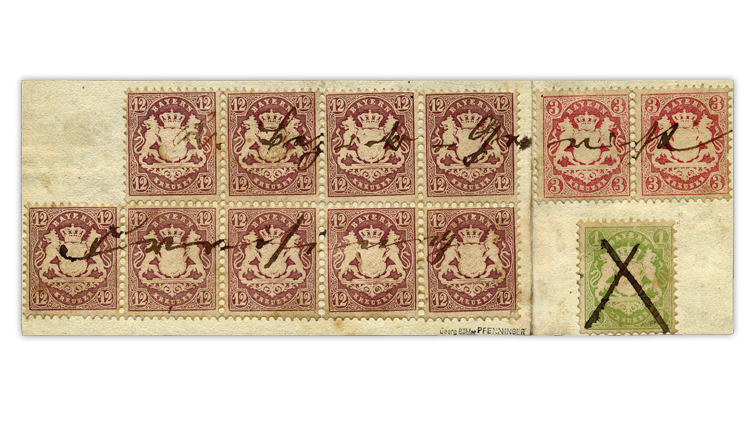 The largest known block of Bavaria’s 1870 12-kreuzer lilac stamp with narrow diamonds watermark is affixed to a piece of a court document and neatly manuscript-canceled. The piece will be offered during the May 26-28 Christoph Gaertner auction.

The 2020 auction season continues for the Christoph Gaertner firm in Germany on May 26-28 with sales of worldwide single lots plus collections and accumulations.

Auction details are posted at the Gaertner website, along with information about online bidding options.

The auction includes more than 2,100 single lots and 4,400 collections. Gaertner notes that for this particular auction, underbids of up to 50 percent are being accepted.

From this last group comes an example of Bavaria’s early embossed Arms issue on piece, which includes the largest known multiple (nine) of the 1870 12-kreuzer lilac with narrow diamonds watermark (Germany Bavaria Scott 29a). Also affixed on this piece are two 3kr rose stamps (24a) and a single 1kr green (23a) from the same issue.

The stamps were used on a court document and are neatly canceled on the piece with a manuscript “K. Bezirksgericht Freising” (Royal District Court of Freising), with the exception of a manuscript “X” that marks the 1kr.

Gaertner describes it as a spectacular uniquity and showpiece. It is offered with a starting bid of €8,000, roughly $8,650 in U.S. dollars in mid-May.

Collectors of modern British material will find a selection of unusual 1997-98 proof material for Machin definitives in 16 lots. These items range from imperforate proof pairs without denominations starting at €170 (about $184), to two varieties of similar proofs on gummed paper in two blocks of 50 starting at €6,500 (about $7,030).