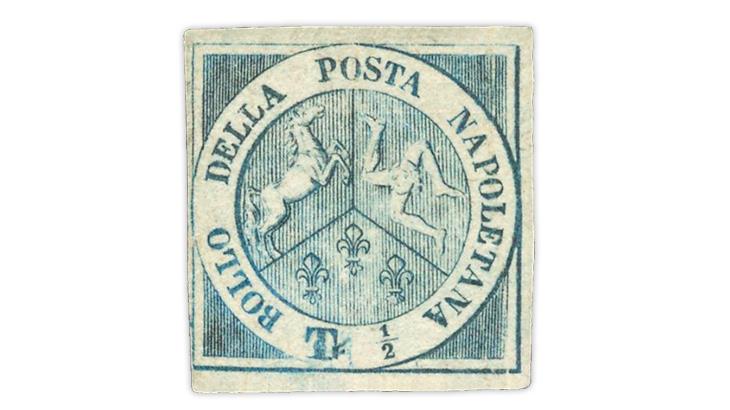 The Oct. 12-16 Christoph Gaertner auction in Germany will include this 1860 rarity from the Kingdom of Two Sicilies, the ½-tornese deep blue Heraldic Symbols stamp. 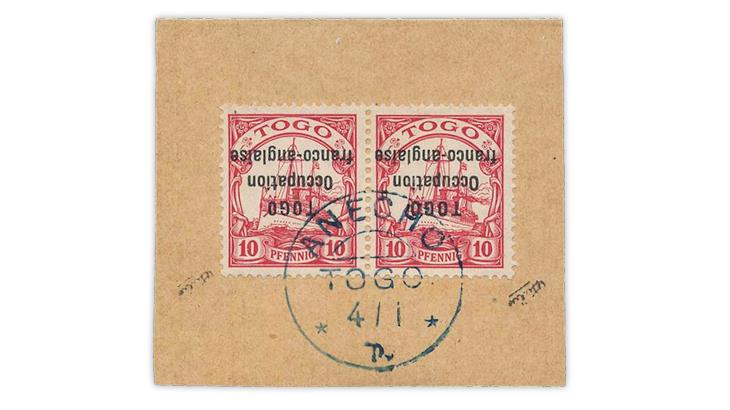 This unusual pair of the Togo 1915 10-pfennig carmine with inverted overprint on piece will be offered in the upcoming Gaertner auction.
Previous
Next

The 48th public auction from the Christoph Gaertner firm in Bietigheim-Bissingen, Germany, will take place Oct. 12-16. The philatelic material is presented in six catalogs, with an additional three catalogs dedicated to coins, paper money and picture postcards.

The auction offers stamps and postal history of Germany, Europe, Asia and the world, with specialized airmail and ship mail listings, plus thematics, collections, large lots, estates and more.

Interested collectors can view the auction online, following the link for “Current Auction.”

Online bidding options are available on the Gaertner site and at Stamp Auction Network.

Stamp collectors will find a truly international variety among the offerings.

One example is an unused 1860 ½-tornese deep blue Heraldic Symbols stamp issued by the provisional government of the Kingdom of Two Sicilies (Scott 8).

In the Scott catalog, Two Sicilies is listed among the Italian states. In the Gaertner auction catalog (and in the Michel German stamp catalog), it is listed with the name Neapel.

The unused stamp is a remarkable rarity, with a Scott catalog value of $250,000 and a similar equivalent value in the Michel catalog.

Gaertner describes the stamp as having “mint original gum with slight hinge remnants” and margins ranging from close to wide. There is a natural vertical paper fold at right due to “production process,” not a fault, Gaertner adds.

The stamp is signed Grobe and Sorani with certificates from the same sources: Grobe (1975) and Sorani (2002). Authentication is important considering that the Scott catalog warns of dangerous forgeries.

Another rarely seen item made available in this sale is Togo’s 1915 10-pfennig carmine stamp as a pair on piece, with the inverted overprint on both stamps (Scott 166a).

Gaertner describes this as “an extreme rarity of the French occupation of Togo” and offers it with a 1989 Peter Holcombe authentication certificate at a starting bid of €15,000 ($17,450).

The single used stamp with inverted overprint is listed in the 2020 Scott Classic Specialized Catalogue of Stamps and Covers at $16,500, with the value in italics to denote an item that can be difficult to value accurately.

The Thursday and Friday auction sessions offer collections and larger lots from Germany, Europe and worldwide.