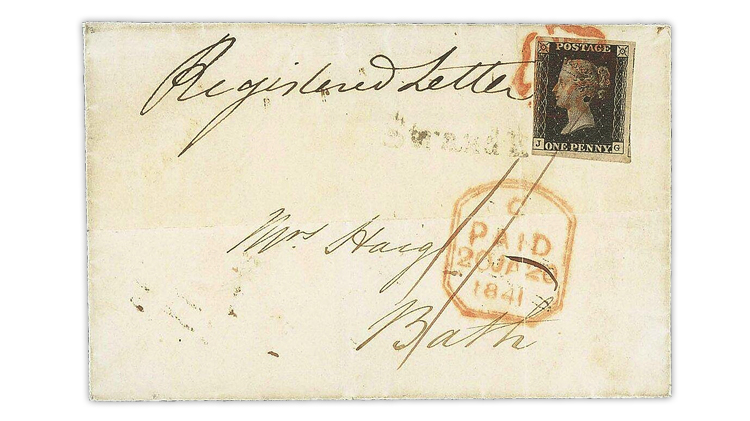 The earliest known registered cover franked with the 1840 Great Britain Penny Black will be offered at auction by Spink in London on Oct. 6 as part of the Alan Holyoake collection of British and international registered mail.

The Spink auction firm in London, England, has scheduled two auctions for Oct. 6 and 7 at the Royal Philatelic Society London, 15 Abchurch Lane in London.

The Wednesday sale will offer the Alan Holyoake grand prix collection of British and international registered mail. The auction on Thursday will feature stamps and covers of the world.

These sales begin each day at 10 a.m. London time.

The catalog for the Holyoake collection explains that registered mail was introduced in Britain on Jan. 6, 1841.

“This service required an additional fee of one shilling (1/-) to be paid in cash and the address side of the letter was marked accordingly. With pressure from Roland Hill the rate was reduced to 6d in 1848, and further reductions were made in later years. There was no compensation offered for losses until 1878.

“The Foreign Branch were responsible for registered mail being sent or received from overseas and they employed several handstamps to apply to such letters. The usual format was a crown incorporating the word ‘Registered.’”

The auction catalog also illustrates markings associated with this service in its three-page introduction.

The early items in the sale are stampless covers mailed between 1841 and 1847.

Included in this sale is a wrapper mailed Jan. 20, 1841, to Bath, franked with an 1840 Penny Black (Scott 1) from plate 5 showing the position letters J-G, the earliest known example of registered mail franked with the world’s first postage stamp. The stamp is described by Spink as having exceptional margins and well tied by an orange red Maltese Cross postmark and a faint strike of “Strand W.O.” in black.

The cover also bears a large script “Registered Letter,” a London Paid despatch datestamp, and a manuscript “1/-” for the registration.

The registered mail auction includes 321 lots with items from countries around the world including mail from Canada to the United Kingdom, mail sent to Canada and the United States, and more.

Along with stamps and covers, the Thursday sale includes many British Commonwealth proofs and essays.

Cape of Good Hope is represented by numerous examples of the triangle issues.

Also from the Commonwealth is a top left corner unused example of the 1922 £50 brown and black King George V stamp of Kenya, Uganda and Tanzania (Scott 41D) with plate number, described by Spink as “mounted in the selvedge only” and “one of the finest known examples.”

The Spink website includes illustrated catalogs for both sales, with online bidding options.