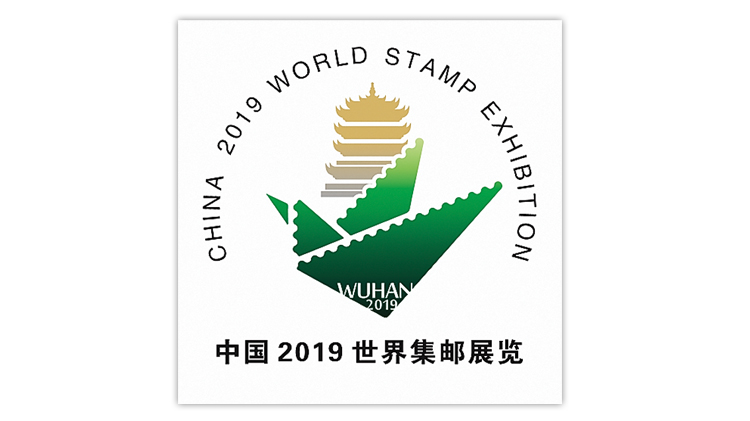 The China 2019 World Stamp Exhibition will take place June 11-17 in Wuhan, China. The show logo features an origami pigeon. In the background is the Yellow Crane Tower in Wuhan.

The China 2019 World Stamp Exhibition will take place June 11-17 at the Wuhan International Expo Center on Yingwu Avenue in Wuhan, Hubei Province, China. The sprawling city of Wuhan, with a population of more than 10 million, is part of the Yangtze River Economic Belt and the capital of central China’s Hubei province. It is located nearly 700 miles south of Beijing and roughly the same distance north of Hong Kong.

The China World Stamp Exhibition is the only FIP (International Federation of Philately) World Exhibition taking place in 2019, according to FIP president Bernard Beston.

“With 3,500 frames for exhibitions, seven days duration, and a huge number of postal administrations and stamp dealers, this is the philatelic event of the year,” Beston said in his published message to show visitors.

“The purpose of the exhibition is to celebrate the 70th anniversary of the founding of the People’s Republic of China, to promote the exchange of Chinese and foreign philatelic culture, enhance the friendly exchanges and cooperation between China and the rest of the world and further develop postal and philatelic services,” an introductory message online explained.

Each day of the exhibition has a special designation, beginning with the Day of Opening, and continuing with Day of One Belt One Road International Communication, Day of Jing Chu culture, Day of Youth Philately, Day of Members, Day of Military World Games, and Day of Closing.

The Day of Military World Games (June 16) will include a first-day ceremony for China’s stamps promoting the 7th International Military Sports Council (CISM) World Games. The games will take place Oct. 15-30 in Wuhan, with 23 competitive sports including basketball, triathlon, cycling, swimming and more.

The stamp show logo features an origami pigeon with perforated edges in front of an image of Wuhan’s Yellow Crane Tower.

The China 2019 World Stamp Exhibition is held under the auspices of the FIAP (Federation of Inter-Asian Philately), is organized by the State Post Bureau of the People’s Republic of China, and co-organized by the Wuhan Municipal People’s Government, China Post Group, All-China Philatelic Federation and Hubei Provincial Department of Transportation.

Additional information about the show can be found at http://china2019stamp.org.

Thinking outside the stamp exhibition frame