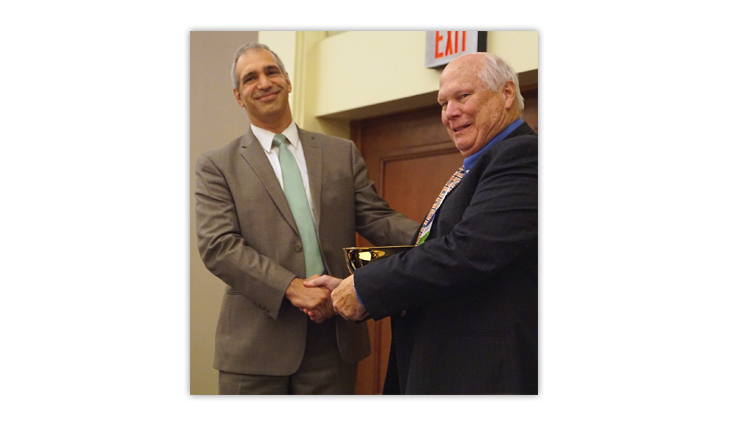 The prestigious award recognizes Kouri’s philatelic exhibit, “The First Postal Issues of the Spanish Antilles (1855-1865),” as the top national exhibit of the past year.

The win is Kouri’s first Champion of Champions award.

His exhibit was one of the 31 qualifying exhibits that claimed the grand award at an APS-sponsored national stamp show during the past exhibiting year, which ran from July 2018 through June 2019.

All 31 exhibits were on display at the Aug. 1-4 APS Stampshow and entered into head-to-head competition.

Kouri’s exhibit qualified after winning the grand award at Florex 2018, the annual show sponsored by the Florida Stamp Dealers Association and the Central Florida Stamp Club. Florex was held Nov. 30-Dec. 2 in Kissimmee.

The winning exhibit sets out to illustrate every possible aspect of the production and usage of the first postal issues of Spanish Antilles.

In the exhibit’s introduction, Kouri explained that the stamps were intended to be used in Cuba and Puerto Rico, but they were valid in the Philippine Islands and were used for a short time by soldiers and civilians during Spanish military incursions in Mexico in 1862, and the Dominican Republic from 1862 to 1864.

Among the rarities in the exhibit are first-day covers, exceptional registered letters, and “every known use of the Y¼ stamps” (overprints applied in 1855 and 1860 for an internal mail service).

“This was the first provisional and the first overprinted stamp issue of the world (valid within a country),” Kouri said.

Major award winners for the American Topical Association’s National Topical Stamp Show, which was held in association with APS Stampshow, included the multiframe grand award to Norman F. Jacobs for “Tennis — From Game of Kings to Sport for All,” and the one-frame grand award to Mark C. Maestrone for “Men’s Gymnastics: Dressed to Win.”

For additional information about the American Philatelic Society, visit www.stamps.org. The website of the American Topical Association is www.americantopicalassn.org.