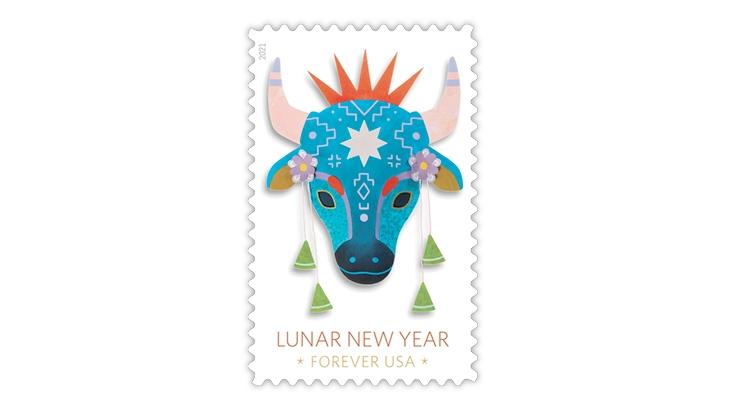 Camille Chew’s three-dimensional art is featured on the second stamp in the current Lunar New Year series from the United States Postal Service. The commemorative stamp celebrating the Year of the Ox has a Feb. 2 issue date. 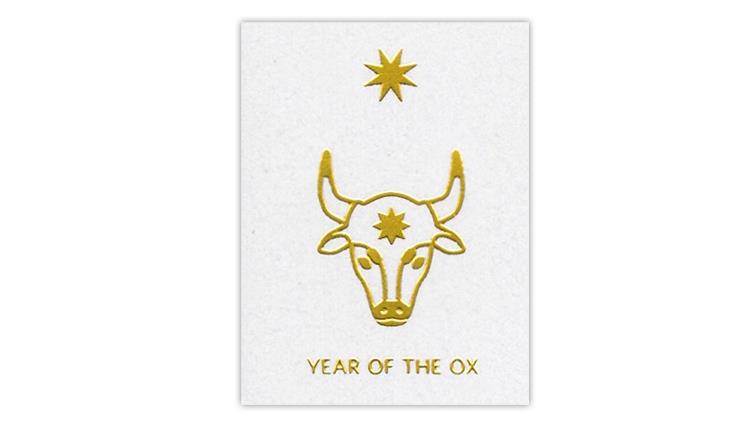 A simplified sketch of the new Year of the Ox stamp design appeared as part of the illustration in the margins of last year’s Year of the Rat stamp pane. 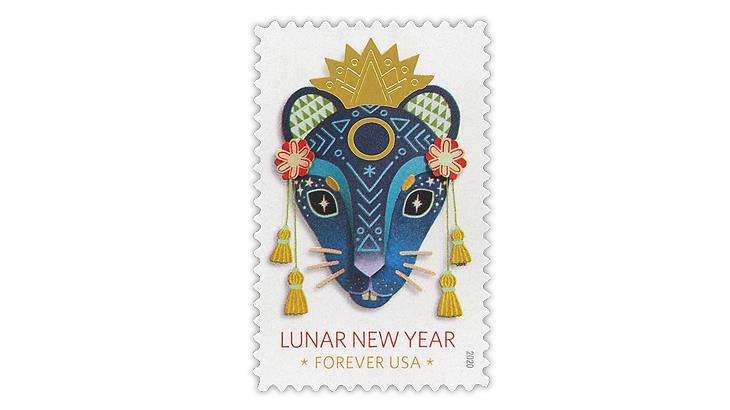 The 2020 Year of the Rat stamp was the first issue in the current Lunar New Year series and introduced artist Camille Chew’s paper designs. 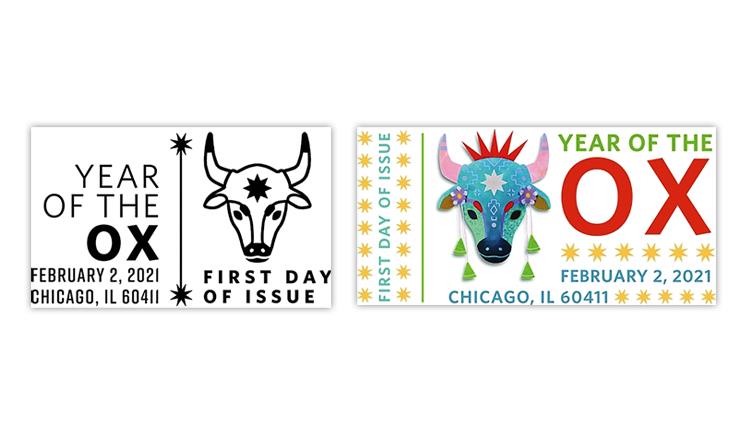 Versions of the ox design corresponding to the margin illustration and the finished stamp design, respectively, are shown on these two pictorial first-day cancels.
Previous
Next

The nondenominated (55¢) stamp is the second issue in the current Lunar New Year stamp series from the Postal Service.

Instructions for accessing the event can be found on the USPS website.

Because of the COVID-19 pandemic, the Postal Service has not scheduled a ceremony open to the public for nearly a year.

The new forever stamp, similar to its 2020 Year of the Rat counterpart, will be issued in a pane of 20 and features the image of a three-dimensional paper mask depicting the animal of the year.

The intricate artwork was crafted by artist Camille Chew, photographed, and then used for the vignette of the stamp designed by USPS art director Antonio Alcala.

The ox design was shown previously as one of 12 simple sketches in the margin of the stamp pane for the 2020 Year of the Rat stamp (Scott 5428).

“With pops of the very lucky color red on the horns and face, the ox mask in the stamp design incorporates elements with symbolic meaning,” according to the Postal Service. “Several of the patterns were created with the style of Asian textiles in mind as well as purple flowers that represent the arrival of spring, which Lunar New Year also signals in Chinese culture. The star in the center of the ox’s head references the celestial themes of the Chinese zodiac.”

Chew is creating the designs for all of the stamps in the current New Year series of 12.

Certain traits have been attributed to people depending upon the year in which they are born. People born in the Year of the Ox, for example, “are strong, reliable, fair and conscientious, inspiring confidence in others,” according to the Victoria and Albert Museum. “They are also calm, patient, methodical and can be trusted.”

Stamps marking the Lunar New Year are popular with collectors and mailers worldwide.

The new stamp will be printed by five-color offset lithography with accents in both gold and orange foil.

Banknote Corporation of America printed the stamp on its Gallus RCS press, which was used previously for the 2020 Year of the Rat forever stamp (Scott 5428) and Celebrate forever stamp (5434), the 2019 Transcontinental Railroad set of three (5378-5380) and Woodstock Music Festival forever stamp (5409), and others.

Two pictorial first-day cancels were created for the Year of the Ox stamp. The black postmark shows a depiction very similar to the marginal rendition of the ox design. The color postmark appears to show the paper illustration pictured on the stamp.