Young Americans on stamps of Japan and Russia 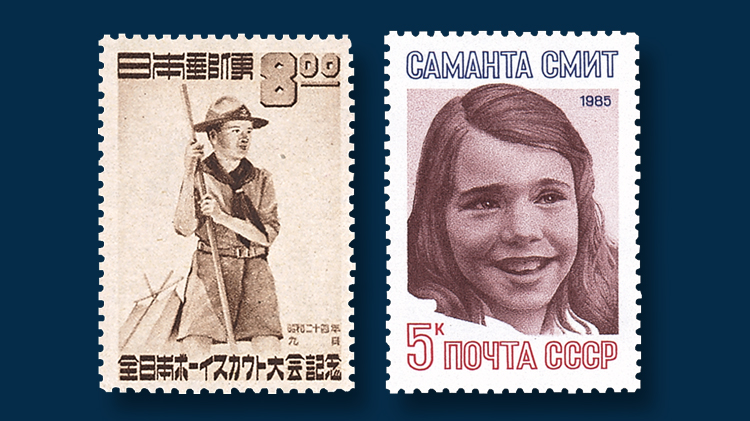 Two young Americans are pictured on these Japanese and Russian commemorative stamps issued in 1949 and 1985, respectively. 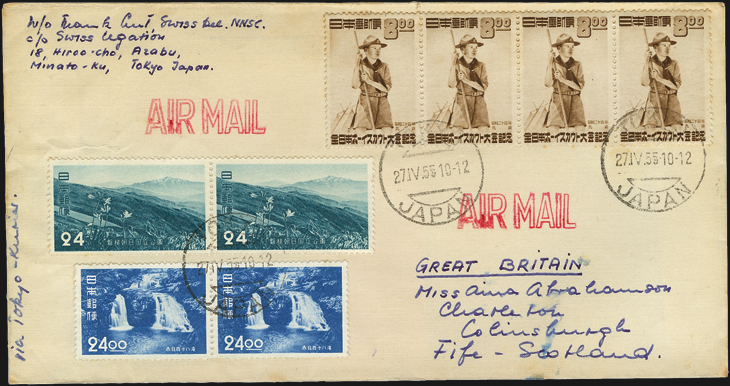 An interest — some would say an obsession — of mine is living Americans depicted on United States stamps. I have developed a list of almost 70 U.S. stamps with images of living Americans who are either directly portrayed on a stamp or who have served as a model for a stamp’s design.

For this column, I am expanding the topic to include living Americans who are depicted on foreign stamps with the example of the Boy Scout on the Japanese stamp shown on the left in the first image above, and on the 1955 cover illustrated in the second image above.

There are many other living Americans on foreign stamps, including U.S. presidents, often shown visiting foreign leaders; astronauts; and famous authors and film stars. But those people are instantly recognizable; not so with the young man depicted on the 1949 8y Japanese stamp.

The scout shown is George Paxton Russell of St. Petersburg, Fla., according to the book Stamp Curiosities by R.J. Sutton (New York Philosophical Library, 1958). Other sources, including the American Topical Association’s handbook Scout Stamps of the World, indicate that Russell was from New Jersey.

The picture of Russell was taken more than a decade earlier and was used as an illustration in the Boy Scouts of America’s Scout Field Book.

How the illustration came to be used on the Japanese stamp I don’t know.

Another American youngster on a foreign stamp was unfortunately not alive at the time her stamp was issued on Dec. 25, 1985 (Scott 5414). In fact the Soviet Union called it a memorial stamp.

The stamp is pictured on the right in the first image above. The honoree was Samantha Smith. In 1982, when she was a 10-year old schoolgirl in Maine, Smith sent a letter to Yuri Andropov, general secretary of the Communist Party of the Soviet Union. In the letter, she asked that the superpowers work toward a more peaceful world.

Recognizing a public relations opportunity, someone on Andropov’s staff crafted a response in which Andropov agreed that peace was a worthy goal, and invited Smith to visit the Soviet Union. Her trip took place in 1983.

The Soviet press had a field day, portraying Smith as a symbol of peace-loving American people at odds with the policies of their government.

This fairy-tale story came to an unhappy end when on Aug. 25, 1985, Smith and her father were two of six on board a Bar Harbor Airlines flight that crashed short of the runway while attempting to land at night in rainy conditions at the Lewiston-Auburn Regional Airport in Auburn, Maine.

The crash was determined to be caused by a combination of the conditions, pilot error, and a ground radar failure.

Among the many tributes to her memory, the Soviets issued the aforementioned 5-kopeck stamp. This commemorative was featured on a souvenir card distributed at the Soviet Union’s philatelic agency booth at Ameripex 86, the United States international stamp show that took place in Chicago that year.

If Linn’s readers know of other not-so-famous Americans who have been pictured on foreign stamps, I would like to hear from you. Please contact me at Box 1125, Falls Church, VA 22041-0125, or by email at jmhstamp@verizon.net.