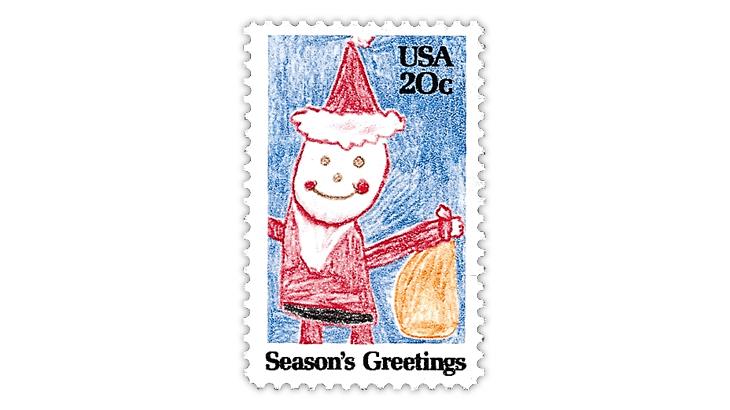 The cartoon caption contest image for November is the 1984 United States 20¢ stamp showing an illustration of Santa Claus by 7-year-old Danny LaBoccetta, one of two winners in the 1982 nationwide contest to choose youth art for two U.S. stamps. Entries mu 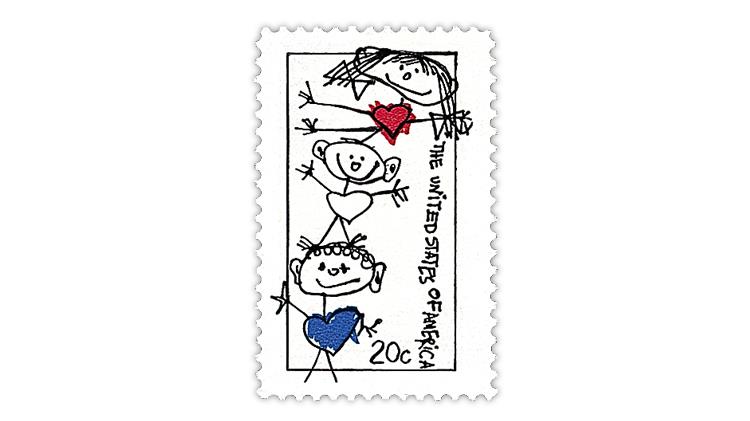 The other winner in the 1982 youth design contest was this portrayal of family unity by Molly LaRue. The stamp was issued Oct. 1, 1984.
Previous
Next

If Santa Claus were to come down the chimney and see the November cartoon caption contest stamp on an envelope, he might not recognize himself.

This is because the image on this 1984 20¢ Christmas stamp (Scott 2108) was drawn in crayon by 7-year-old Danny LaBoccetta, who was a third-grader at Our Lady of Perpetual Help School in Jamaica, N.Y., at the time. He was in fifth grade when the stamp was issued on Oct. 30, 1984.

LaBoccetta’s drawing was one of 500,000 entries submitted in 1982 as part of a nationwide contest sponsored by the U.S. Postal Service to come up with two designs for U.S. stamps.

The other winner was high school senior Molly LaRue, whose Family Unity design was featured on a 20¢ stamp issued Oct. 1, 1984 (Scott 2104). That stamp is shown here.

The challenge for Linn’s readers in this month’s contest is to imagine yourself as the figure of LaBoccetta’s Santa Claus and to tell me what you might be saying or thinking as you contemplate your appearance on the stamp or your next round of visits to the world’s children.

You can comment on stamp collecting, youth art, Santa’s allure, politics, the cost of presents or whatever else comes to mind.

Entries must reach me no later than Nov. 26.

October cartoon caption contest takes a ride in a 1953 Corvette