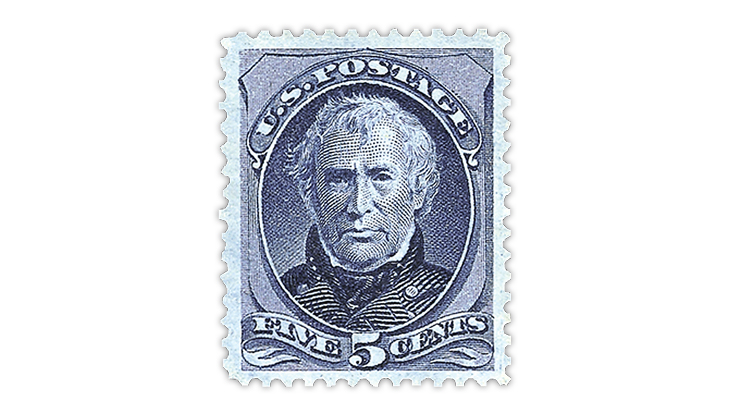 Zachary Taylor (1784-1850) was the 12th president of the United States, the fourth military hero to be elected president and the second president to die in office. He was also the last president born in the 1700s.

Commissioned as a first lieutenant in the U.S. Army in 1808, he served in the War of 1812, the Blackhawk War and the Second Seminole War. He won lasting fame in the Mexican-American War (1846-48) as the commander of the victorious American forces at the battles of Palo Alto, Resaca de la Palma, Monterrey and Buena Vista.

Although he considered himself an independent and disliked partisan politics, he accepted the Whig Party’s nomination for president in 1848. He won in a three-way race against Democrat Lewis Cass and Free Soil Party candidate and former president Martin van Buren.

Taylor served in office just 16 months, dying from fever and a digestive ailment at age 65.

In June 1875, the U.S. Post Office Department issued a 5¢ blue Zachary Taylor stamp (Scott 179) in anticipation of the 25th anniversary of his death. The stamp, printed by the Continental Bank Note Co. on yellowish wove paper, is perforated gauge 12. A similar stamp on soft porous paper was printed by the American Bank Note Co. (Scott 185).

The earlier stamp on hard wove paper snaps when you flick it with your finger or thumb; the stamp on soft paper does not. Soft paper has a defined weave visible when viewed through a strong light, and it is thicker than hard paper.

The 2019 Scott Specialized Catalogue of United States Stamps and Covers values the stamp on hard wove paper in unused original gum condition at $700. For a stamp in the grade of very fine with no faults or flaws, that is not a bad price.

If that is too rich for your blood, the stamp is valued in used condition at $25 and in unused no gum condition at $240. Stamps in very fine grade and in those conditions are a good buy at near those prices. For used stamps, examples canceled with colors of ink other than black bring a premium.