Qatari cacheted first-day covers, such as this one for the 1972 Independence Day First Anniversary issue (Scott 317-320), are in demand and selling at surprisingly high prices. 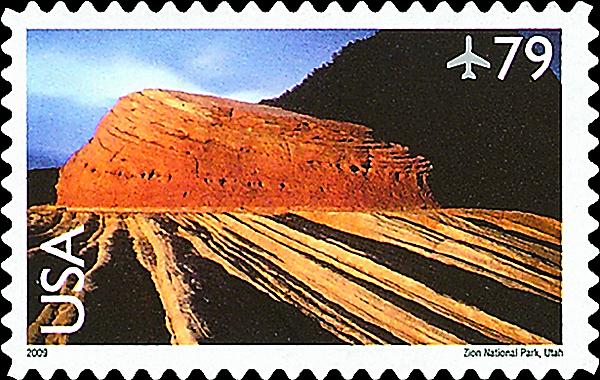 Mint panes of 20 of the 2009 79¢ Zion National Park Utah airmail stamp in the American Landscapes series (Scott C146) are popular with collectors and are a good buy in the $25-to-$30 price range.

United States — The U.S. Postal Service kicked off the Scenic American Landscapes series of airmail stamps May 12, 1999, with the 48¢ Niagara Falls stamp (Scott C133). It quickly became one of the most popular recent U.S. stamp series with collectors.

The designs in the Scenic American Landscapes series offer colorful views of breathtaking landscapes across America. Many of the stamps were on sale for only a short period of time due to changing postal rates.

The mint panes of 20 in which they were issued is a popular collecting format with many collectors.

On June 28, 2009, the Postal Service issued a 79¢ Zion National Park Utah airmail stamp (Scott C146). The 2014 Scott Specialized Catalogue of United States Stamps and Covers values the mint stamp at $1.60 and a mint pane of 20 at $32. Both values are roughly double face value, the catalog minimum for recent mint stamps.

This stamp is one of the better issues in this popular series. Some dealers are paying more than face value for mint panes of 20. If you find a mint pane of 20 offered in the $25-to-$30 price range, it is a decent buy.

An emirate, Qatar has been ruled by the Al Thani family since the 19th century. It has the highest per capita income in the world, primarily due to huge natural gas and oil reserves.

Qataris are overwhelmingly adherents of Wahabist Islam, the official state religion, and the country has been known for its ruling family’s support of Islamist movements elsewhere in the Middle East. Qatar made headlines recently when it agreed to take in five top Taliban detainees who were being released from the U.S. prison in Guantanamo Bay, Cuba.

Several years ago, there was notable speculation in Qatari mint stamp sets, supposedly because of large scale buying by someone in the Qatari royal family.

While prices for mint stamps fueled by speculation have cooled, demand remains surprisingly strong for Qatari cacheted first-day covers. For example, a cacheted FDC for the Sept. 3, 1972, Independence Day First Anniversary set (Scott 317-320) recently sold in an online auction for the equivalent of $80. The 2014 Scott Standard Postage Stamp Catalogue values the mint set at $27. FDCs for other sets have been selling equally well.

While Qatari FDCs are uncommon, you might be able to find some cheaply in dealers’ cover boxes at stamp shows, as few nonspecialist dealers or collectors would suspect they are as valuable as they are. — H.G.