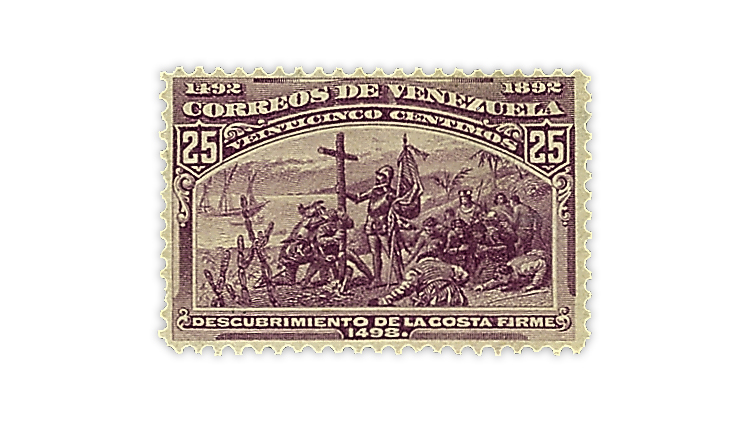 Venezuela’s 1893 25-centimo Landing of Columbus stamp (Scott 136) is an excellent buy in unused original gum condition at the Scott Classic Specialized Catalogue of Stamps and Covers 1840-1940 value of $20.

The World’s Columbian Exposition held May 1 to Oct. 30, 1893, in Chicago celebrated the 400th anniversary of Christopher Columbus’ discovery of the New World. In conjunction with the exposition, the United States Post Office Department issued a set of 16 beautifully engraved commemorative stamps (Scott 230-245). This set has long been a favorite of U.S. stamp collectors.

Many collectors might not be aware that Venezuela also issued a stamp to honor Columbus and to commemorate its participation in the exposition. The engraved 25-centimo magenta Landing of Columbus stamp (Scott 136) depicts Columbus’ discovery of the mainland of South America. The stamp was printed by the American Bank Note Co., the same printer that produced the U.S. set, and may have had the same designers and engravers.

The market for Latin American stamps is quite active, and Venezuela is a popular country. Columbus and his voyages of discovery remain one of the most popular topical collecting subjects.

The Scott Classic Specialized Catalogue of Stamps and Covers 1840-1940 values the Venezuelan stamp at $20 in unused, original gum condition. The stamp is an excellent buy if you find it offered at Scott catalog value.