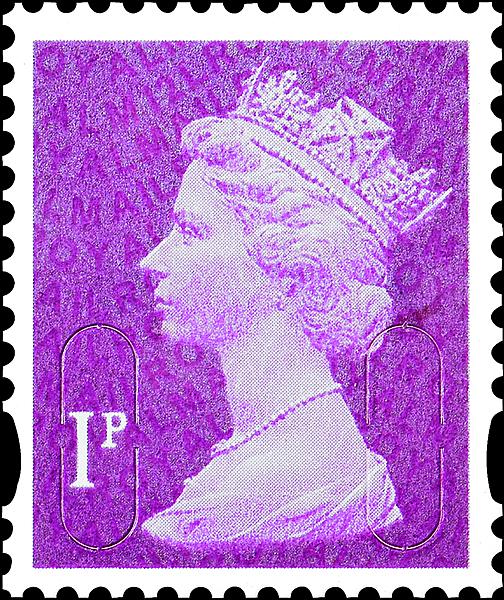 Figure 3. The “ROYAL MAIL” iridescent overprint can be seen on this image of the 1-penny Machin stamp issued in 2013.

Figure 1. British Machin stamps in new colors were issued by Royal Mail March 26. The 97-penny denomination is purple heather, and the £1.47 is dove gray.

Every year around March, Royal Mail (the British post office) announces changes in rates of its most-used services. Usually, the changes are increases.

This necessitates the introduction to the Machin definitive series of new denominations in different colors. The nickname for this long-running definitive stamp series is derived from the surname of Arnold Machin, the sculptor who created the original plaster relief of Queen Elizabeth’s profile that appears on the stamps.

The third step rate for letters to Europe weighing more than 20 grams but less than 60 grams to Europe increased to £1.47. This stamp is printed in dove gray.

Figure 2 shows the other two new denominations, a marine turquoise £2.15 and a holly green 81p.

Surface mail, which is now called international economy by Royal Mail, increased from 78p to 81p for up to and including 20 grams.

The worldwide airmail rate up to 20 grams is now £1.28, which is covered by an existing Machin series stamp printed in emerald and issued in 2012 (Scott MH417). Stamps bearing the year code for 2014 are likely to appear this year.

This array of colors for Machin stamps received its name because it was introduced by Royal Mail in the queen’s diamond jubilee year, 2013.

Collector reaction to the new colors has been mixed.

One seller in Britain labeled them “tasteful tones,” while another called them “insipid.”

Since February 2009, British definitives have been overprinted for security purposes with the words “ROYAL MAIL” repeated in wavy lines in iridescent ink. Figure 3 shows the 2013 1p stamp with this security overprint (Scott MH420).

Year codes, and sometimes source codes, are embedded in this text. They can be seen by holding a stamp at eye level obliquely to a bright light.

On the new stamps issued March 26, the year code for 2014 is embedded in the security overprint.

The iridescent text of the word “MAIL” located in front of the queen’s diadem has had the “AI” replaced with the year indicator “14,” making the year code “M14L.”

The year code usually indicates the year in which the stamps were printed, not necessarily the year they were issued.

Because the four new stamps are issued only in sheet format and because stamps from sheets do not have a code designating the source, they do not have a source code embedded in the security overprint.

On the stamp for large-size mail items, the year code is located in front of the queen’s chin above the “ge” in “Large.”

In addition to the year code embedded in the iridescent security overprint, stamps whose source is other than regular sheets have an embedded source code.

For example, the nondenominated first-class stamp with the 2014 year code was issued in booklets of 12. The source code “T” for 12 is embedded in the word “MAIL” in the upper right corner above the diadem, replacing the letter “A” to form “MTIL.”

All of these stamps have the year code for 2014 in front of the diadem and the source code “P” for prestige booklet embedded in the security overprint above the diadem.

The iridescent overprint on these stamps is often blurred and indistinct, making the year and source codes difficult to detect.

A custom booklet, which contains a combination of two commemoratives and four first-class Machin definitives, also was issued in conjunction with the Buckingham Palace stamps.

The definitive stamps in this booklet bear the 2014 year code and the source code “C” for custom booklet.

The Machin series, now 47 years old, continues to expand every year with new denominations for rate changes and varieties provided by new colors and the security features.