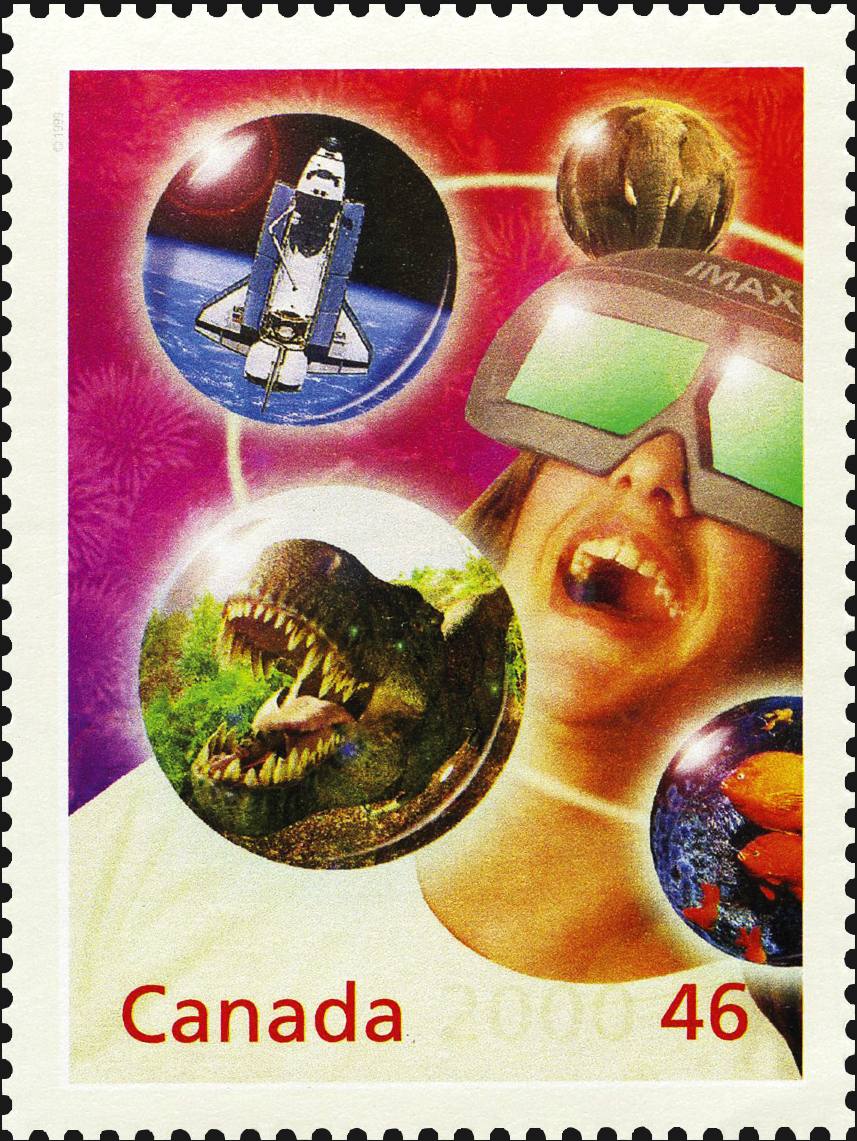 A hungry Tyrannosaurus rex is among the sights to see on this 1999 46¢ Millennium stamp (Scott 1818a) celebrating the success of Canada’s IMAX Corporation.

The 1998 46¢ Scenic Highways stamp for the Dinosaur Trail (Scott 1740) looks like a cautionary tale about the risks of picking up hitchhikers in Alberta’s badlands. 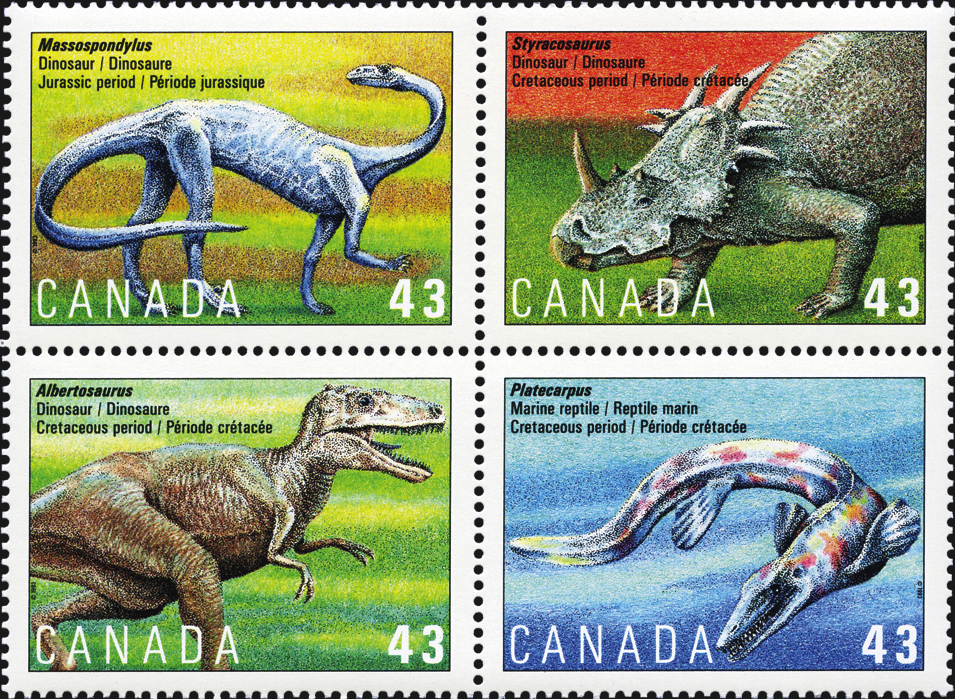 Part of a 16-stamp series on Prehistoric Life in Canada, this 1993 se-tenant 43¢ block of four (Scott 1498a) was the first to depict Canadian dinosaurs of the Jurassic and Cretaceous periods. Clockwise from bottom left are the Albertosaurus, Masso 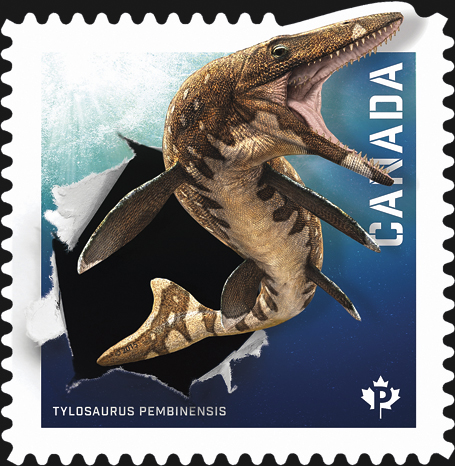 Tylosaurus pembinensis was a mosasaur — a huge, paddle-limbed carnivorous marine lizard closely related to the modern monitor lizard and to large snakes. Reaching lengths approaching 50 feet, it was the chief predator in the Western Interior Seaw 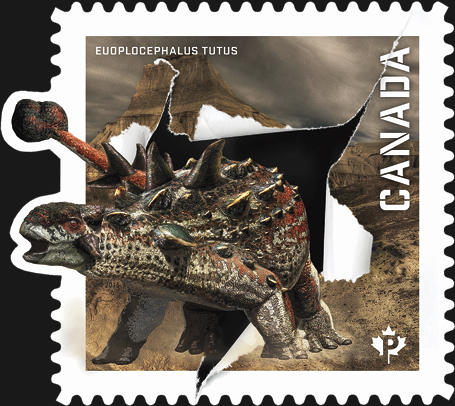 Bellowing and swinging its massive tail like a wrecking ball, armored Euoplocephalus steps forth to defend his territory. Photos from Alberta’s Dinosaur National Park provide apt background for these “thunder lizards.”

As rendered by Julius Csotonyi, a highly regarded Vancouver artist who combines modern science and a lifelong passion for the prehistoric, some Dinos of Canada show nontraditional, but perfectly plausible, attributes. Thus Chasmosaurus (top) displays a 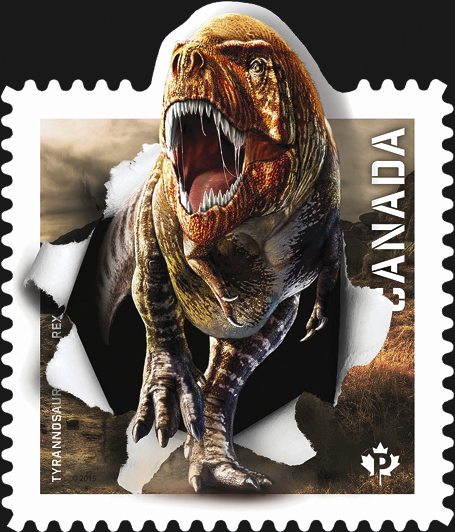 Tyrannosaurus rex appears to have a bone to pick with you as he bursts from this stamp, one of five permanent-rate Dinos of Canada commemoratives to be issued by Canada Post April 13 in booklets of 10 and a souvenir sheet of five.

With full-color, 3D-like images that seem to punch through the paper they’re printed on, brilliant new Dinos of Canada bring to life five prehistoric animals that once roamed Canada in a “surprise” set of stamps to go on sale April 13.

Unveiled by Canada Post April 9 at Toronto’s Royal Ontario Museum, the colorful quintet of “thunder-lizards” range from agile, birdlike Ornithomimus edmontonicus to meat-seeking superstar Tyrannosaurus rex, whose modest crown of feathers fails to distract from the slavering jaws and massive, dagger-like teeth of perhaps the greatest predator that ever lived.

“Canada’s rich geography and spectacular landscape define this country and who we are,” said Minister of Transport Lisa Raitt, whose responsibilities include Canada Post. “We have a special fascination for the creatures that walked this land in the ancient past. With these stamps, we rediscover the magic they hold for us.”

“Canadians young and old marvel at these wonders of nature and will be intrigued to discover in this stamp issue fascinating clues to the lives these dinosaurs lived,” said Canada Post President and CEO Deepak Chopra.

The ancient animals pulse with life on the stamps, through the innovative use of multilevel embossing and holographic on the souvenir sheet versions of most of the stamps.

Stamps from the booklet of 10 have the holography, but not the embossing, which makes them detectably different stamps.

The images of the four terrestrial dinosaurs are pictured tearing their way through barren background images from Dinosaur National Park, northwest of Medicine Hat, Alberta, one of Canada’s richest sources of dinosaur remains.

Dinos of Canada were vividly illustrated by Julius Csotonyi of Vancouver, British Columbia, a highly regarded artist with graduate degrees in biological sciences and a lifelong fascination with dinosaurs.

Informed scientific speculation about previously unappreciated aspects of these creatures, like their ancestral ties to modern birds, patterns of feathers, and bright colors that may have adorned the age-old reptiles as they do modern lizards, are richly represented in Csotonyi‘s portraits.

“It is important to strike an effective balance in pose and color patterns that were gripping and imposing yet scientifically accurate or plausible,” says the award-winning natural history illustrator, whose life-size artwork has been featured at the Royal Ontario Museum.

Canada has proven a rich hunting ground for fossil remains, with discoveries made from the Burgess shale of the Canadian Rockies to Nova Scotia’s Bay of Fundy.

The sharp-toothed stars showcased in this issue were based on finds from western Canada, chosen in consultation with the Canadian Museum of History.

A giant sea-dwelling reptile, Tylosaurus pembinensis could open its vast jaws to swallow large prey whole in the inland sea that divided North America 80 million years ago. Nicknamed “Bruce,” the specimen featured at the Canadian Fossil Discovery Centre in Modern, Manitoba, is the largest mosasaur skeleton on display in the world.

Chasmosaurus belli, a relative of Triceratops with similarly striking headgear, boasted a large frill supported by a bony framework now theorized to have been used not for defense, but for colorful display, possibly in attracting a mate.

Tyrranosaurus rex is the “Tyrant king” of the dinosaurs. In Saskatchewan in 1991, high school science teacher Robert Gebhardt discovered one of the largest and most complete skeletons of its kind, now nicknamed “Scotty.”

Ornithomimus edmontonicus, first discovered in 1933, is now known to have sported long arm feathers. It used speed and agility to outrun predators and hunt down prey, which included small lizards and mammals.

A 2012 article named Ornithomimus edmontonicus one of three ostrichlike creatures that “hint that there may be more feathered dinosaur fossils than anyone ever expected.”

Euoplocephalus tutus, an herb-eater, is equipped with spiky, plated armor and a massive club on its tail to deter carnivorous neighbors. Its complex and unusual nasal passages may have warmed inhaled air, improved its sense of smell, or even helped it to vocalize (as it appears to on the stamp).

Permanent-rate Dinos of Canada stamps, each paying Canada’s domestic letter rate (currently 85¢), will be issued in self-adhesive booklets of 10.

While each stamp has a frame 28.5 millimeters  square, the dinosaur images break these frames in varying configurations.

Designed by Andrew Perro, with illustrations by Csotonyi and photography by Judy Arndt, the stamps were printed in four-color offset-lithography and embossing by Lowe-Martin.

Canada Post also will make available a souvenir sheet including all five stamps. The sheet measures 159mm by 65mm.

The cancel on Canada Post’s first-day day covers pictures Ornithomimus edmontonicus. The cancellation site is Drumheller, Alberta, home of the Royal Tyrrell Museum of Paleontology, one of Canada’s most important dinosaur museums.

Some 15,000 official FDCs of the souvenir sheet only have horizontally se-tenant strips of the five stamps on an envelope with an overall image of the Alberta badlands. Priced at $5.25, these are Canada Post item 403979144.

Not specifically promoted as a collectible, but a must-have for the Dinos of Canada completists is a “Stuck on Stamps! 2015” kit built around the issue, with the stamps, “StampFacts cards” showing the set, each individual design, and information about dinosaurs.

The cover for this kit “For Kids” urges recipients to “collect these genuine Canadian stamps and trade them with your friends,” and as an added incentive notes that there are “Tattoos included.” Priced at $5.95, “Stuck on Stamps! 2015” is Canada Post item 402015502.

The first stamps to depict ancient animals of Canada were a chronological series of four se-tenant four-stamp Prehistoric Life in Canada stamps issued between 1990 and 1994.

The 1990 quartet of 39¢ stamps (Scott 1282a) depicts creatures from the Age of Primitive Life, including Canada’s oldest known inhabitants, fossil algae from the Precambrian Eon, dating back as much as 2 billion years (Scott 1281).

Called Fossils, the 1991 block (Scott 1309a) has 40¢ stamps showing a plant, lobed-fin fish, teeth from an eel-like creature, and the first reptile.

Dinosaurs debuted on Canada’s stamps with the 1993 se-tenant block of 43¢ stamps (Scott 1498a) picturing Massopondylus, Styracosaurus, Albertosaurus and Platecarpus. The series concluded with early extinct mammals on four more 43¢ stamps in 1994 (Scott 1532a), including one of the world’s first group of large browsing mammals, a rhinoceros-like browser related to the horse, a short-faced bear and a wooly mammoth.

Dinosaurs made a surprising return appearance on a 45¢ Scenic Highways stamp in 1998 (Scott 1740) with a T. rexlike  raptor fossil pictured on a stamp promoting Alberta’s famed Dinosaur Trail,” a 29-mile drive that follows the slow-moving Red Deer River near Drumheller.

In 1999, a 46¢ Millennium Collection commemorative to honor Canada’s IMAX Corp. (Scott 1818a) prominently pictures yet another jaws-agape T. rex, reminiscent of the one that gobbled up a corporate attorney in the Spielberg blockbuster Jurassic Park.