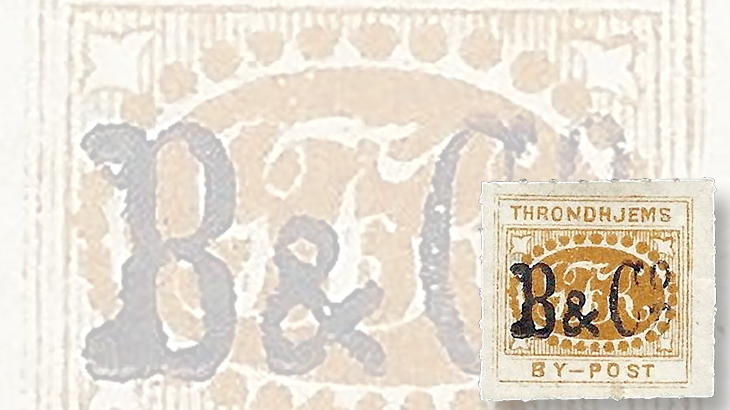 When new owners reopened the local post business, the stamps were overprinted. 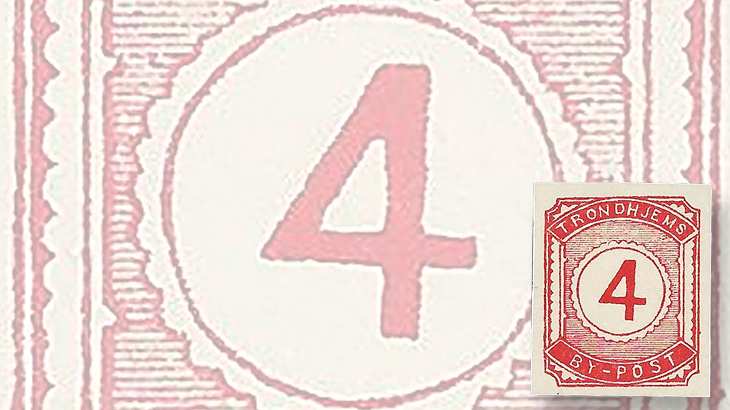 Soon after, a simple numeral design was put into use by the local post. 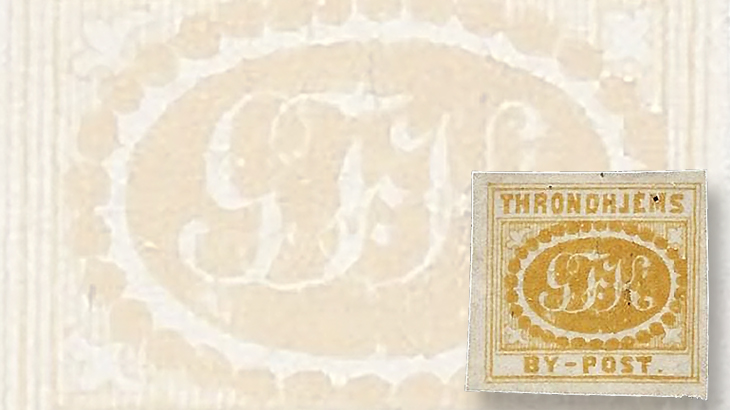 The earliest issues of the Throndhjems By-Post local post in Trondheim, Norway, featured the monogram of founder Georg F. Krogh. 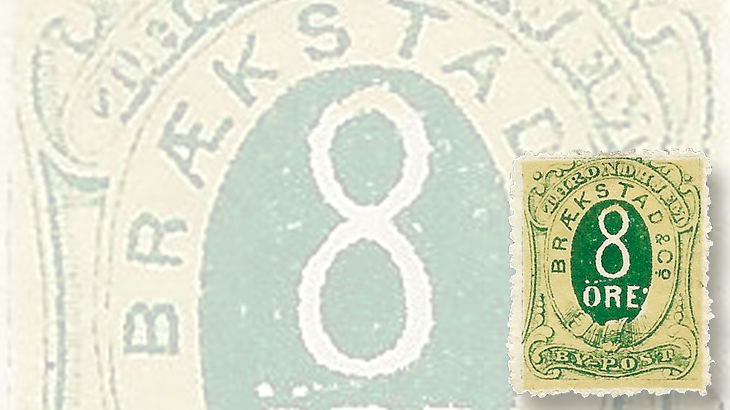 Norway’s currency change brought about new local stamps from the Throndhjems By-Post, including this 8-ore denomination. 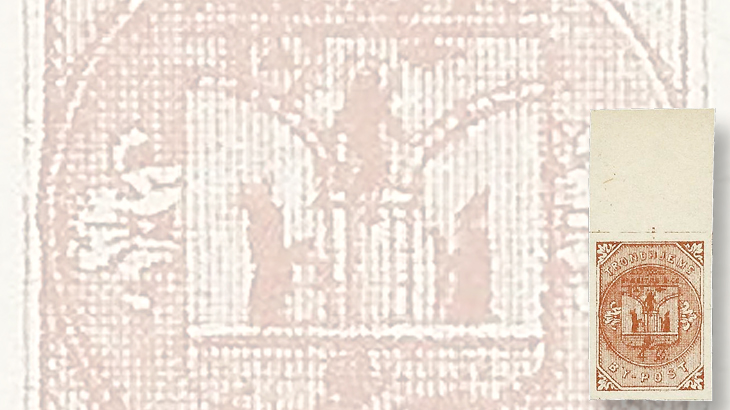 The Trondheim coat of arms is featured on the 1884 4-ore local stamp. 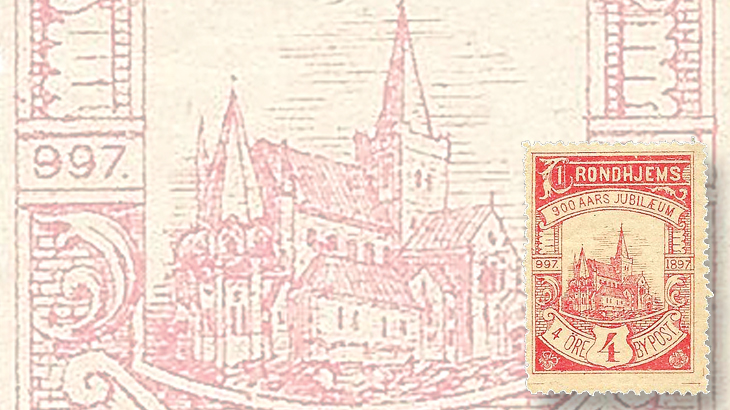 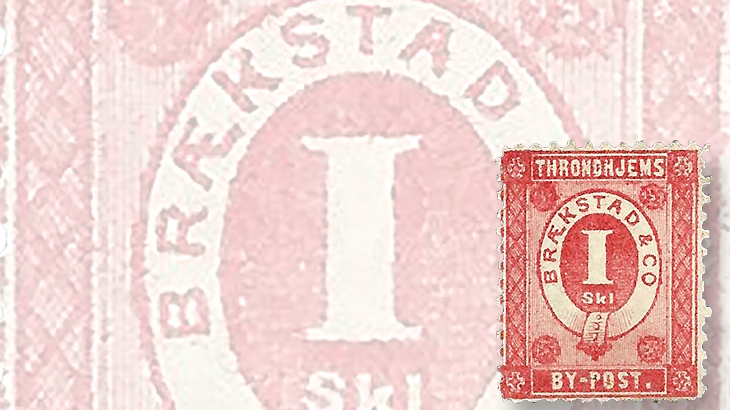 A new design was introduced in 1872, as shown on this 1-skilling issue.
Previous
Next

Trondheim is one of Norway’s largest cities located on its West Coast. It is also one of the oldest cities in the country, having been founded in 997.

Trondheim is home to a famous cathedral. In the 1860s, there were many business projects being developed in the Trondheim area, including mining.

There was, therefore, a need for efficient local communications. Remember that this was long before the telephone made its first appearance.

The local post began operations on Nov. 17, 1865. The local post stamps were on sale at six different stores throughout the city where there were also letter boxes. The local post was never a financial success, and it was closed in 1871.

Krogh released three different nondenominated stamps that sold for 1 skilling each. The main design element was Krogh’s monogram, GFK, in an oval.

Soon after its closure, the local post reopened on Aug. 15, 1871, under new ownership. It was operated by Braekstad & Co., owned by brothers Hans Lien Braekstad and Christian Fredrik Meyer Braekstad (1848-1909), who also had a book shop in the city. Hans soon left for England where he worked as a journalist, and in 1877 Christian became the sole owner of the company.

Christian had numerous business interests. He was also deeply involved in local party politics. Sadly, he committed suicide in 1909, but his widow Marie Braekstad carried on the local post business until her death in 1912.

Braekstad & Co. was discontinued in 1912, but daughter Lulu Braekstad went on running the local post until it was closed for good one year later.

It seems both the general public and the business community were satisfied with the service provided by Braekstad & Co. It also appears that the local post was quite profitable.

In 1888, the Norwegian government ordered a review of local post deliveries in the country. Local communities were asked to comment on the situation. At the time there were 14 private local posts in operation. Some were ordered to close at once, a few others were allowed to continue until the Post Office had established local deliveries in the early 1890s.

The only exception was the Trondhjems By-Post. It is not really known why it was allowed to continue, but it seems everyone was satisfied with this arrangement. However, the Post Office clearly stated that the local post was not allowed to introduce any new types of stamps.

When Braekstad & Co. took over the local post, the stamps were overprinted “B & Co”. A new type of stamp was introduced in 1872 with denominations of ½ skilling, 1s and 2s. Later there were a number of surcharges.

In 1877, Norway changed the currency unit from skilling to ore. This resulted in a number of surcharged stamps with new denominations in ore. In November 1877, new stamps were created in a slightly different design, with 2o, 4o and 8o denominations. They were later printed in a smaller size.

In 1884 a 4o stamp depicted the Trondheim coat of arms. It was then followed in 1888 by a numeral design, which was then in use until the post closed in 1913.

As already stated, no new designs were allowed after 1888. However, this did not prevent Braekstad & Co. from issuing four pictorial stamps marking Trondheim’s 900th anniversary in 1897.

Last year Norwegian collector Knut Glaso published a handbook called Throndhjems By-Post (Mysen 2015), in which he tells the story of the local post and lists all its stamps and postal stationeries. Readers of Linn’s will certainly appreciate that the book is in English.