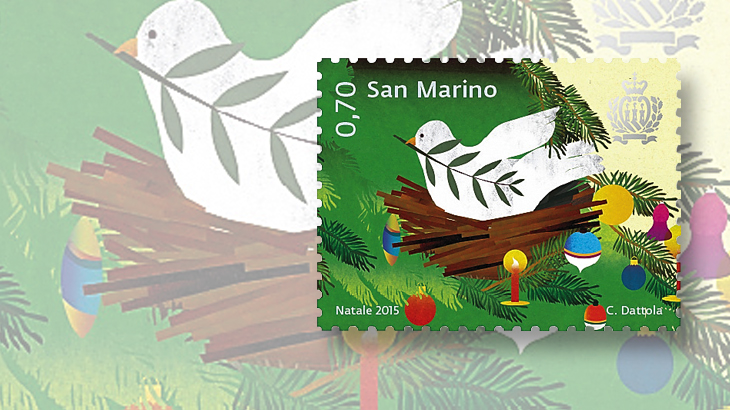 A peace dove in its nest is included among the ornaments on this Christmas tree on a stamp from San Marino. 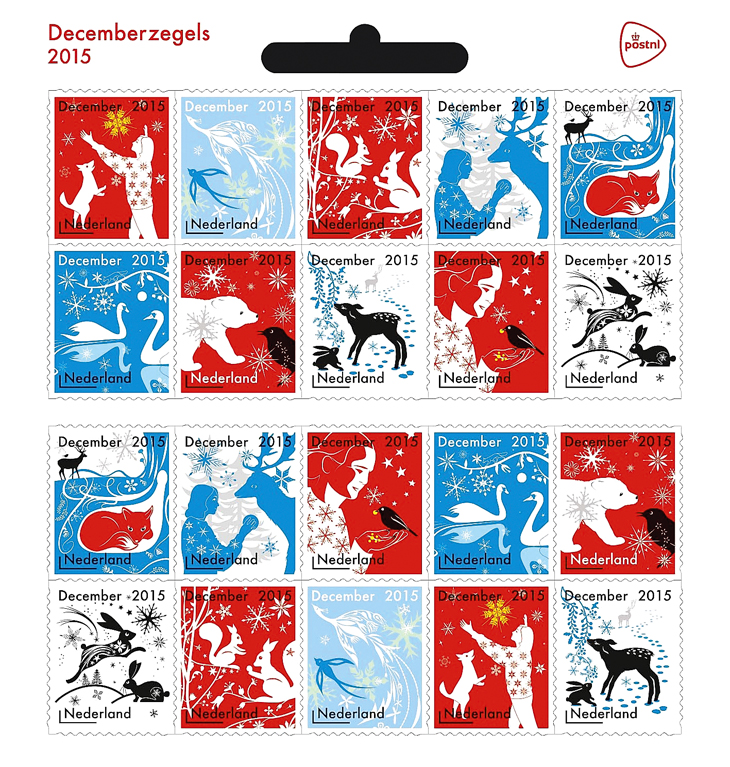 The Netherlands’ December stamps feature a variety of animals in winter scenes. Some of these, such as the reindeer, are traditionally associated with Christmas, while others, such as swans, are not. 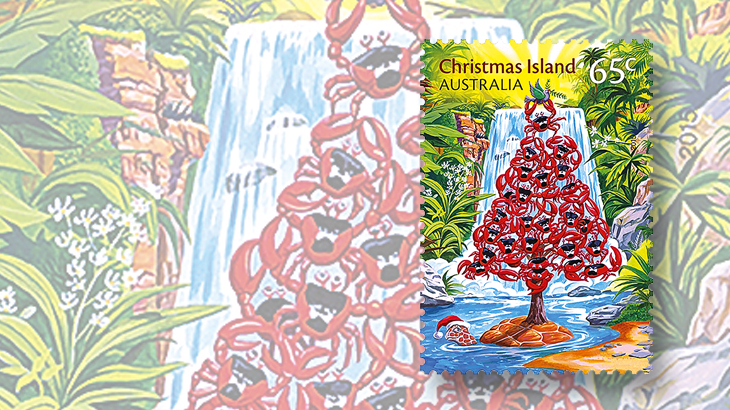 The Christmas tree pictured on this Christmas Island stamp is formed by red crabs, stacked one on top of another, with a green turtle as the base of the tree. 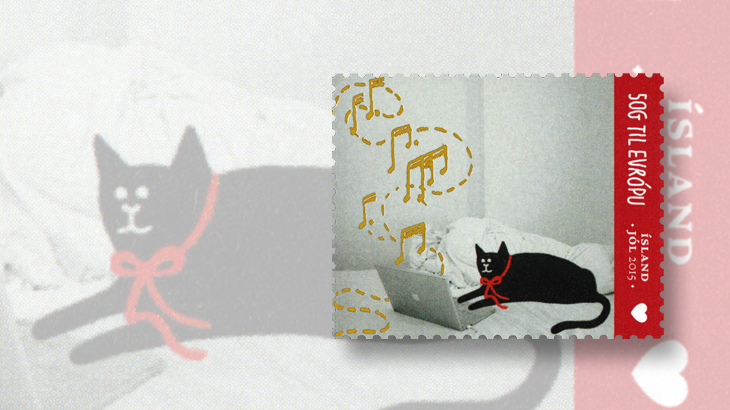 The Christmas Cat from Icelandic folklore is shown relaxing, listening to music on his computer on this Christmas stamp. 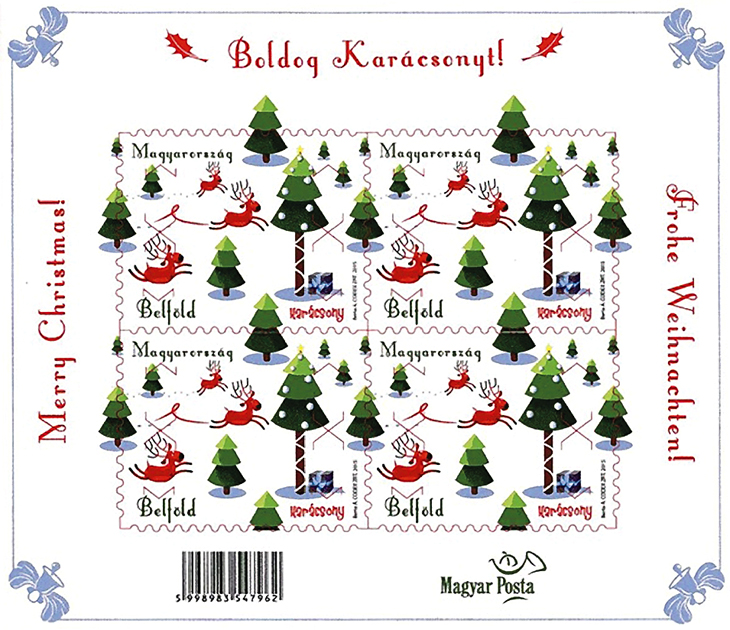 Hungary’s Christmas stamp featuring reindeer frolicking in the snow was issued in a souvenir sheet of four, as well as in sheets of 50. 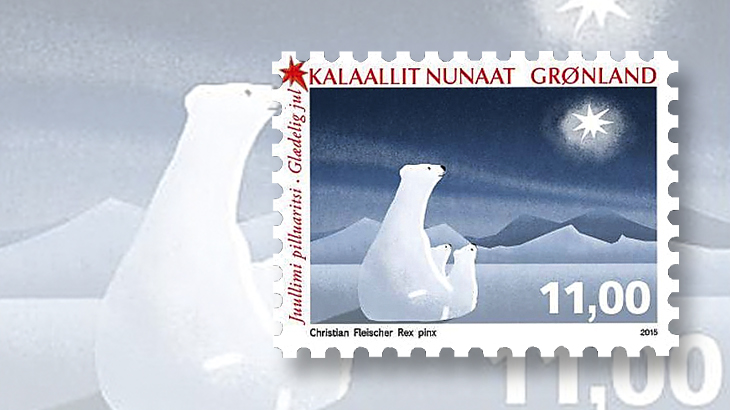 A Christmas stamp from Greenland shows a family of three polar bears. 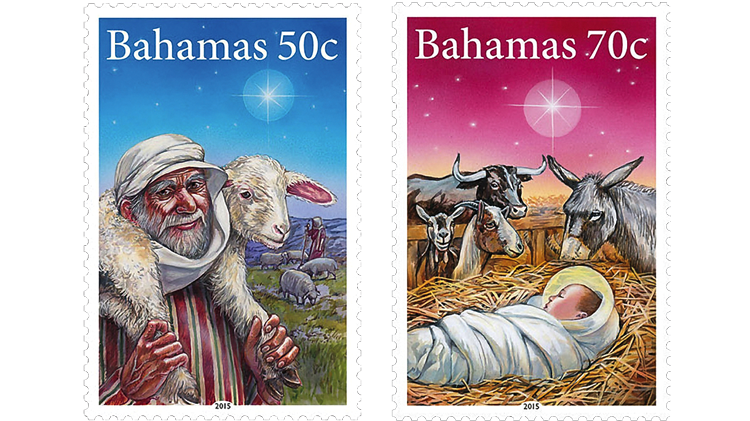 The Bahamas issued four Christmas stamps Nov. 19 illustrating biblical scenes from the Nativity. Two of these, one with the shepherds and the other of Jesus in the manger, include animals. 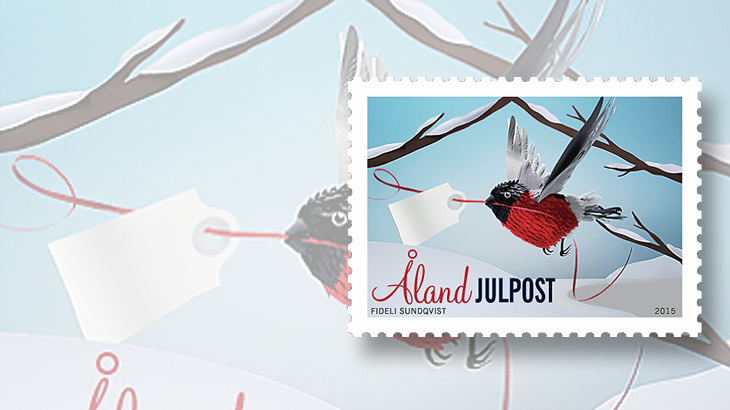 Aland’s Christmas stamps reproduce paper art created by Fideli Sundqvist. The bird shown on the this stamp holds a piece of red ribbon with a gift tag. 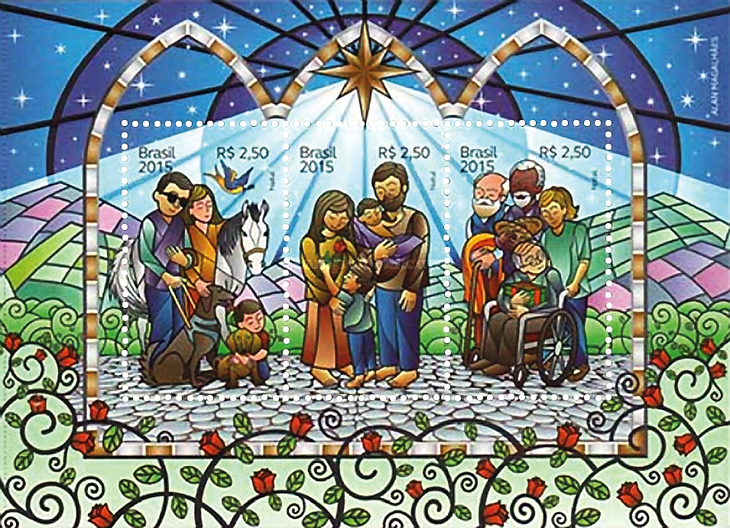 A pet dog, a guide dog, a horse and a bird are pictured on the stamp in the far left of Brazil’s Christmas souvenir sheet.
Previous
Next

Brazil’s Christmas stamps and souvenir sheet issued Oct. 1 reflect the theme of kindness and goodwill to others.

While most of the designs in this issue feature people demonstrating various acts of generosity and support for one another, one stamp focuses on animals as well.

This 2.50-real stamp is on the left in the souvenir sheet. It pictures a visually impaired man with a guide dog, a boy hugging a dog, and a woman embracing a horse. The blue and yellow bird in the upper right represents a peace dove.

In addition to the souvenir sheet, Brazil’s Christmas issue includes two self-adhesive stamps. One shows a child receiving a gift, and the other depicts a grandfather hugging his granddaughter.

Each year, the Netherlands PostNL issues stamps at a reduced rate for use on Christmas mail. PostNL calls them December stamps.

The 2015 December stamps were issued Nov. 24 in panes of 20 with 10 different designs, all of which include animals.

One stamp even shows three animals: a fox at the bottom of the design and a deer with a bird on its back in the upper left.

Depicted on the other December stamps are a dog, a polar bear, rabbits, squirrels, swans and other birds.

The stamp designer Tord Boontje said of his illustrations: “I intentionally opted for a few animals which aren’t usually associated with December. Swans, for example, because when I see water fowl, I always think of the Netherlands. You can often see swans when travelling by train, and I think they’re exquisite!

“I also wanted to use a bird that only exists in fairy tales: a phoenix. And a swallow, which you won’t see here in December, as they spend their winters in Africa. It’s all make-believe, of course, but this also makes the stamp refer to those who can’t be here during the holidays.

“As a counterbalance, I used familiar December elements such as deer, hares, squirrels, and Christmas trees. It’s precisely that combination that I like — and it matches my style: bright, elegant, and narrative.”

Like Boontje, other designers portrayed birds in their Christmas stamp designs.

A caged bird is pictured on a Winter’s Greetings stamp from Japan, and a duck and an owl join other animals around the manger on a souvenir sheet from Australia.

Also, two stamps issued Oct. 30 by Australia feature symbolic peace doves, as does one of the three Christmas stamps from San Marino.

On the 0.70 stamp issued Oct. 23 by San Marino, the dove has an olive branch in its beak and is sitting on its nest among other ornaments on a Christmas tree.

A 93-penny stamp from the Isle of Man shows a dove in flight. This stamp is part of a set of 10 celebrating Christmas and commemorating the 250th anniversary of the first prayer book published in Manx Gaelic.

The red-breasted robin featured on one of the two Christmas stamps issued October 9 by Aland is a three-dimensional paper creation by Swedish artist Fideli Sundqvist.

This stamp is inscribed “Julpost” and pays a special reduced rate for Christmas mail.

Creatures of the sea are pictured on at least three 2015 Christmas stamps.

Australia Post described the design of the 65¢ domestic-rate Christmas Island stamp: “Red crabs (Gecarcoidea natalis) are a familiar sight on Christmas Island, and they make a strong appearance in this Christmas stamp issue.

“Like dexterous circus performers mimicking a human pyramid, they stack themselves into a Christmas tree in the island’s forested interior.

“Atop the crab-tree an emerald dove (Chalcophaps indica natalis) is poised, with a string of tinsel in its beak.”

Also, the base of the tree is formed by a green turtle wearing a red Santa hat.

The turtle has been transformed into a snowman on the $1.80 international-rate stamp. Red crabs and a frigatebird complete the design.

These stamps inscribed “Christmas Island” are valid in Australia as well as on this island in the Indian Ocean.

In contrast to the beach scenes of Christmas Island are the snow-covered landscapes and cold-weather animals found on other Christmas stamps.

For example, a Christmas stamp from Hungary depicts three reindeer leaping through the snow.

Hungary’s Magyar Posta issued this stamp Nov. 10 in sheets of 50 and in a souvenir sheet of four.

The inscription “Belfold” on this nondenominated stamp indicates that it pays the rate for nonpriorty, domestic letters.

A cartoon image of a reindeer head is shown on a stamp issued Nov. 27 by Austria.

Two question marks appear on this stamp, one above the reindeer and the other after the words “Why Nachten?”

According to Austria Post, the designers Petra Radel and Anita Kern provided different interpretations for the phrase. They said it can be taken literally as asking the question “Why Christmas?” or, if read aloud, it sounds like “Weihnachten,” the German word for Christmas.

Belgium’s two Christmas stamps show round Christmas decorations, one red and one green, but a closer look at the designs reveals numerous items that traditionally symbolize Christmas, including reindeer.

For more reindeer, a large symbolic reindeer is featured on the 70-penny denomination in Gibraltar’s set of five Christmas stamps issued Nov. 2, and the other Christmas stamp from Aland depicts reindeer flying through the night sky with Santa’s sleigh.

In its Dec. 11 Winter Greetings set of 20, Japan includes reindeer on one stamp, and a polar bear on another.

A Greenland Christmas stamp designed by Christian Fleischer Rex shows a mother polar bear with two cubs gazing intently at a bright star. This stamp bears an 11-krone denomination. The 12.50kr stamp features a similar design with a human family replacing the bears. Both stamps were issued Oct. 19.

Rex explained that his designs represent the time spent at Christmas “having fun with those closest to you” and that “the cold of winter is cancelled out by heart-felt warmth and caring for each other.”

A polar bear, beaver and moose, all wearing hats, are featured on three stamps issued Nov. 2 by Canada. The stamps were pictured on the front page of the Nov. 2 issue of Linn’s.

While dogs are found on a handful of the 2015 Christmas stamps, including Snoopy on three of the United States Postal Service’ s A Charlie Brown Christmas issue of Oct. 1 and the aforementioned stamps from Brazil and the Netherlands, only one cat is featured. This is Iceland’s Yule or Christmas cat.

In Icelandic folklore, this cat has been described as a fiend that eats those who do not receive new clothes for Christmas.

Over the years, the cat has mellowed and is shown calmly listening to music on a laptop computer on a nondenominated Christmas stamp issued Nov. 5. The design includes musical notes in gold foil.

Many Christmas stamps feature the Nativity and other scenes from the biblical account of the birth of Jesus. Animals found on these stamps include camels, donkeys, sheep and oxen.

Several of these stamps reproduce classic paintings, such as The Madonna of the Rabbit by Titian on a stamp from Tanzania.

Other postal administrations asked designers to creature new Nativity pictures for their stamps. Among these was the Bahamas, which issued four stamps Nov. 19 featuring illustrations by Robin Cartor.

Two designs show animals. Shepherds are tending their flock on the 50¢ denomination, and an ox, donkey and goats watch over baby Jesus in a manger on the 70¢ stamp.

The stamps from Faroe Islands are the third and last issue in a series dedicated to the Christmas gospel. One design depicts the magi, or the three wise men, on camels, and the other shows Mary on a donkey during the flight into Egypt.