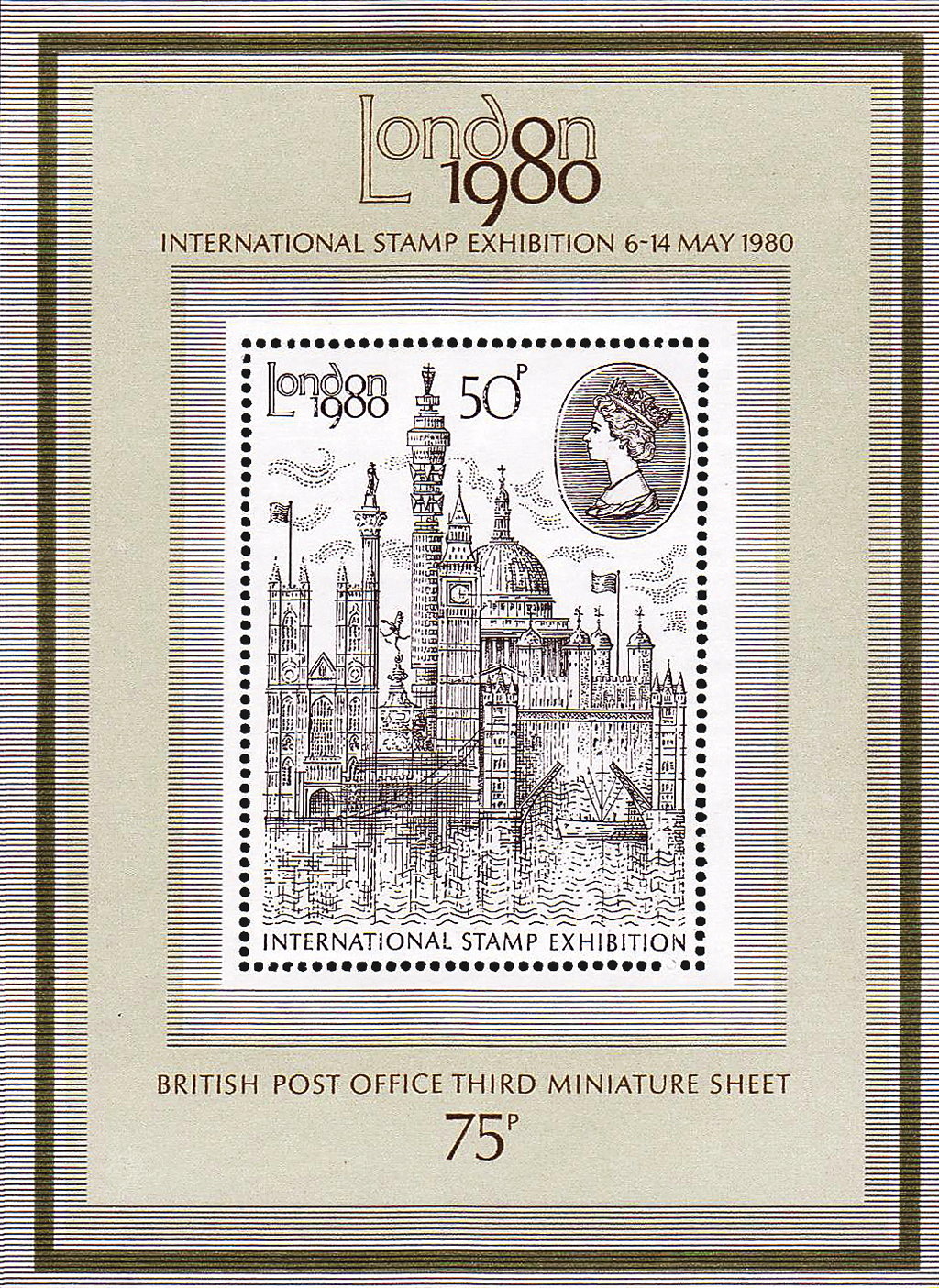 This souvenir sheet was sold in April 1980 with the additional 25p beyond the 50p postal charge going to support London 1980, an international stamp exhibition held that May. 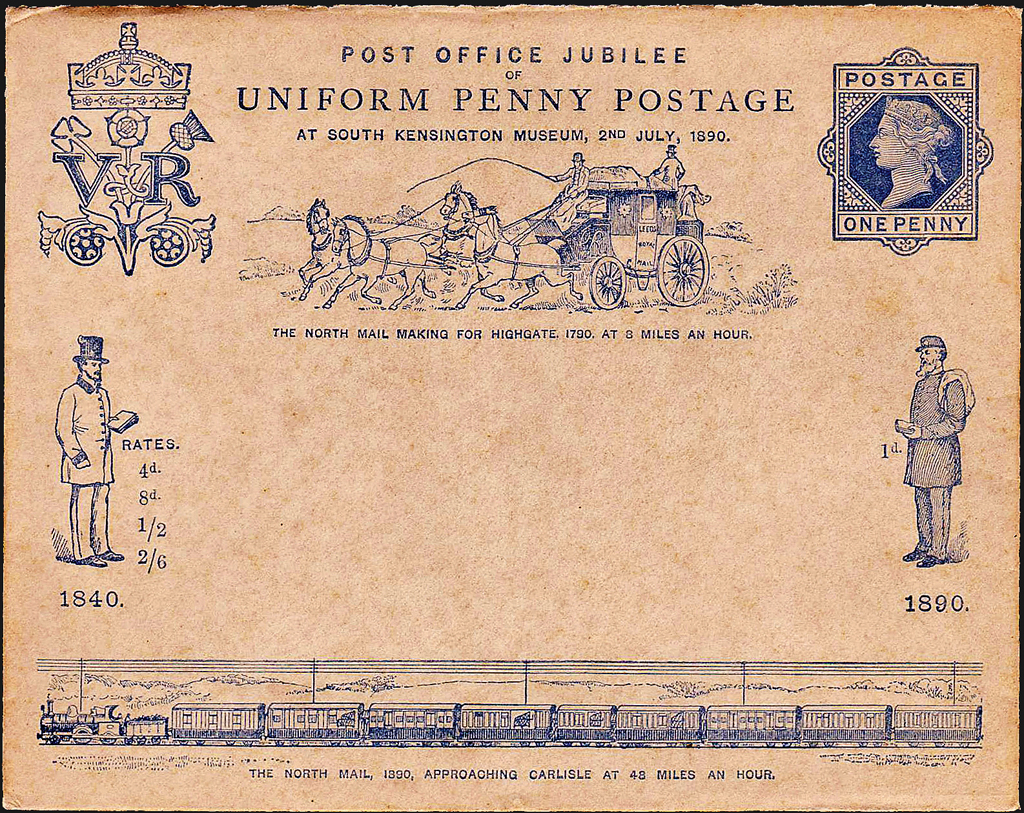 An early effort in 1890 by the post office to collect additional revenue beyond postage for a charitable cause was this postal stationery envelope commemorating the 50th anniversary of postal reform. The envelope sold for 1 shilling, with 11 pence goin 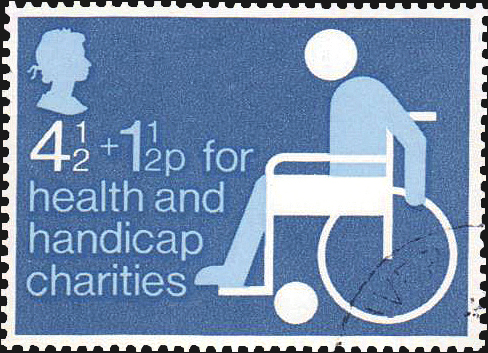 Great Britain issued its first of five semipostal stamps in 1975. The additional 1½ penny above the first-class postage rate of 4½p was given to various charities in the United Kingdom.

Semipostal stamps are sold at a price greater than postal value, with the surcharge being dedicated to a special purpose, often a charity. They differ from postal tax stamps in that their use is voluntary.

The first Great Britain semipostal stamp, the 4½-penny+1½p Handicapped Person stamp (Scott B1), was issued in 1975.

The postal duty was 4½p, the inland first class letter rate at the time. Purchasers paid an additional 1½p when they bought the stamp, which was a donation to “health and handicap charities.” The funds were administered by the Trustees of the Charity Stamp Fund, set up to distribute to charities the net income resulting from the sale of the stamps.

This first semipostal stamp was considered by the British postal authorities to be an experiment. It is an experiment that has been repeated only once by Great Britain.

Germany and Belgium, for example, have each issued close to a thousand semipostal stamps. The Netherlands has issued more than 700.

Great Britain’s second and last semipostal issue was the 1989 Christmas set of four (Scott B2-B5). One stamp in this set was not a semipostal (1294).

Christmas is a time for giving, and Royal Mail offered the public an opportunity to give a few pennies to charities by using semipostal stamps to mail their holiday greeting cards.

That year was also the 800th anniversary of Ely Cathedral. The cathedral is located in Cambridgeshire, 240 miles north of London.

The stamps’ designs were created by David Gentleman, a graphic artist who has created many stamp designs for Britain over the years.

For the designs of this issue, Gentleman isolated some of the characteristic architectural features of the early Romanesque style, including doorway arches, pilasters and niches rendered in silhouette.

The inks used to illustrate the architectural devices were metallic silver and metallic gold, which had to be specially produced for the printing of the stamps. These lustrous colors make the stamps a feast for the eye, as is the cathedral building with its very ornate architecture.

In the October 1989 British Postal Bulletin, the post office said: “When customers buy these stamps every extra penny raised will be donated by The Post Office to UK charities. The Post Office will be working in cooperation with the Charities Aid Foundation, who will distribute the money to selected charities.”

An earlier semipostal effort by the post office to support charities occurred in 1890 and is little known among collectors. It commemorated the 50th anniversary of uniform penny postage reforms and of the advent of the world’s first adhesive postage stamp, the Penny Black (Scott 1).

To celebrate cheap postage for all, which advanced civilization and promoted business and commerce, the General Post Office held two exhibitions in London. One of the exhibitions was held at the South Kensington Museum.

The envelope contained a correspondence card on which a person could write a message, put the card in the prepaid envelope and mail it.

The benevolent fund was a charity devoted to helping postmen and their families who were in distress because of ill health and those who required support in their retirement.

Since that time, the post office has occasionally collected revenue in excess of postage, dedicating the surcharge to assist worthy causes. For example, every 10 years there is a major stamp exhibition held in London.

In 1980, the 50p London View souvenir sheet (Scott 909a) was issued by Royal Mail and sold for 75p, with the additional 25p above face value going toward sponsorship of London 1980 International Stamp Exhibition.

The post office did the same twice more for the 1980 stamp show with two souvenir sheets: British Architecture (Scott 834a) and Rowland Hill (874a). It did so again in 1990 when it issued the Industrial Archaeology souvenir sheet of four (Scott 1284).