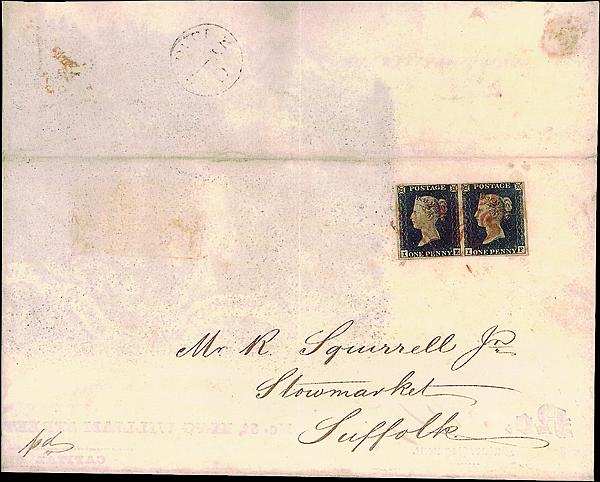 The May 6, 1840, “Protestant Dissenters” first-day cover of the Penny Black, the world’s first postage stamp. It is just one of many gems featured in The World’s First Postage Stamp by Alan Holyoake.

Alan Holyoake was bitten by the stamp-collecting bug in 2001 — when he was high above the ground, during a flight to Geneva.

As he rested comfortably in his seat, he perused a newspaper that carried a story about an upcoming auction of items from the Royal Philatelic Collection.

Right then, he decided he would bid in the auction — aggressively.

Thus began an odyssey that carried Holyoake to the top in the rarified world of philatelic exhibiting.

This fascinating account of the genesis of a philatelist and his passion is detailed in Holyoake’s paean to his grand prix-winning exhibit of the first line-engraved postage stamps of Great Britain: The World’s First Postage Stamp.

In this handsome oversize volume, Holyoake takes you through his exhibit, “The Development, Introduction and Usage of the First Adhesive Postage Stamps,” that won the top prize at the London 2010 stamp exhibition.

Holyoake introduces each of the eight 16-page frames of material. There follows each frame, page by page, exactly as laid out for display at London 2010.

As such, the book represents an invaluable reference work for a significant exhibit at a precise point in its development.

For this reason alone, collectors interested in the iconic Penny Black of 1840 should acquire this book.

There is so much incredible material in the exhibit that you want to linger over each page, savoring what Holyoake accomplished after almost a decade of disciplined effort.

Frame four details the May 6, 1840, official first day of the Penny Black.

A single Penny Black first-day cover would be the highlight of any exhibit focusing on the world’s first postage stamp.

After drinking in this tour de force display, it seems ironic that Holyoake considers himself less than a standout ambassador for stamp collecting.
Holyoake makes plain in his introduction that the book “is intended to provide a record of my collection, which I trust many existing philatelists will enjoy.”

This goal is admirably met. However, what piqued my interest was his other impetus for chronicling his exhibit: “ ... to encourage others to collect, ... and find, as I have, the great enjoyment of collecting.”

In a most self-revealing confession, also in the introduction, Holyoake admits that his “big regret is that I have failed, so far, to attract others into collecting.”
Philatelists — those collectors who go well beyond filling holes on album pages — will be captivated by Holyoake’s book.

But it’s not likely that this tribute to a marvelous exhibit will entice those outside the hobby or just getting started down the collecting path.

I’d wager that a neophyte collector would find the book overwhelming.

That’s a shame. Nonetheless, Holyoake has enriched the world of philatelic literature with this book.

Copies of The World’s First Postage Stamp are available for $40 postpaid to any United States address from the Collectors Club, 22 E. 35th St., New York, NY 10016; or via email to collectorsclub@verizon.net.