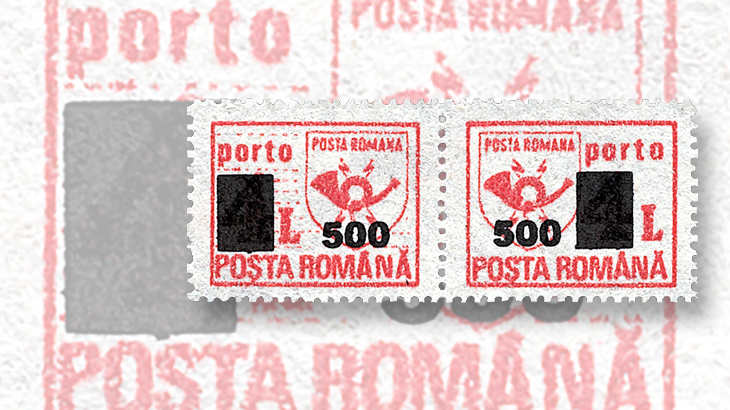 Romania surcharged some 1992 postage due stamps in 2001 with a great leap in denomination: from the original 4 lei to 500 lei. 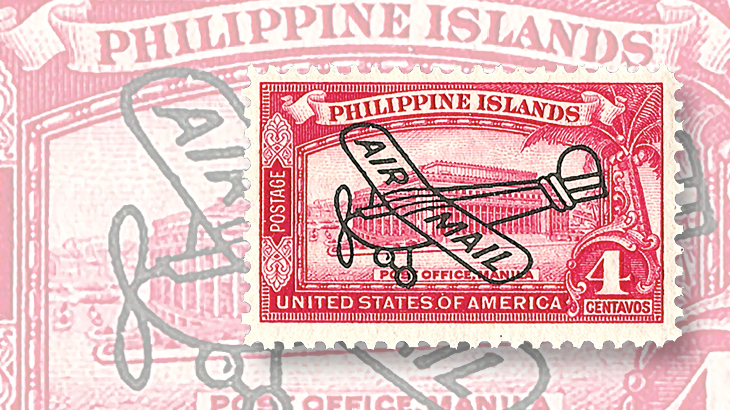 In 1933, the Philippines produced an airmail stamp the easy way, simply by adding an overprint of an airplane to a postage stamp from 1932. 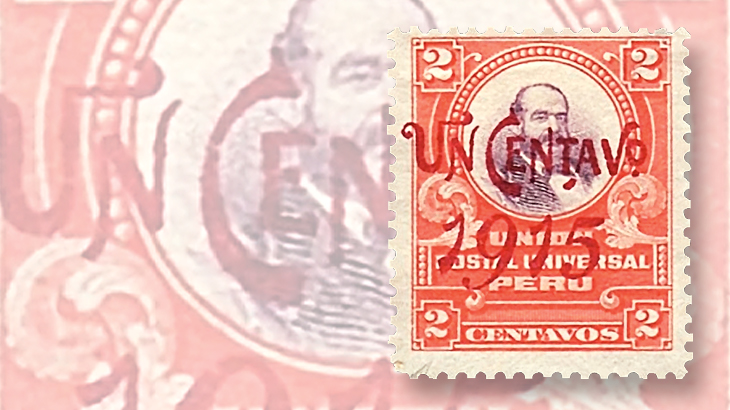 A 1907 stamp of Peru was surcharged in 1915 to create a new issue of a lower denomination: the former 2-centavo stamp is now 1c. 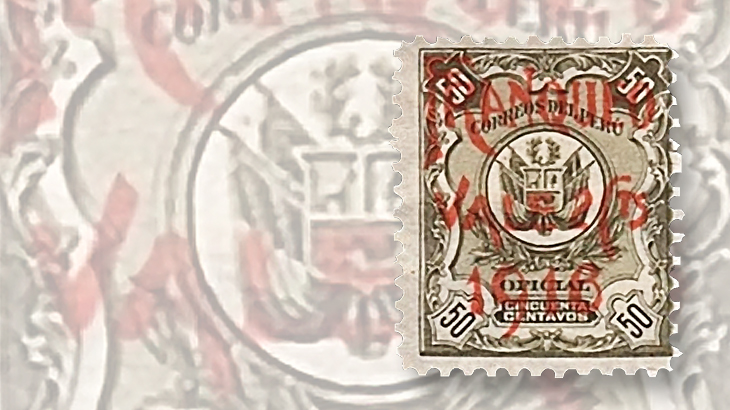 Peru used overprinting in 1916 to make some Official stamps into postage stamps, adding the word “franqueo” (postage) and a surcharged denomination of 2 centavos. 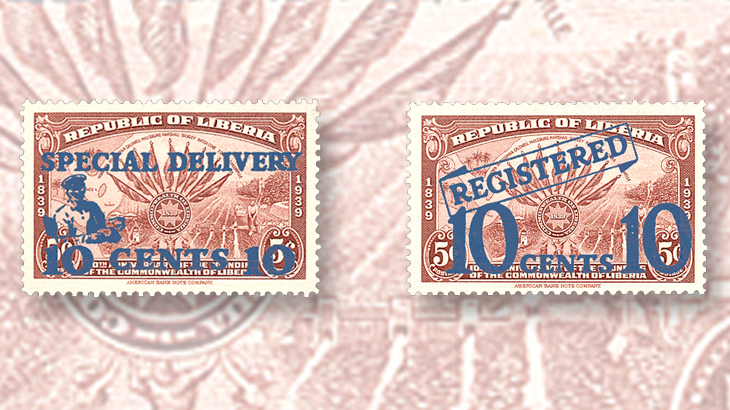 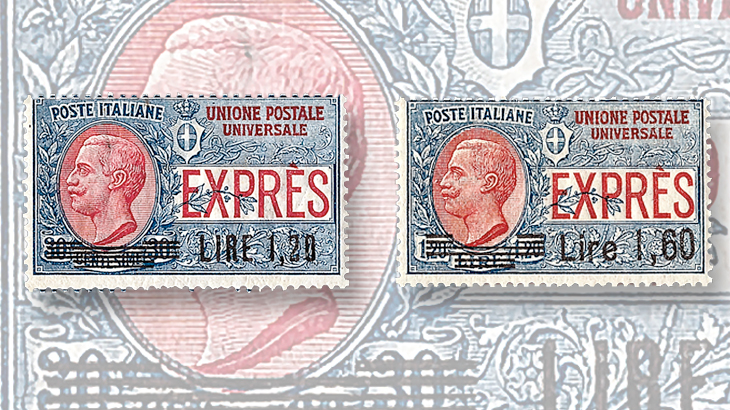 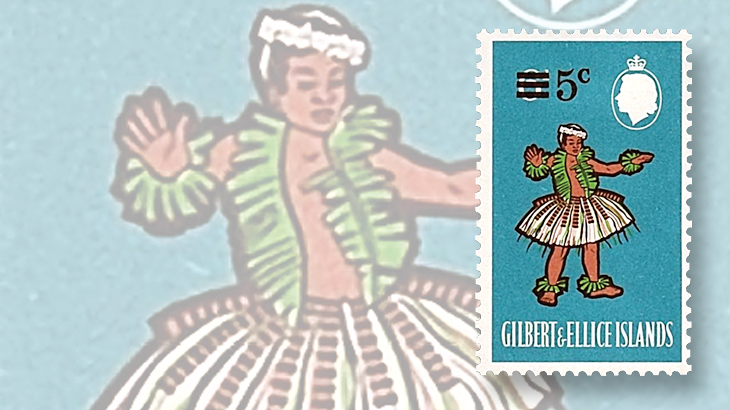 The change from pounds sterling to decimal currency in the British Commonwealth prompted this 1966 surcharge on a 1965 Gilbert and Ellice Islands stamp, changing the denomination from 6 pence to 5¢. 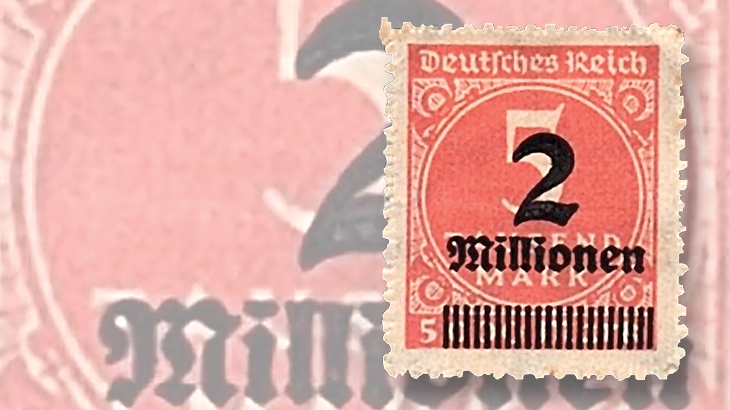 Germany’s hyperinflation period in 1923 generated some astonishing postal items, such as this 2-million mark surcharge on a 5,000-mark stamp. The overprinted stamp paid the domestic letter rate for 11 days in October 1923. 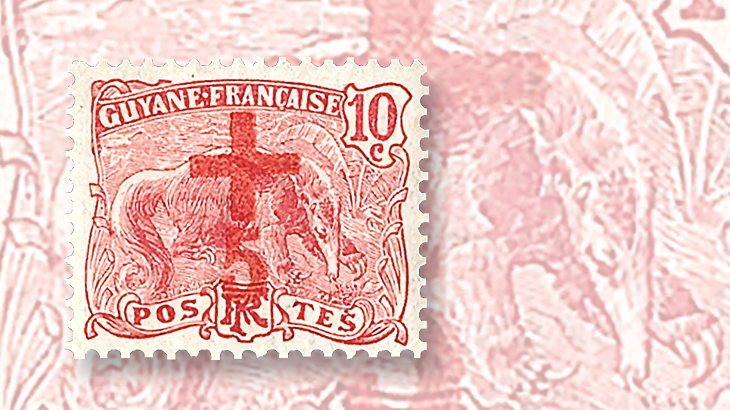 French Guinea transformed 10-centime regular-issue stamps into semipostal stamps to benefit the Red Cross in 1915 by adding a red cross symbol and a 5c surcharge for the charity.
Previous
Next

Simply defined, a stamp with an overprint is one that has any printing added over the original completed design of the stamp.

This added printing could include a surcharge (an overprinted marking that changes or restates the stamp’s denomination) as well as other images or words. The printing might commemorate a person or event, or change the purpose of a stamp.

The first illustration shows an overprinted airmail stamp from the Philippines, produced in 1933 (Scott C47). The underlying 4-centavo stamp (Scott 354) was issued in 1932 and has a vignette (central design) of the Manila post office.

The extra printing on this stamp signaled a change in purpose for the stamp by adding a pretty little airplane that has “Air Mail” written across the wings, transforming a standard postage stamp into an airmail issue of the same denomination.

A surcharged stamp also has additional printing — an overprint — applied to the face of the stamp, but as mentioned earlier, surcharging changes the denomination of the stamp.

Illustrated nearby is a surcharged stamp issued by Peru in 1915.

The deep red surcharge was made with a flashy art nouveau font that changes the denomination of the stamp from 2 centavos to 1c.

In 1916, Peru added additional printing to some Official stamps. The stamp illustrated here has the words “Franqueo” and “Vale 2 Cts / 1916.”

So, this stamp’s overprinting included both a surcharge (denomination 2c) plus wording (“franqueo” is Spanish for postage) that changed the original Official stamp (Scott O30) into a regular postage stamp (Scott 207).

Surcharges generally occur when there has been a rate change requiring different denominations than are available on the current stamp issues.

One solution to this immediate problem is for the postal administration to print a surcharge on excess stamps on hand that have denominations that do not match the new postal rates.

Another opportunity for surcharges is when nations change their currency, as happened within the British Commonwealth in the 1960s and 1970s when the pound sterling was converted to decimal currency.

The currency change is demonstrated on the Gilbert and Ellice Islands stamp whose denomination was altered in 1966 with a surcharge from 6 pence to 5¢ (Scott 114).

Other stamps that are not used for ordinary postage may have surcharges as well.

The postage due stamps were issued in pairs so that, upon delivery, one stamp would be attached to the letter or parcel and the other would remain with the mail carrier to record the postage due.

Many other worldwide postage due stamps have been surcharged, and tracking them down can be both fascinating and challenging.

These two examples are shown nearby.

Liberia’s first special delivery stamp, illustrated here, was an overprinted postage stamp with an added surcharge. In 1941, the overprint and surcharge were added to the 5¢ Seal of Liberia stamp that was issued in 1940 (Scott 278).

The overprint is an image of a mail carrier with the words “Special Delivery,” and the surcharge appears at the bottom of the stamp, “10 Cents 10” (Scott E1).

The same Seal of Liberia ordinary stamp also was transformed into a registration stamp in 1941. This, too, was accomplished by both an overprinted image — a banner containing the word “Registered” — and a surcharge, “10 Cents 10” (Scott F35). This stamp is shown to the right of the special delivery stamp.

Some nations have used a simple surcharge to convert a postage stamp into a semipostal issue to raise money for charity.

An example, pictured nearby, is the 1915 surcharged semipostal issued by French Guinea (Scott B1). The red cross symbol is a suggestion that the extra 5-centime surcharge would be directed to the Red Cross, while the base stamp, a 10c regular issue depicting an anteater, would cover the postage fee for carrying the letter.

This was an inexpensive way to create a semipostal stamp, compared with other nations that produce specific designs for various charity stamps.

Arguably some of the most eye-popping surcharges appear on Germany’s 1923 hyperinflation-period stamps. In January 1923, it cost 20 marks to mail a letter within Germany.

Hungary’s hyperinflation of 1945 also has stamps with ever-increasing surcharges that tracked that nation’s economic disaster.

If you don’t collect stamps with surcharges and overprints, you are missing some interesting issues with amazing stories to go along with them.