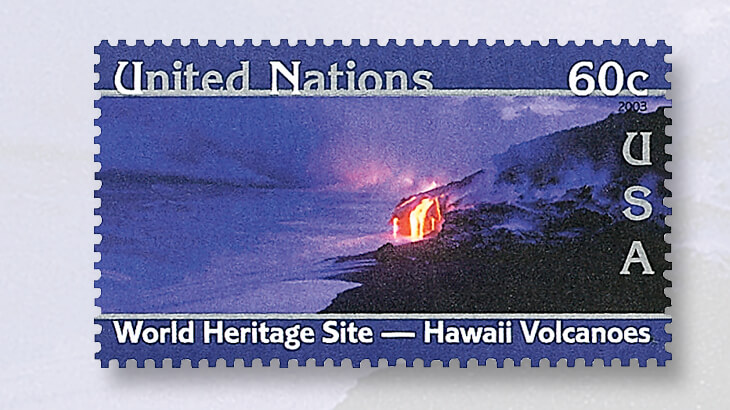 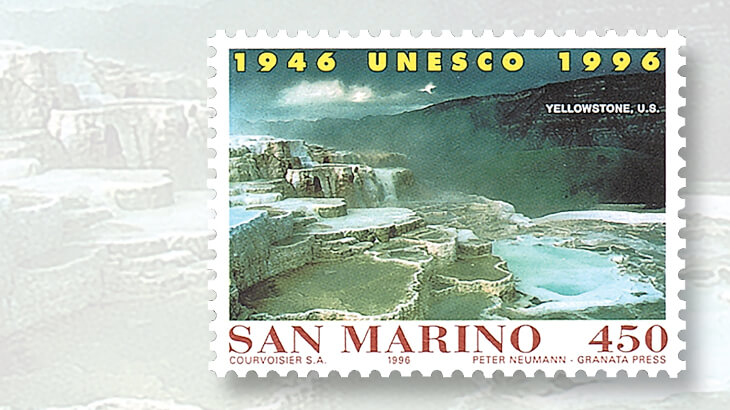 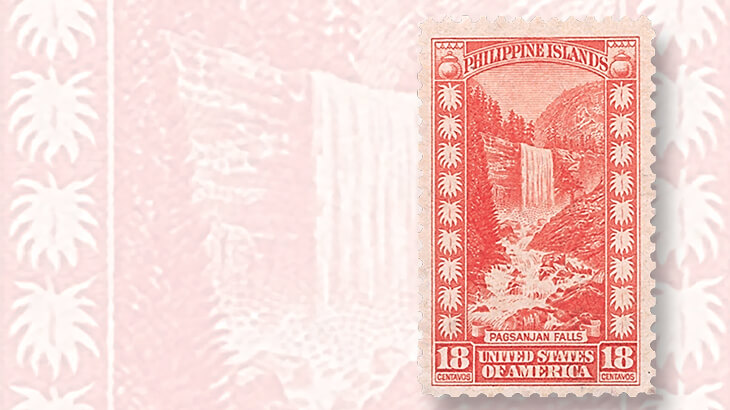 A Philippines stamp issued in 1932 mistakenly shows Vernal Falls in Yosemite National Park, instead of Pagsanjan Falls in Luzon. 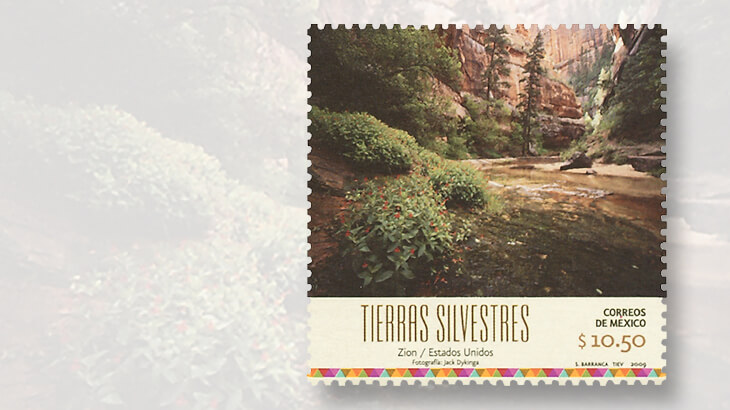 A 10.50-peso stamp from Mexico reproduces a photograph taken at Zion National Park. 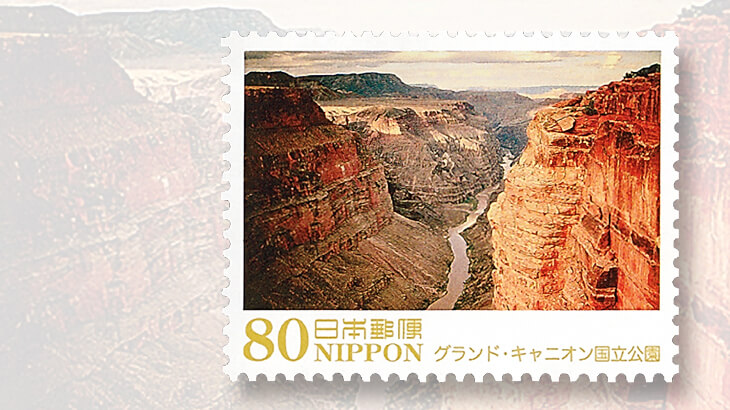 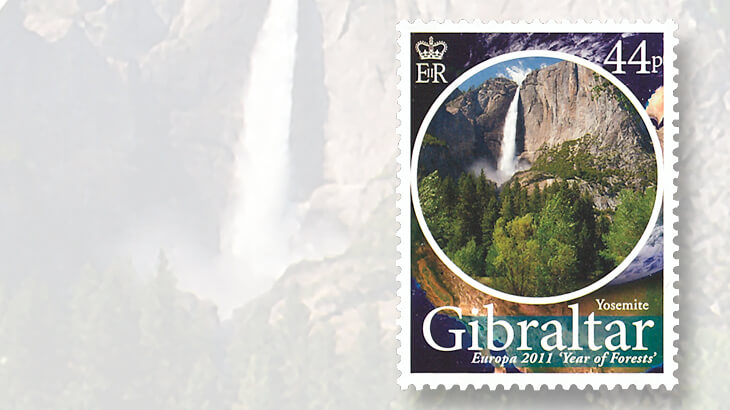 Gibraltar selected Yosemite National Park as one of the sites included on its 2011 International Year of the Forests stamp issue. 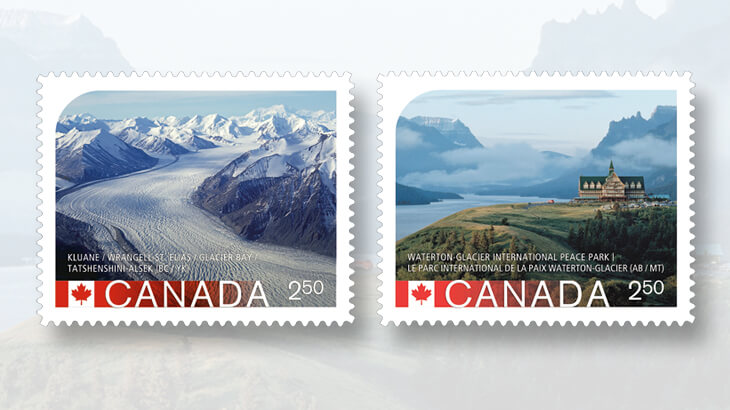 Three national parks in the United States are referenced on two of Canada’s UNESCO Heritage Sites stamps issued July 3, 2015: Wrangell-St. Elias and Glacier Bay in Alaska on one stamp, and Glacier National Park in Montana, part of the Waterton-Glacier International Peace Park, on the other. 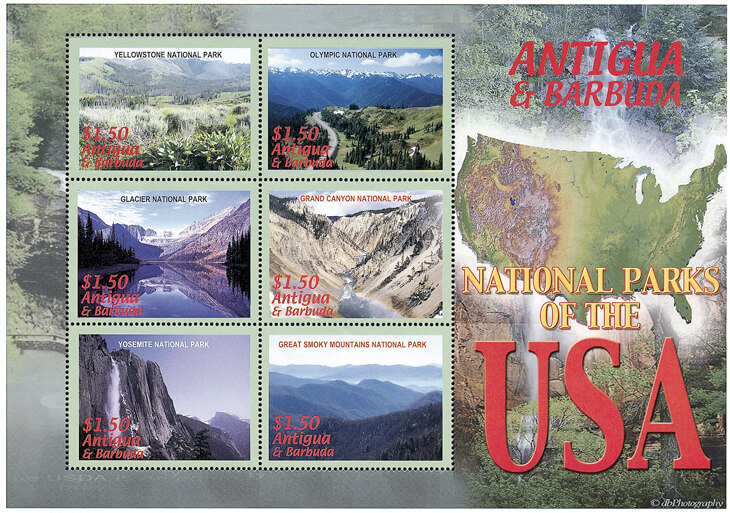 Antigua and Barbuda stamps celebrate the beauty of the “National Parks of the USA.”
Previous
Next

Alphabetically from Acadia to Zion and chronologically from the 1934 National Parks series to the set of 16 commemoratives to be issued June 2 at World Stamp Show-NY 2016, United States national parks have been showcased on postage stamps and postal stationery issued by the United States Postal Service and its predecessor the Post Office Department.

The new set of 16 honors the 100th anniversary of the National Park Service.

One of these UNESCO sites encompasses two U.S. national parks, Wrangell-St. Elias and Glacier Bay in Alaska, as well as Canada’s Kluane National Park and Reserve and Tatshenshini-Alsek Park.

The UNESCO inscription reads, “The Kluane/Wrangell-St. Elias/Glacier Bay/Tatshenshini-Alsek national parks and protected areas along the boundary of Canada and the United States of America are the largest non-polar icefield in the world and contain examples of some of the world’s longest and most spectacular glaciers. Characterized by high mountains, icefields and glaciers, the property transitions from northern interior to coastal biogeoclimatic zones, resulting in high biodiversity with plant and animal communities ranging from marine, coastal forest, montane, sub-alpine and alpine tundra, all in various successional stages.”

With 13.2 million acres, Wrangell-St. Elias is the largest national park in the United States. The National Park Service describes it as the same size as Yellowstone, Yosemite, and Switzerland combined. It was established as a national park on Dec. 2, 1980, the same day as Glacier Bay National Park.

The Kluane/Wrangell-St. Elias/Glacier Bay/Tatshenshini-Alsek stamp is denominated $2.50 to pay the international rate from Canada. Another $2.50 stamp honors the Waterton-Glacier International Peace Park. The world’s first international peace park, it was created in 1932 by combining Glacier National Park in Montana and Waterton Lakes National Park in Alberta, Canada.

Glacier was named a national park in 1910, six years before the National Park Service was established, but it has been a popular area much longer. The National Geographic Guide to the National Parks of the United States, sixth edition, published in 2009, says, “Sheltered valleys and bountiful food have lured people here for nearly 10,000 years. Ancient cultures tracked bison across the plains, fished the lakes, and traversed the mountain passes.“

Another national park in Alaska is represented on a stamp in Canada’s International Year of Mountains souvenir sheet issued Oct. 2, 2002. The circular sheet contains eight self-adhesive stamps featuring summits located around the world, including North America’s highest mountain, Denali in Denali National Park. On the stamp, it is called Mount McKinley. It was officially renamed Denali in 2015.

In announcing the stamp, Canada Post said of the mountain: “At a height of 6,194 metres [20,320 feet], Mount McKinley is North America’s highest summit. It lies in the heart of the Alaska Range, and is flanked by five massive glaciers and numerous ice cascades. Mount McKinley towers above the horizon and is famous for its ever-changing and unpredictable weather conditions.”

Zion National Park located in southwestern Utah is pictured on a stamp issued by Mexico Nov. 6, 2009, the opening day of the Wild Foundation’s World Wilderness Conference in Merida, Mexico. The 10.50-peso stamp (Scott 2644c) shows a photograph of Zion taken by Jack Dykinga, a Pultizer prize winner and a professional nature photographer since the 1970s.

The stamp is in a se-tenant strip of six. The other stamps in this strip feature El Carmen Mountains in Mexico, Nahanni National Park in Canada, Kronotsky Reserve in Russia, and Baviaanskloof Reserve in South Africa.

Established as a national park in 1919, the Grand Canyon was listed as a UNESCO World Heritage site in 1979. One UNESCO criterion reads, “Widely known for its exceptional natural beauty and considered one of the world’s most visually powerful landscapes, the Grand Canyon is celebrated for its plunging depths; temple-like buttes; and vast, multihued, labyrinthine topography. Scenic wonders within park boundaries include high plateaus, plains, deserts, forests, cinder cones, lava flows, streams, waterfalls, and one of America’s great whitewater rivers.”

Located on the island of Hawaii, the latter park contains two of the world’s most active volcanoes: Kilauea and Mauna Loa. According to the National Park Service, Kilauea has been erupting almost continuously since 1983, and Mauna Loa last erupted in 1984. The U.N. stamp shows lava flowing at night.

In 1996, San Marino issued a set of four stamps to celebrate the 50th anniversary of UNESCO. Yellowstone National Park is featured on the 450-lira denomination (Scott 1371).

Established March 1, 1872, Yellowstone is not only the oldest national park in the United States, it is also considered the world’s first national park. One of the park’s more than 300 geysers is pictured on a 1981 World Heritage Year stamp from Togo (Scott 1119).

In addition, Mesa Verde and Olympic parks are represented on UNESCO World Heritage Sites stamps issued by Mozambique (Scott 2056c) and the Maldives (2237a), respectively.

A current series of stamps from Japan highlights World Heritage sites from around the world. A photograph of the Colorado River running through the Grand Canyon is reproduced on a 2013 80-yen stamp (Scott 3523) in that series.

Other stamps, while not specifically mentioning World Heritage, feature U.S. national parks as natural wonders of the world, including the Grand Canyon (Kyrgyzstan Scott 93, The Gambia 1948, and St. Vincent 2229e) and Haleakala in Hawaii (St. Vincent 2230).

In at least one instance, a scene from a U.S. national park was shown in error.

In 1931, when the Philippines was administrated by the United States, the Bureau of Engraving and Printing produced a pictorial set of stamps for use in the Philippines. The 18¢ denomination (Scott 358) is inscribed “Pagsanjan Falls,” and is supposed to show that waterfall in Luzon, the Philippines. However, instead it pictures Vernal Falls in Yosemite National Park.

The 18¢  red-orange stamp was issued May 3, 1932, as part of a pictorial set. It was withdrawn from sale on Nov. 17 of that year, but not before being overprinted for the round-the-world flight of Capt. Wolfgang von Gronau (Scott C32).

In addition to the aforementioned stamps from the United Nations and Guyana, at least a dozen other stamps purposely picture Yosemite.

In 2014, Liberia and St. Vincent issued stamps commemorating the 150th anniversary of the Yosemite Grant. Signed by President Abraham Lincoln on June 30, 1864, the act gave California Yosemite Valley and the Mariposa Big Tree Grove to be “held for public use, resort, and recreation.”

Because this was the first time that the U.S. government had set aside a wilderness area for preservation and public use, some people consider this the beginning of the national park system.

Photographs of the park are pictured on the pane of six stamps and a souvenir sheet from Liberia (Scott 2904-2905), and on the two panes of four stamps each and two souvenir sheets from St. Vincent (3906-3909).

Additional Yosemite stamps illustrate some of the other ways that U.S. national parks have been honored on U.S. stamps.

Gibraltar pictures the park on a 2011 stamp saluting the International Year of the Forests (Scott 1276), while The Gambia shows it as well as Yellowstone on 1994 stamps marking the 100th anniversary of the Sierra Club (1535d-f and 1536c-d).

A 2005 pane of six stamps from Sierra Leone highlighting the “nature’s wisdom” theme of Expo 2005 in Aichi, Japan, includes a stamp showing a rock climber in Yosemite (Scott 2791c).

Yosemite is even included on a stamp from Tuvalu marking the 60th anniversary of Queen Elizabeth’s reign in 2012 (Scott 1234b). The queen and Prince Philip visited the park in 1983.

There are other foreign stamps featuring U.S. national parks; this is not meant to be a complete list. But a fitting conclusion to the topic is a 2006 pane from Antigua and Barbuda saluting “National Parks of the USA.”

Also recommended for a collector interested in U.S. national parks on stamps are two of the ATA’s study units: the Americana Unit and the Earth’s Physical Features Study Unit.