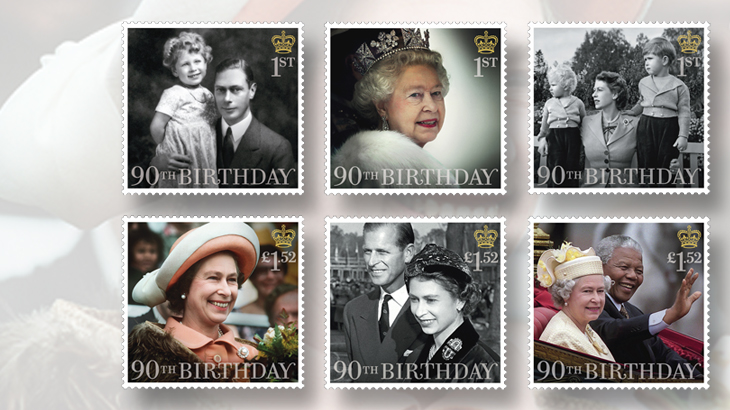 Royal Mail also is issuing six stamps for the 90th birthday of Queen Elizabeth II. Three of the stamps show scenes of the queen with her family, including an early photograph of Elizabeth with her father, and the other three honor the queen’s official wor 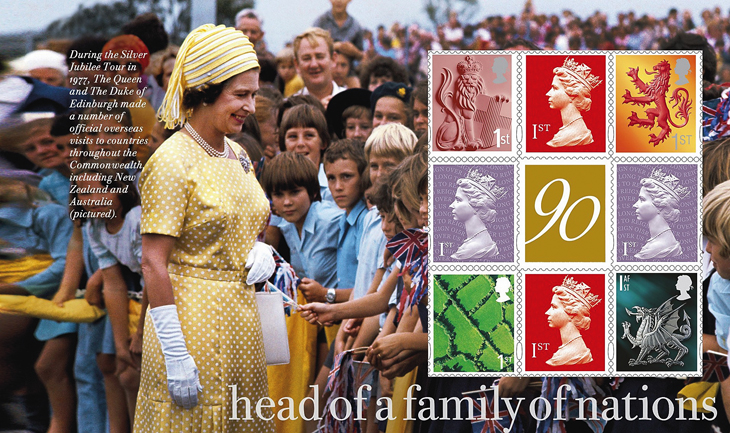 A prestige booklet provides additional information about and photographs of Queen Elizabeth, as well as four panes of stamps. The pane with eight nondenominated first-class definitive stamps and a label is shown. 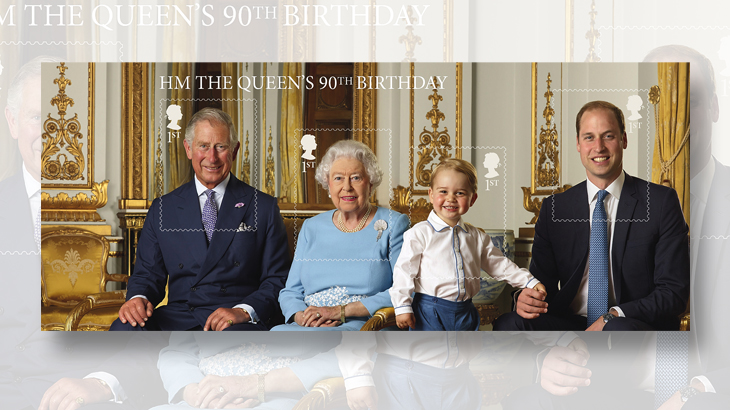 The other six stamps reproduce photographs representing the queen’s family life and her official duties.

In announcing the queen’s 90th Birthday stamps, Royal Mail said, “Already the longest reigning UK monarch, she is also the oldest reigning monarch in the world, and 90 years is a significant landmark.”

Ranald Mackechnie was commissioned by Royal Mail to take the four-generation photograph for the souvenir sheet.

From left to right, the four nondenominated first-class stamps (the current first-class rate is 64p) in the sheet show: Prince Charles, the queen, Prince George, and Prince William.

This is the first time that Prince George, born July 22, 2013, and third in line to the throne, has been pictured on a Royal Mail stamp.

Another family first in the 90th Birthday set is a stamp picturing the queen with her father. The black-and-white photograph, circa 1930, was taken by Marcus Adams.

This stamp is one of three se-tenant first-class stamps printed in sheets of 60 (available in panes of 30 at most postal outlets).

The second stamp in this sheet depicts the queen at the state opening of Parliament in 2012.

The third stamp pictures the queen with two of her children, Princess Anne and Prince Charles, in 1952 in a photograph taken by Lisa Sheridan.

Another se-tenant strip includes three £1.52 stamps, paying the rate for mail to Europe weighing up to 100 grams.

Starting on the left, the first stamp pictures the queen during her 1977 visit to New Zealand in a photograph by Anwar Hussein.

The official website of the British royal family, said: “The Queen has ruled for longer than any other Monarch in British history, becoming a much loved and respected figure across the globe. Her extraordinary reign has seen her travel more widely than any other monarch, undertaking many historic overseas visits. Known for her sense of duty and her devotion to a life of service, she has been an important figurehead for the UK and the Commonwealth during times of enormous social change.”

The center stamp shows a 1957 photograph of the queen with her husband, Prince Philip, Duke of Edinburgh. Married Nov. 20, 1947, the couple celebrated their 68th wedding anniversary last year.

The final stamp shows the queen and Nelson Mandela during his 1996 state visit to the United Kingdom. In this photograph by Julian Parker, Mandela is waving as he rides in an open carriage with the queen.

Stephens also designed the prestige booklet, which contains four panes of stamps, as well as text and illustrations.

Royal Mail reports that the booklet presents a chronological account of the life and reign of Elizabeth. The text for this 24-page booklet was written by Robert Hardman, the royal correspondent for Daily Mail.

One booklet pane includes the two £1.52 stamps showing the queen with Prince Philip and during her visit to New Zealand, respectively. The other £1.52 stamp and the three first-class stamps are presented in another pane, and the souvenir sheet in a third pane.

The fourth pane of the booklet includes eight first-class definitive stamps and a central label with “90” on a gold background.

Four of the definitives are Machins showing Arnold Machin’s profile of the queen against a red background and the amethyst purple background used for the 90th Anniversary of Reign stamps in 2015.

The other four stamps in the pane are country defintives depicting the crowned lion (England), the lion rampant (Scotland), farm fields (Northern Ireland) and a dragon (Wales).

Royal Mail is producing several additional products for the 90th Birthday stamps, including a limited edition prestige booklet with a gold-foil cover and a gold-foil label on the definitive stamp pane. Among the other products are first-day covers, 11 postcards reproducing the designs of the 10 stamps and the souvenir sheet, and a presentation pack.

The pack contains mint examples of the stamps, illustrations and text by Hardman about the queen’s public and private life.