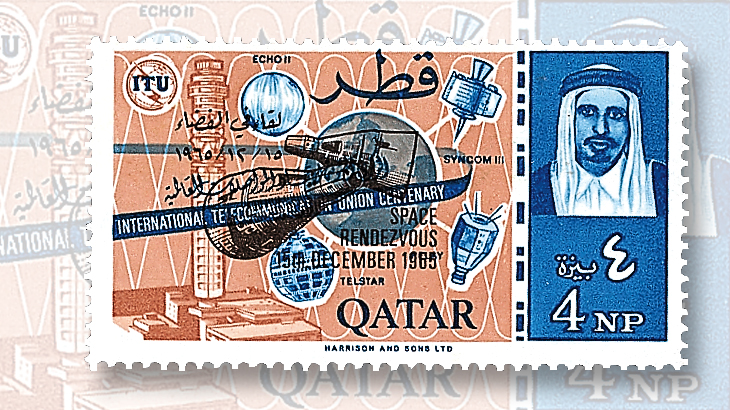 Qatar’s 1965 Satellite Telecommunications issue was overprinted in 1966. Look for the souvenir sheets overprinted and surcharged in various colors of ink.

You will notice that values for many stamps of Qatar are given in italics in the 2016 Scott Standard Postage Stamp Catalogue. This reflects the fact that the market for Qatari stamps has been in flux. Over the past several years, many of the sheikdom’s stamp issues were hot items. Some still are, but many are not.

In 1966, the overprinted stamps were surcharged with denominations in the new currency (Scott 117-117G). Black ink was used for most of the overprints on Scott 91-98 and 98a. But a few were also overprinted in blue or red, both of which are scarce.

The black-overprinted souvenir sheets were also surcharged in black ink with new currency denominations along with Scott 117-117G. This set of two souvenir sheets, which is not listed or noted in the Scott catalog, is scarce and worth about $800 in mint never-hinged condition.

You are most likely to find these scarce overprints and surcharges in really good space topical collections from the 1960s. Such collections were likely assembled by a high-end new-issue dealer.