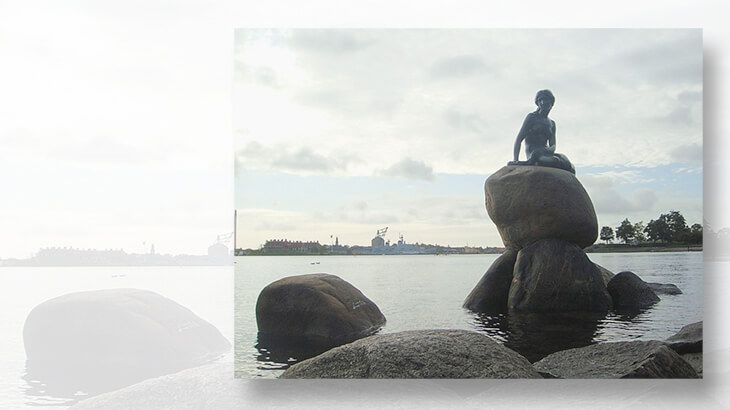 The famous Little Mermaid statue on Copenhagen’s waterfront is one of the must-see visitors’ sites in Denmark’s capital city. 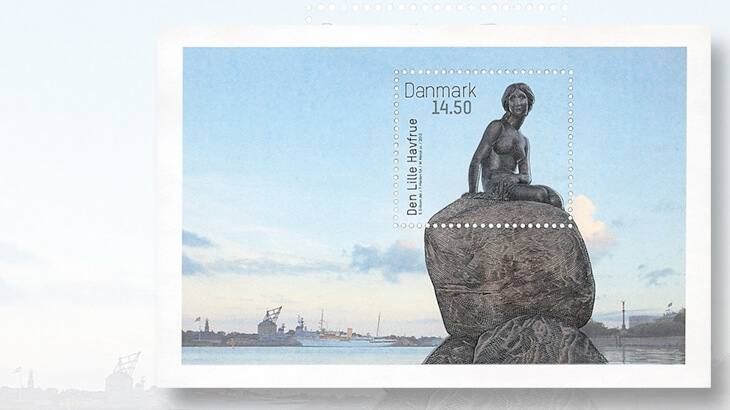 Among the Danish stamps picturing the Little Mermaid is this one in a souvenir sheet commemorating the sculpture’s centenary. 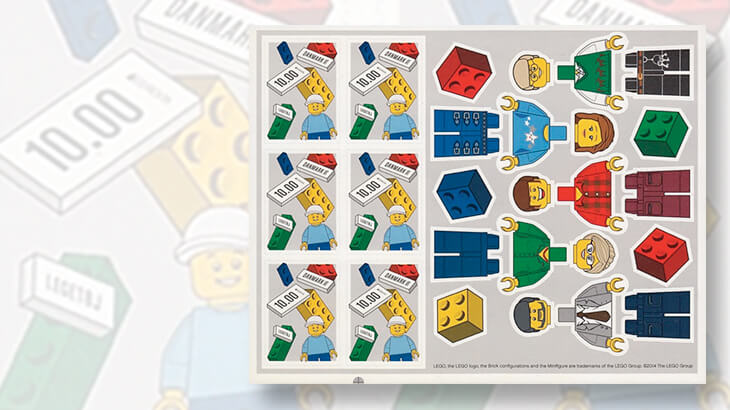 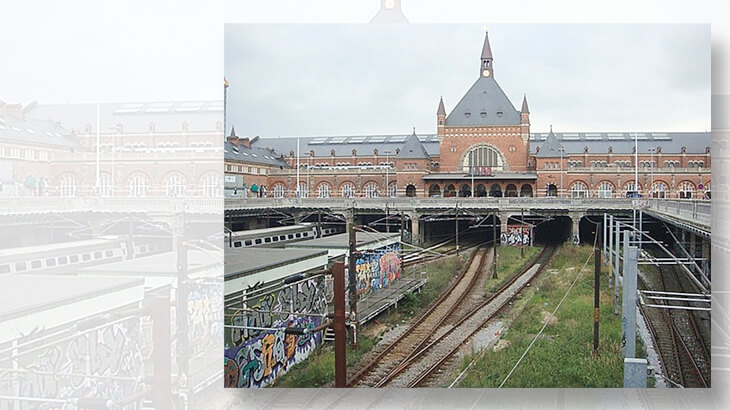 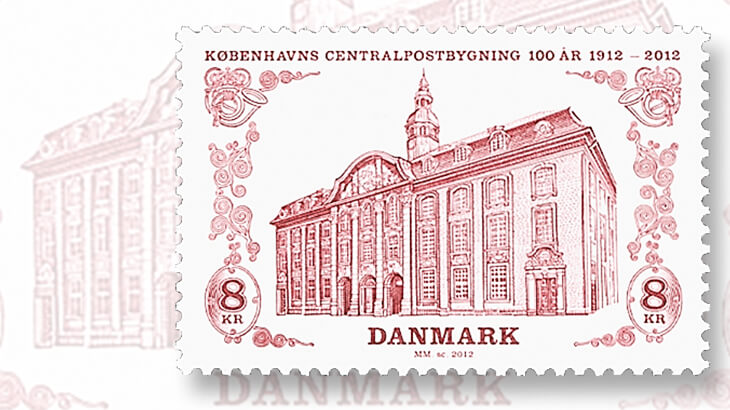 An engraved stamp was issued Sept. 12, 2012, to celebrate the 100th anniversary of Copenhagen’s central post office designed by Heinrich Wenck. 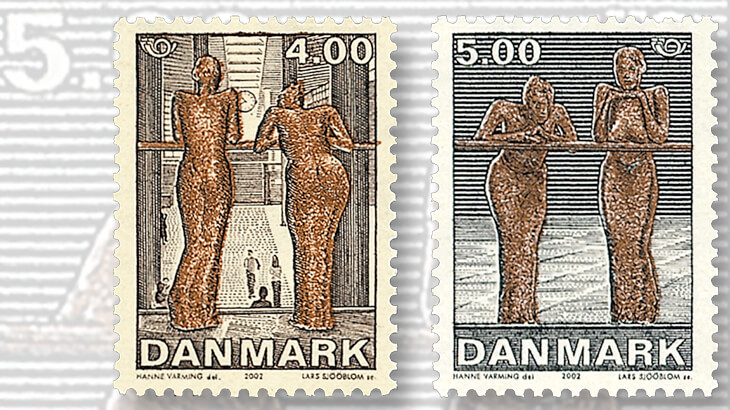 One of two stamps from Denmark in 2002 that depict views, front and back, of a pair of life-sized bronze sculptures at the Copenhagen Airport. 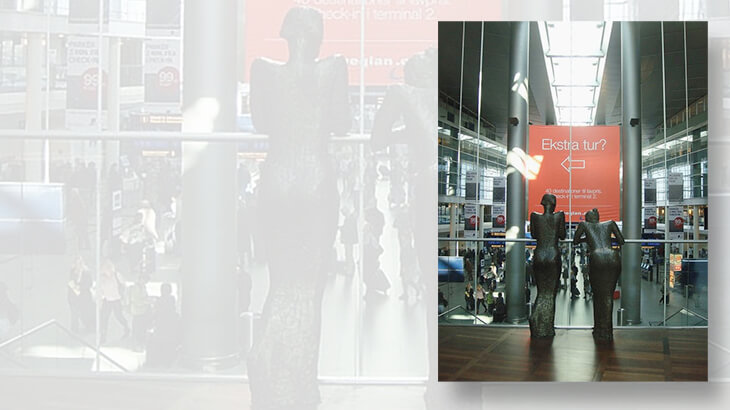 The sculptured figures “greet” passengers and visitors in the Copenhagen Airport arrival hall.
Previous
Next

Most travelers to Copenhagen go to see the famed Little Mermaid statue on the waterfront, and visit the Tivoli Gardens amusement park and the picturesque 17th-century Nyhavn waterfront district. I did all of those things, too, but the highlight of my visit was the philatelic experience.

In addition to stamp-related destinations such as the Post and Tele Museum, there were surprises for collectors like me everywhere I went, and it was a rewarding trip.

Two of my favorites are a pair of stamps issued by Denmark in 2002 showing two female figures, formed in bronze, leaning over a railing (Scott 1222-1223).

They are a sculpture called The Girls in the Airport by artist Hanne Varming, but I had no idea that the actual figures were literally at an airport until I landed at the Copenhagen Airport.

In the arrival hall, I walked past two oddly familiar silhouettes leaning against the railing and realized I was seeing the subjects of the 2002 stamp set. The two stamps depict the figures from the front (Scott 1222) and from the back (1223), with glimpses of the airport hall in the background.

Denmark is not a very large country, but many of its businesses, brands, and products are famous around the world.

For example, Lego is no doubt one of the favorite toys of both children and adults worldwide. The toy building bricks originated in Denmark in 1932, and Danes are proud of them.

On Jan. 2, 2015, Denmark issued a set of Lego stamps (Scott 1703-1704) as its part of that year’s Europa series, whose theme was old toys. Lego modular brick systems with easy-to-follow instructions are simple to assemble and then separate again, encouraging the creativity of a player of any age.

More recently, Lego added to its popularity with the release of minifigures, introduced in 2010. The small collectibles are based on themes of movies, popular culture, sports, and history. They are sold in unmarked sealed packages, and so a full set is difficult to collect. Many of the hard-to-find minifigures are sought after by serious collectors around the world.

Denmark’s colorful stamps of 2015 represent Lego bricks, and the selvage on the souvenir sheet is printed with minifigure stickers so users can add “playability” to their everyday mail.

Leaving the airport and entering the city, I was impressed by the beautiful architecture of the Copenhagen Central Station, the main railway station in the capital city and the largest in Denmark.

The post building’s centenary was celebrated in 2012 with a stamp (Scott 1612) and an attractive prestige booklet. Included in the booklet were miniature sheets as page inserts and reprints of historic postcards, all of which made a wonderful souvenir for stamp collectors.

The post office located inside the railway station is for routine postal use rather than for stamp collectors, and there is no philatelic counter.

However, I was pleased to be able to mail postcards inside the railway station and from the Central Post Building next door.

You cannot miss the Little Mermaid, both the actual statue by sculptor Edvard Eriksen (1876-1958) and representations of it on tourist items, when you visit Copenhagen.

The statue appeared on a Denmark stamp issued in 1989 (Scott 865) and in more recent years on a souvenir sheet marking the 100th anniversary of the unveiling of the statue (1643). That sheet, issued on Aug. 23, 2013, and depicting the Little Mermaid in intaglio printing, is one of the modern gems in my Denmark collection.

I have to admit that the actual Little Mermaid statue on the Copenhagen waterfront proved to be smaller than it had been in my imagination before my visit.

That said, the mermaid and other stamps with imagery from Hans Christian Andersen’s tales nicely display Denmark’s culture and influence on children’s literature around the world.

The highlight of my trip was the Copenhagen Post and Tele Museum, in Denmark’s oldest post office, dating to 1780.

The institution is Denmark’s national museum of post and telecommunications, containing the national collections of material on those subjects, as well as what is advertised as the largest stamp collection in Denmark.

Unfortunately, that beautiful museum closed at the end of 2015 in its center-city location that I visited. Plans are to re-open the museum in 2017 about a mile and a half away, in a 1920 post office building in Osterbro, a mainly residential area north of the city center.

In Osterbro, the museum will have a beautiful location near the Faelledparken, Denmark’s largest public park, and also close to the Little Mermaid and Copenhagen’s waterfront. I look forward to seeing the new museum.

Many of my Denmark stamps are illustrations of moments of everyday life, aspects of which I often saw during my trip to Copenhagen. The stamps represent a thought, a place or a mood, and nicely reflect Danish culture and its appreciation of simplicity and beauty.