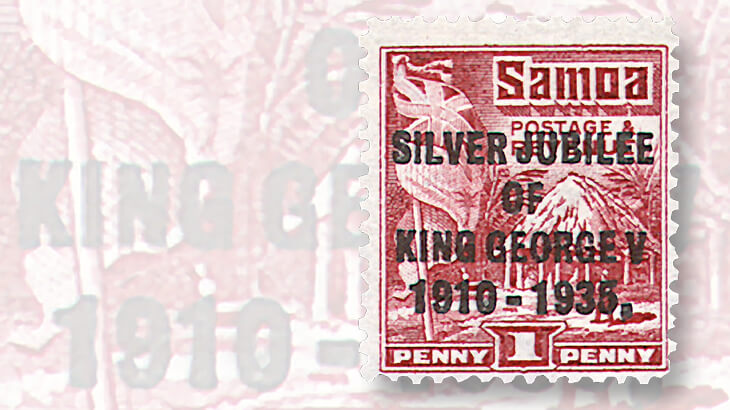 Three stamps of the 1921 Hut and Flag issue were overprinted in 1935 for the silver jubilee of King George V. 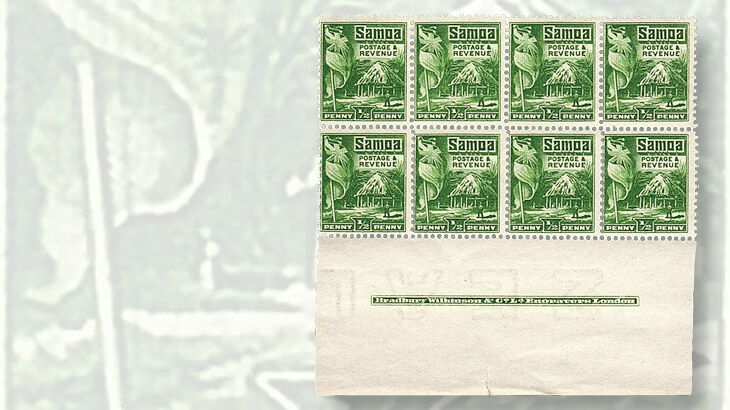 Dies for the Hut and Flag stamps were engraved by the London firm of Bradbury Wilkinson & Co., whose plate-maker imprint is shown in the bottom selvage of this block of eight. 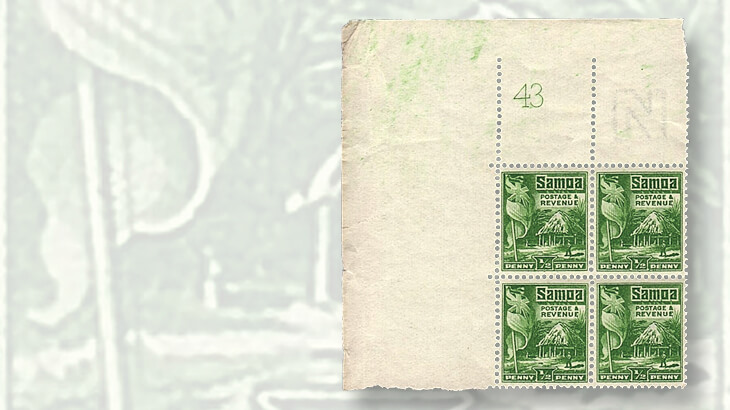 The numeral “43” in the upper-left corner of this block is the plate number. 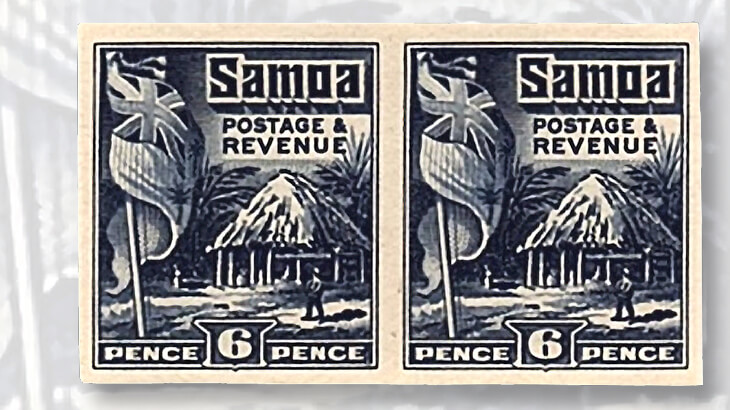 Plate proofs of the Hut and Flag stamps are another collecting option. This joined pair of proofs of the 6-penny stamp is in blue ink on watermarked paper. 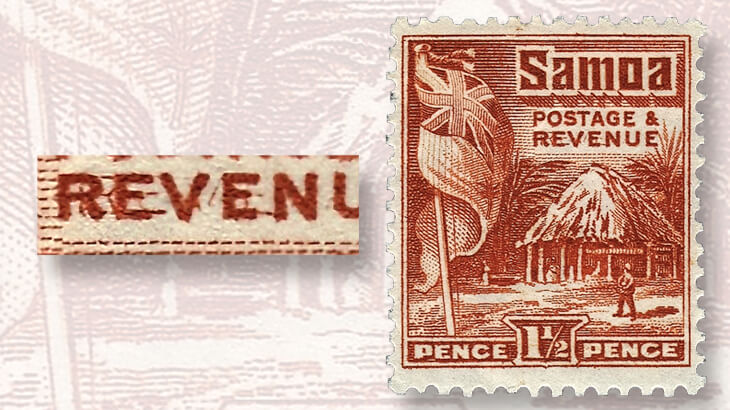 A variety of the 1½-penny Hut and Flag stamps worth searching for is the doubled “REVENUE” inscription, found on only one stamp in each sheet of 120. 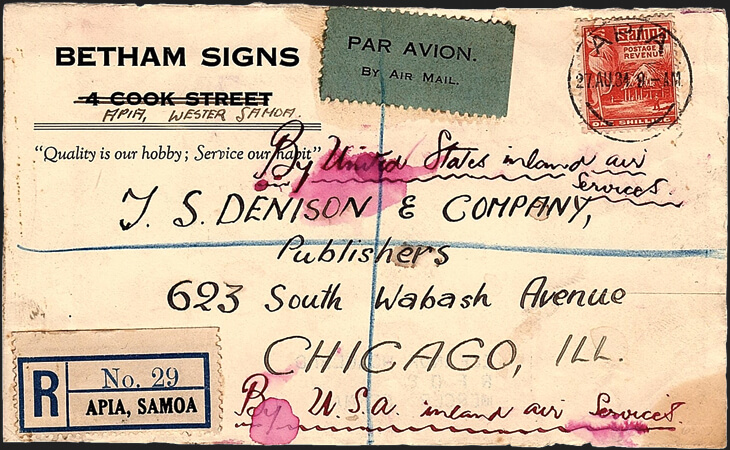 Covers franked with the Hut and Flag stamps, especially the higher denominations, are harder to find. This unusual cover mailed from Apia, Samoa, to Chicago in 1934 is registered and bears the 1-shilling stamp. 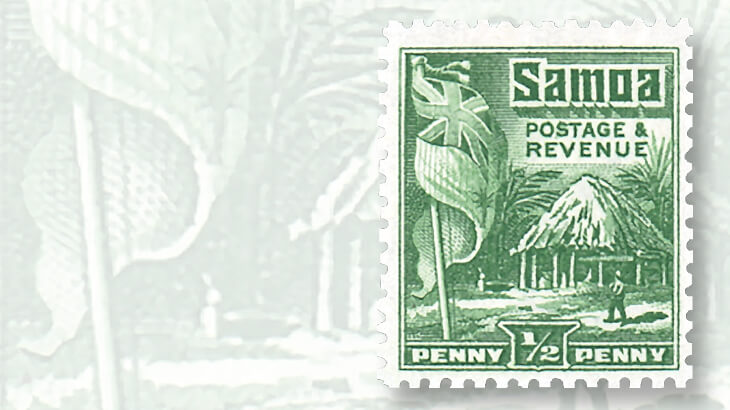 The entire set of 12 Samoa stamps of 1921 shared the same design showing a native hut and the British flag.
Previous
Next

Samoa was a politically unstable place from the time its first stamps were issued in 1877. Its governmental progression went from being an independent kingdom, to a German colony, to a British territory, then to a territory of New Zealand, and eventually to a League of Nations Mandated Territory under New Zealand’s jurisdiction.

Naturally, these changes affected the stamps, and the eventual League of Nations mandate meant there would be no more postal images of a Samoan king, German Samoa’s Kaiser’s yacht design or New Zealand stamps overprinted “Samoa.”

In 1921, when the mandate began, a new set of stamps was issued for Samoa. The dozen stamps (Scott 142-153) all show the same design: an image of a Samoan hut (known in Samoa as a fale, pronounced fah-lay) and a waving flag, referred to as an ensign. The Scott Classic Specialized Catalogue of Stamps and Covers 1840-1940 describes the design as “British Flag and Samoan House.”

The stamp was recess printed by the Government Printing Office at Wellington, New Zealand, on Cowan unsurfaced paper watermarked NZ and star.

Becoming familiar with the paper and watermark type will help collectors compare stamps printed in New Zealand that may have other paper types and watermarks. The type of paper often can mean big differences in the stamp’s value.

Samoa’s 1921 stamps were printed in sheets of 120 with plate numbers in the top selvage and the imprint of the plate maker in the bottom selvage, as shown in the second illustration: a block of eight ½-penny stamps (Scott 142) with the plate-maker imprint, and nearby, a plate block of four of the  ½d with the plate number in the upper-left selvage.

Collecting the Hut and Flag stamps starts off being interesting and quite inexpensive, but complications arise the deeper you delve into them — an aspect that is part of what makes these stamps fun to collect.

The 1½d stamp (Scott 144) has a variety that is worth finding: the word “REVENUE” doubled in the upper-right corner of the stamp. It takes a good eye and a powerful magnifier to reveal it.

This doubled variety occurred on the eighth stamp in the first row, so it is only on one stamp out of 120 in each sheet — pretty scarce and definitely worth finding.

Look closely at the fourth illustration here to see the doubling behind the word “REVENUE,” especially behind the first three letters.

In 1935, three of the denominations of the Hut and Flag stamps were overprinted to commemorate the silver jubilee of King George V. The 1d, 2½d and 6d denominations received a four-line overprint: “SILVER JUBILEE/OF/KING GEORGE V/1910-1935” (Scott 163-165).

Sheets of the three denominations were removed from stock for the overprinting. However, the 1d issue was in short supply, so the New Zealand Government Printing Office printed 500 new sheets of that denomination to be overprinted.

The 500 new sheets were printed on a different paper than was used for the original issues: one containing esparto grass fibers, resulting in a high-quality paper with a smooth finish like that of good writing paper.

There is an easy way to test the original 1d stamps without overprint for comparison with the 1d overprinted stamps on the two different papers, Cowan or esparto.

Grasp one of the original 1d stamps with stamp tongs and flick one of the upper corners. The thick Cowan paper will give off a high-pitched tone when flicked. Eventually, you should be able to recognize this “Cowan paper” sound.

Next, hold a 1d Jubilee-overprinted stamp and flick the corner. If the pitch is high, it is on Cowan paper. Keep testing the Jubilee overprints to find some that have comparatively lower pitches. Those would be printed on paper with esparto fibers. It takes a while to get the knack, but this method is easy and it works.

While we are on the Jubilee stamps, look for a difficult-to-find 1d overprint with perforations that are gauge 14 by 14½ (Scott 163a) rather than the standard 14 by 13½.

Odd as it may seem, the 1d Jubilee overprint with gauge 14 by 14½ perfs has considerable value (more than $100 mint, compared with 40¢ for the standard gauge) and is certainly worth the few minutes it requires to take the measurements with your favorite perforation gauge.

The next challenge is finding covers bearing the Hut and Flag stamps. This is not so easy, especially for the higher denominations.

Additionally, you might enjoy rounding out your collection with a single or a set of plate proofs that were printed in blue ink on watermarked paper. A joined pair of 6d stamps in this form is pictured in the last illustration.

The cost of these proofs varies widely, from $25 for a single plate proof to $900-plus for the entire set. If you want plate proofs, shop wisely.

The Hut and Flag stamps of Samoa are technically a little challenging and, with a few exceptions, relatively budget friendly. They’re definitely something to try if you are looking for a new area to collect.