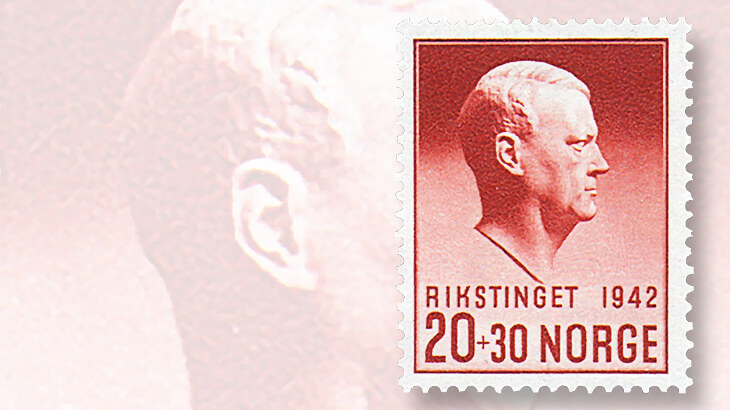 The man whose name is a synonym for traitor, Vidkun Quisling, appeared on a 1942 stamp when he became Norway’s minister-president. That issue’s design was repeated later that year on this stamp for his party’s national congress. 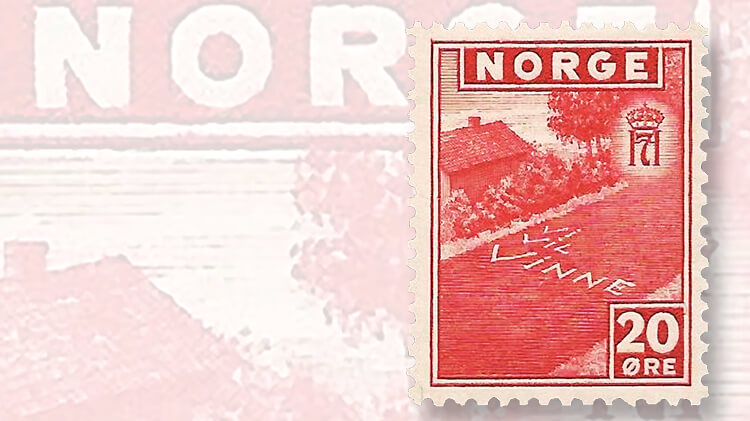 Expanding on the wartime “V for victory” symbol, Norwegians used the slogan “Vi Vil Vinne” – We Will Win. This stamp was issued in 1943 by Norway’s government-in-exile in London. 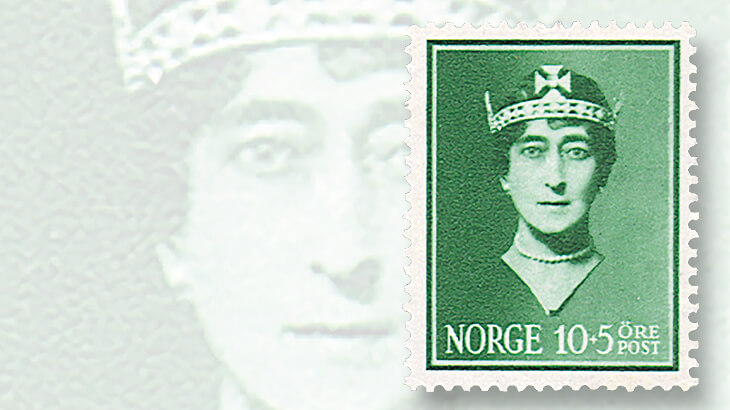 A set of 1939 semipostal stamps portraying Queen Maud became postally valid again in 1981, along with some other wartime issues. With 1980s cancels, the stamps have little value. 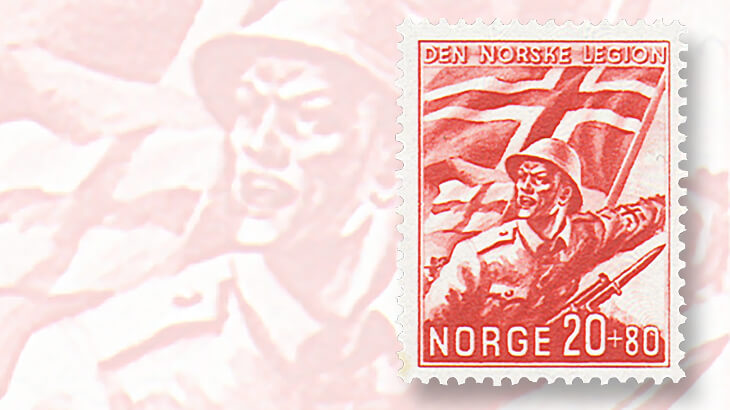 The Nazi-organized Norwegian Legion benefited from a semipostal issue in 1941. Used examples are harder to find because the Norwegian public hated the stamp. 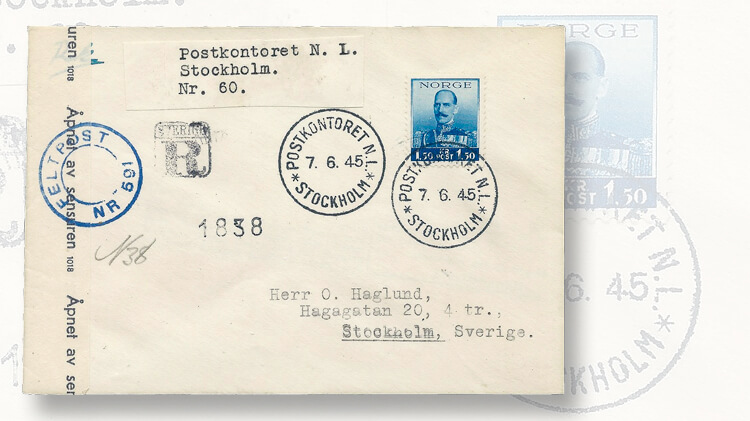 Earlier issues were valid for use during the war on Norway’s ships and in its government offices, such as this 1938 stamp on a cover mailed from the Norwegian Legation in Stockholm in 1945. 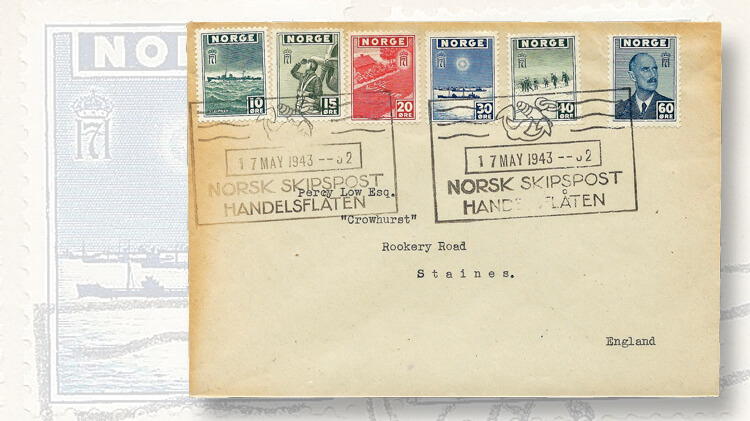 This cover franked with the six 1943 stamps issued from London was mailed aboard a Norwegian ship on May 17, 1943: Norway’s National Day. 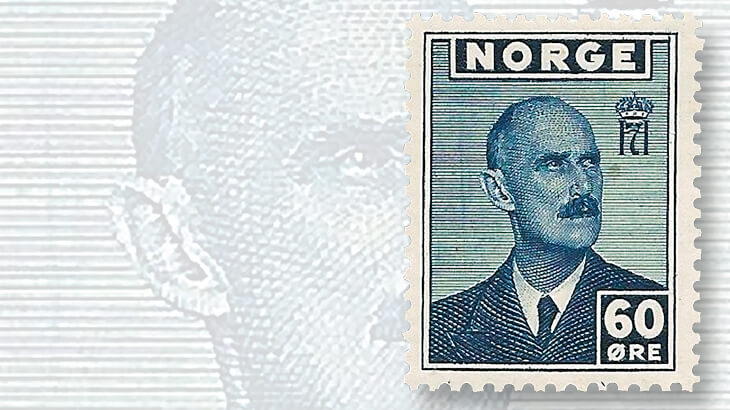 In 1943, Norway’s government-in-exile in London issued a set of stamps for use on Norwegian ships and in government offices. King Haakon VII appeared on the top denomination. 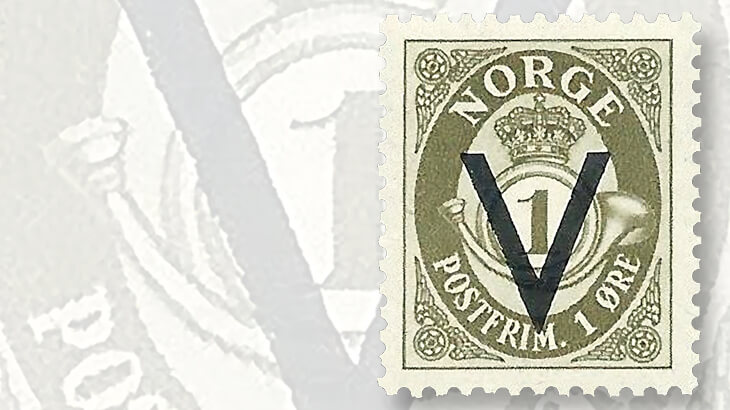 To counter the V symbolism, in 1941 the Germans overprinted all remaining Norway definitives with a V, intended to stand for Verlierer (loser). 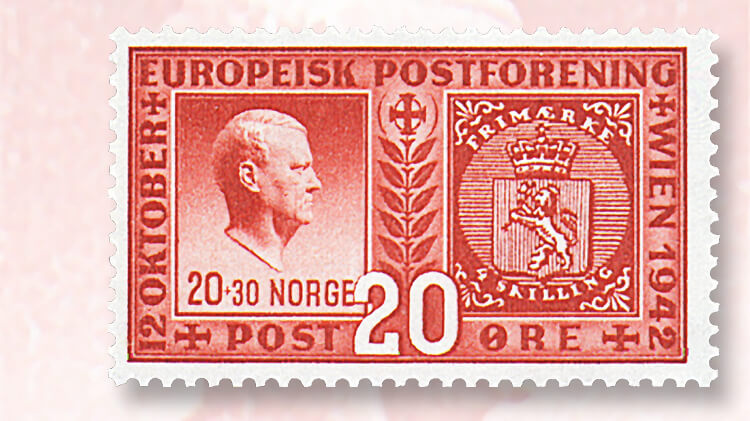 A stamp for the European Postal Congress in Vienna in October 1942 used the design of one of the Quisling stamps along with Norway’s first issue.
Previous
Next

There are very few Norwegian words that have entered into the English language, but “quisling” is one such word. It can be used to describe a traitor or collaborator.

Vidkun Quisling was the leader of the puppet government in Norway during World War II, but more about him later.

When the war broke out in 1939, Norway never expected a German attack and the country’s defenses were rather limited. Norway had close ties with Great Britain, however, and Winston Churchill, the future British prime minister but at that time a member of the British War Cabinet, realized that Norway might be the target for a German attack. On April 8, 1940, British vessels started laying mines off Narvik, in the north of Norway.

In the early morning of the following day, Hitler launched Operation Weserubung, whereby both Denmark and Norway were to be occupied. German forces quickly took control of the major Norwegian cities, but the coastal artillery in the fjord leading to the port of Oslo, Norway’s capital, went into action and managed to sink a German warship. This delayed the German advance, and the royal family, government ministers and members of parliament boarded a train that took them to a safer location. The Norwegian government refused to accept German demands of capitulation.

Norwegian military forces continued their resistance until the end of May, but had to give up their struggle. The king and the government left the country on June 7 and settled in London, where they continued their opposition for the duration of the war.

A Norwegian army of some 15,000 men took part in the Allied war effort. Many young Norwegians managed to escape to Britain, and many then were flown back to Norway to engage in various sabotage missions.

Within Norway, a strong resistance movement developed and attacked both civilian and military targets. This led to very dangerous conditions, and some 43,000 Norwegians escaped to neutral Sweden, where there was a Norwegian legation in Stockholm. This legation was in the hands of the London-based government-in-exile. Sweden helped to train police forces to be sent back to Norway when the occupation ended.

Returning to April 9, 1940: Quisling, a sometime diplomat and marginal politician, attempted to seize power by making a radio speech claiming that he had formed a “national” government. He was the leader of Nasjonal Samling (National Unity Party), which can best be described as a Norwegian Nazi party. However, his time of glory had not yet come, as the Germans created their own government, though using members of the NS.

Hitler remembered Vidkun Quisling, making him minister-president of the Norwegian state administration in 1942. It was a puppet government, with a German civilian administrator and everything subject to German orders.

On Feb. 1, 1942, a semipostal stamp (Scott B25) denominated 20 ore+30o was issued to mark Quisling’s appointment as minister-president. The surtax of 30o went to a fund for the families of soldiers killed on the front lines. On Feb. 2, an identical stamp (B26) was released overprinted in red with the date “1-2-1942.” There were 250,000 stamps printed of each version.

The stamps feature a right-profile likeness of Quisling, and it appears the two stamps were highly unpopular. Today, the stamps are quite uncommon if genuinely postally used at the time, and they are seldom seen on cover.

In September 1942, the Nasjonal Samling held its eighth annual party congress, and the Quisling semipostal stamp was reissued on Sept. 26 (Scott B27) with the words “Rikstinget 1942” (National Council 1942) added beneath Quisling’s image.

As these three Quisling semipostal issues are a lot scarcer used than mint, unscrupulous individuals have added forged cancellations, so a warning is due here.

Quisling returned to postage stamps Oct. 12, 1942, with two denominations (Scott 253-254) commemorating the European Postal Congress in Vienna. The design includes an image of the Feb. 1, 1942, Quisling semipostal stamp along with the coat-of-arms design of Norway Scott 1 of 1855. These Vienna Postal Congress stamps are very common, both mint and used, but of particular interest to collectors of stamps-on-stamps.

The Norwegian postal service continued to release stamps during the years of occupation. Some had designs relating to Norwegian history; others were issued in support of the government or German war efforts.

On July 24, 1939, a set of four semipostals (Scott B11-B14) featured a portrait of Queen Maud. The stamps were sold in support of the Queen Maud Relief Fund. The set was withdrawn on Sept. 30, 1940, and used examples from the original period of circulation are once again far scarcer than mint varieties. The Germans confiscated the remainders, which were sold to collectors abroad.

Strangely enough, on Sept. 1, 1981, these stamps, along with several other wartime issues, once again became postally valid. These issues with 1980s cancels are worth less than 50¢ each.

Some 8,000 young Norwegian men took part in the war by joining the Norwegian Legion, Den Norske Legion, originally intended to fight mainly in Finland. This force was formed in 1941 in German-occupied Norway. These staunch supporters of Nazi Germany were celebrated with a special semipostal stamp issued on Aug. 1, 1941. The stamp carries a denomination of 20o plus a surtax of 80o, which benefited the Legion.

The stamp pictures a Norwegian legionary along with Norwegian and Finnish flags. It lost its postal validity on May 15, 1945. The Norwegian Legion stamp had a printing of 100,000 and has always been quite costly, though in no way rare. This is another stamp that most Norwegians hated and avoided using.

Quite early on in the war, Prime Minister Churchill became famous for defiantly forming two of his fingers into a “V” for victory. The use of the V symbol became quite popular in Norway, and people wrote it everywhere. Many Norwegians adopted the slogan “Vi Vil Vinne” (We Will Win) in their struggle against the German invaders and Quisling’s puppet regime. The slogan is shown written on a street on Scott 263, a 20o stamp issued in 1943.

The Germans obviously were far from pleased with finding the letter V or the slogan wherever they went, and in 1941 overprinted all remaining definitives of 1937-41 with a capital V in black (in one instance, in white). In German, V is the first letter in the word Verlierer — “loser” in English. However, this did not prevent the Norwegians from continuing the use of V for victory.

At the time, Norway had a huge merchant marine, which was used to ship supplies from North America to Britain during the war. These ships were considered to be Norwegian territory. In 1943, the Norwegian government-in-exile in London released a set of stamps (Scott 261-266) with designs featuring war-related subjects, plus a portrait of King Haakon VII on the high-denomination 60o stamp (266). These stamps were postally valid on board Norwegian vessels and at a number of government offices, such as the Norwegian Legation in Stockholm.

Shown nearby is an obviously philatelic cover, franked with Scott 261-266, mailed aboard a Norwegian ship on May 17, 1943, Norway’s National Day.

These 1943 stamps, along with older Norwegian issues, were actually used and fully accepted as postage on letters mailed on Norwegian ships and government offices throughout the war. Pictured nearby is a registered and censored cover mailed from the Norwegian Legation in Stockholm in June 1945, franked with Norway Scott 178, which was released in 1938.

After the war, the London set was released throughout Norway for use as regular postage (along with two more denominations, Scott 259-260, using designs from the London set and issued in 1945). All issues with a strong connection to the German occupation were withdrawn and invalidated.

Vidkun Quisling and 24 of his most loyal collaborators were sentenced to death and executed in October 1945. Thousands of others were imprisoned for various periods of time.

The hardships endured during the years of German occupation certainly explain why the Norwegian people celebrate their National Day with a lot of fervor.