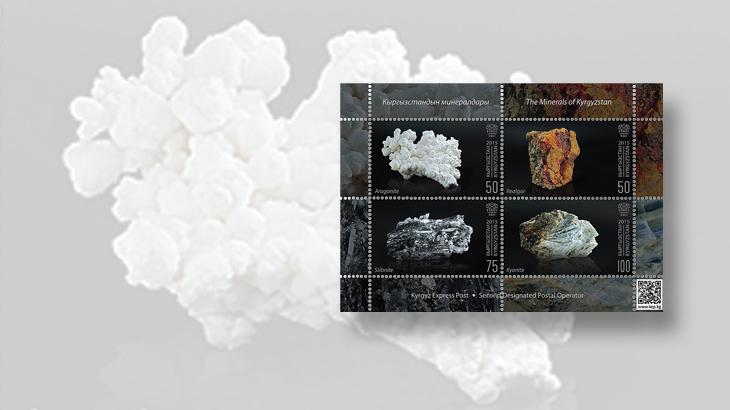 A souvenir sheet issued by Kyrgyz Express Post includes four se-tenant stamps featuring some of the minerals found in Kyrgyzstan. 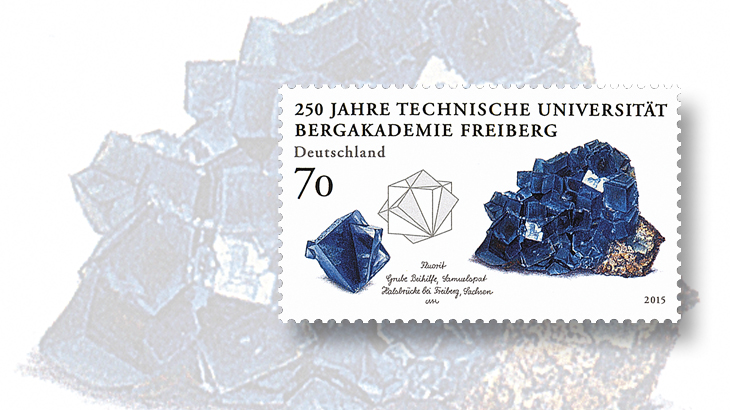 A Germany stamp marking the 250th anniversary of the Freiburg University of Mining and Technology pictures fluorite from a nearby mine. 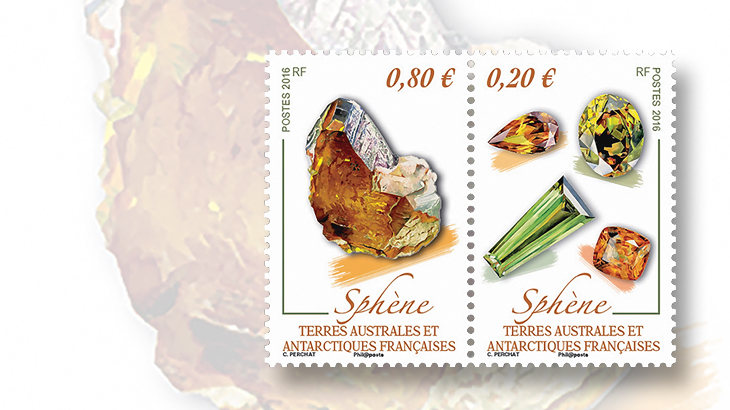 A se-tenant pair of stamps in the French Southern and Antarctic Territory’s Mineral series depicts sphene, also known as titanite. 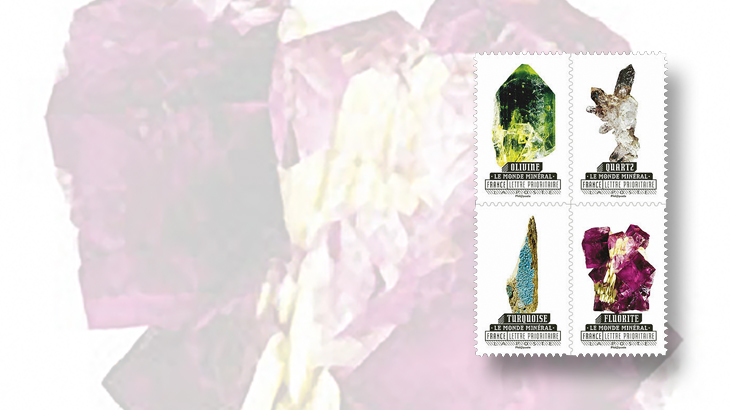 The stamps picture minerals from the collection of the Mineralogy Museum at the Ecole Nationale Superieure des Mines de Paris. This engineering school is often referred to as MINES ParisTech.

The stamps are self-adhesive and nondenominated. The inscription “lettre prioritaire” means that they pay the first-class rate, currently €0.80.

As its name suggests, olivine is an olive-green color. It is also called peridot and chrysolite. It is a common mineral, as is quartz.

Although turquoise is associated with the American Southwest, it has been mined since ancient times in Egypt and Iran.

The word fluorescent comes from the mineral fluorite, which glows under ultraviolet light.

Sylvie Patte and Tanguy Besset designed the stamps. Philaposte printed them by gravure.

The French Southern and Antarctic Territories has a long history of issuing Minerals stamps that began Jan. 1, 1989, with two stamps picturing mesotype and analcime (Scott 146-147).

The stamps were issued Jan. 2 in a se-tenant (side-by-side) pair. Gemstones in shades of orange, yellow, brown and green are shown on the €0.20 stamp. An uncut stone is pictured on the €0.80 denomination.

Claude Perchat designed the stamps. Philaposte printed them by a combination of offset and seriography (screen printing) in panes of 20.

Minerals of Kyrgyzstan are displayed on four stamps issued Jan. 6 by Kyrgyz Express Post, one of the two postal operators in this central Asian republic.

Kyrgyz Express Post is the second of the two postal operators, and notes this with the inscription “Second Designated Postal Operator” in the bottom selvage of the souvenir sheet of four Minerals stamps. The original postal operator is Kyrgyz Pochtasy.

In announcing the four stamps, Kyrgyz Express Post said: “Kyrgyzstan is a mountainous country, famous for its vast mineral wealth. Besides the deposits that are ready to be mined (gold, tungsten, tin, copper, lead, etc) and the non-ore deposits, there is also a rich and diverse mineralogical base. Beneath Kyrgyzstan lies a great quantity and variety of minerals, including unique types that cannot be found anywhere else on our Planet. Geologists from our country make huge efforts to study and bring to the attention of the public and to national economy, these unique resources. Every year new types of minerals are discovered in Kyrgyzstan.”

The two 50-som stamps picture aragonite and realgar with orpiment. The former is found in karst caves in the south of Kyrgyzstan, and a deposit of the latter is located in Khaidarkan.

The 75s denomination depicts stibnite, which like realgar and orpiment is found in hydrothermal areas.

Illustrated on the 100s stamp is kyanite, which has several industrial uses and also is used in the making of porcelain products.

Olga Derej designed the stamps, using photographs taken by Alexey Sorokin at the Museum of Geology.

Kyrgyz Express Post worked with the Institute of Geology of the National Academy of Sciences and geologist Muratbek Eralievich Karimshakov in creating these stamps.

Nova Imprim printed them by offset in separate sheets of six, as well as in a souvenir sheet with the four stamps se-tenant.

This €0.70 stamp was issued Dec. 13, 2015, to mark the 250th anniversary of the Freiburg University of Mining and Technology. Established in 1765 by Prince Franz Xaver of Saxony, it is considered the oldest mining university in the world.

Elisabth Hau designed the commemorative. Bagel Security Print produced it by offset in panes of 10.

According to an inscription on the stamp’s design, the fluoride is from the Beihilfe Mine, Halsbrucke near Freiberg, Saxony.