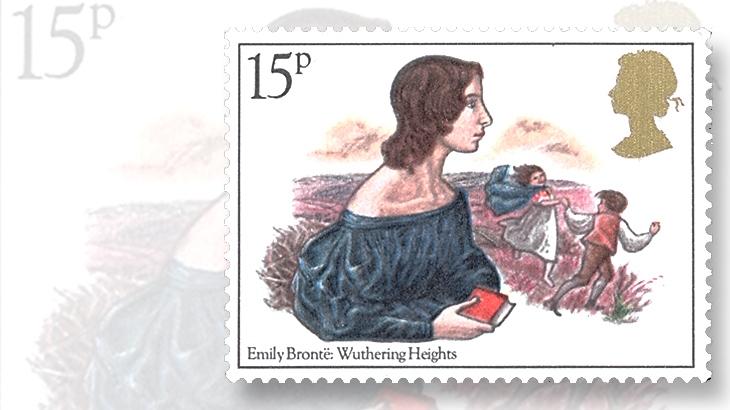 Novelist Emily Bronte was honored on a 15-penny British stamp issued in 1980.

Novelist Emily Jane Bronte was born July 30, 1818, in the village of Thornton, West Yorkshire, England. The Bronte family included six children, but eldest daughters Maria and Elizabeth both died of tuberculosis before entering their teens.

Emily is known most famously for writing Wuthering Heights, her only novel, completed in 1847 and published that year under the pseudonym Ellis Bell. She also wrote a number of poems and published some in collaboration with her sisters Charlotte and Anne.

Wuthering Heights was published just a year after Charlotte’s famous Jane Eyre, but Emily died of tuberculosis at the end of the following year, 1848, at just 30 years old.

The same disease had claimed her brother Branwell only months before, and would also take her sister Anne the following year. Charlotte also died of tuberculosis, at age 38, in 1855.

Emily Bronte and her sister Charlotte are each commemorated on stamps from Great Britain issued in 1980. The 15-penny Emily Bronte stamp (Scott 917) also depicts a scene from Wuthering Heights.