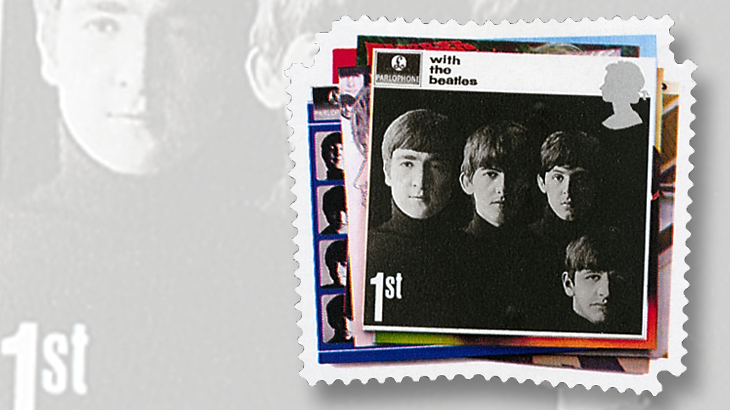 Ringo Starr is pictured in the lower right corner on the cover of With the Beatles, which serves as the central design for this 2007 stamp from Great Britain's Royal Mail.

Ringo Starr was born Richard Starkey on July 7, 1940, in Liverpool, England. As a youngster he struggled in school after lengthy absences following complications from appendicitis at age six and tuberculosis at age 12. It was during his recovery from the latter illness that his interest in drumming began.

At 17 he was drumming for the Eddie Clayton Skiffle Band, and in 1959 he joined Rory Storm and the Hurricanes. He was invited by John Lennon, Paul McCartney and George Harrison to become a member of the Beatles in 1962.

Starr sang lead vocals with the group on occasion, including on the No. 1 hit song Yellow Submarine, and he has long been recognized as one of the top drummers in rock ’n’ roll. He was inducted into the Rock and Roll Hall of Fame in 1988 as a member of the Beatles, and again in 2015 as a solo artist.

As the Beatles were breaking up in 1970, Starr recorded the covers album Sentimental Journey, and followed it in the same year with Beaucoups of Blues. A 1971 non-LP single, It Don’t Come Easy, was a top 10 hit, and his 1973 third album, Ringo, yielded the hits Photograph, You’re Sixteen and Oh My My.

His 18 solo studio albums include the most recent, Postcards from Paradise, released March 31, 2015. Starr continues to tour with his All-Starr Band, whose changing lineup has included a number of high-profile musicians.

Starr has appeared on a number of stamps from different countries as a member of the Beatles. A 10-stamp Beatles set issued by Great Britain’s Royal Mail in 2007 includes several stamps that picture Starr with the other members of the group on reproductions of Beatles album covers (Scott 2420-2426).