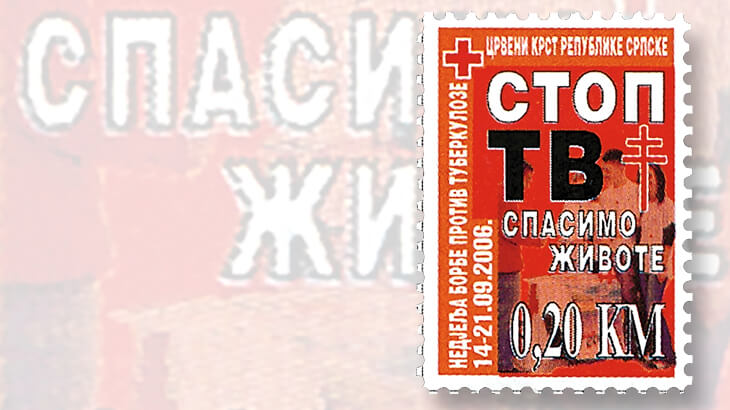 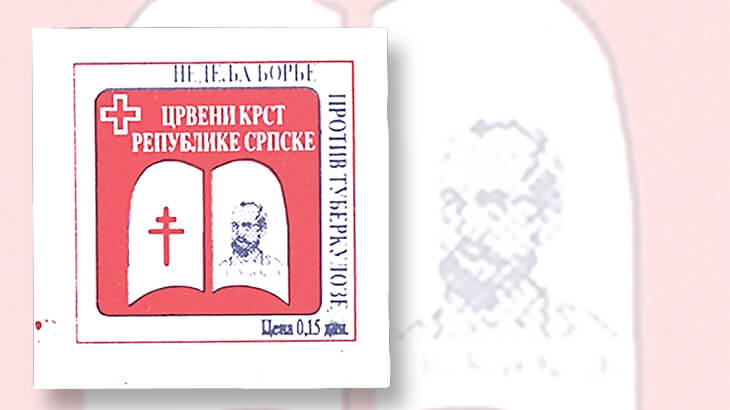 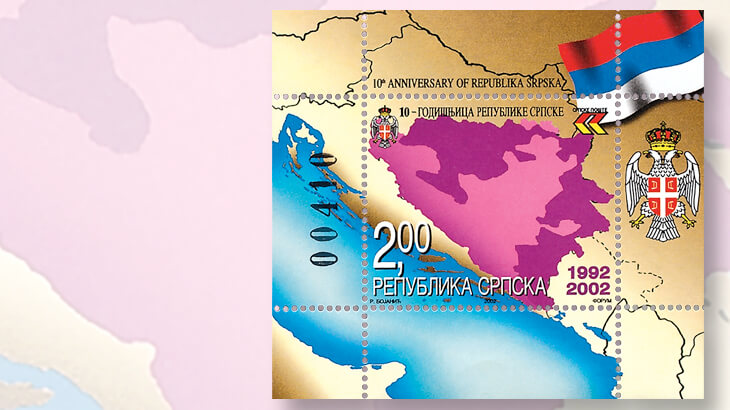 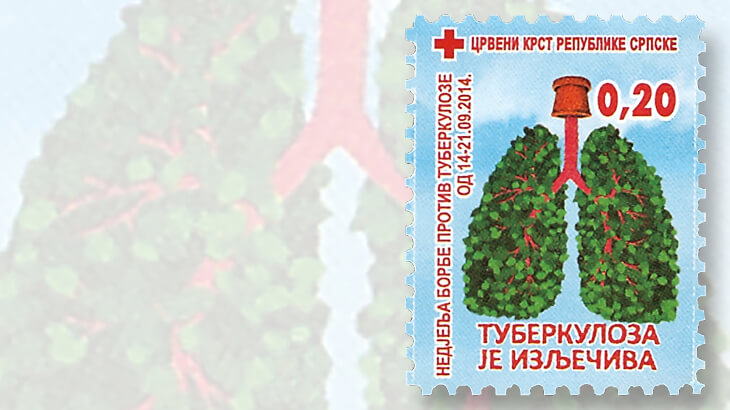 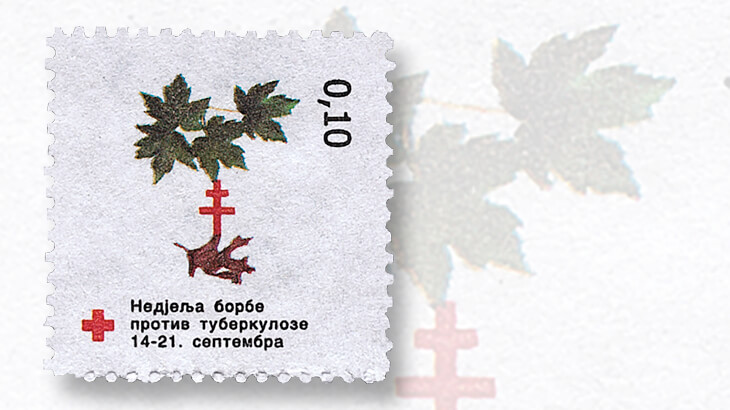 Since its formation in 1992, Republika Srpska has been one of the most prolific modern issuers of postal tax stamps.

Postal tax stamps are stamps that show payment of a required tax on mailpieces mailed on a certain date in a given period of time. Additional stamps are required to pay postage on the mailpiece.

Republika Srpska stamps are listed in Vol. 1 of the Scott Standard Postage Stamp Catalogue under Bosnia and Herzegovina (Serb administration).

The imperforate stamp, printed by lithography, was issued Sept. 14, 1997. It was required on all mail posted the week of Sept. 14-21, 1997. Sept. 14 to 21 in Republika Srpska is Anti-tuberculosis Week. The design shows a pair of lungs with a portrait of Koch on the right lobe and the cross of Lorraine on the left lobe.

Postally speaking, Bosnia and Herzegovina is one of those places where you really can’t tell the players without a program.

Bosnia was conquered by the Ottoman Empire in the 14th century. In 1878, it came under the administration of the Austro-Hungarian Empire. In 1908, the Habsburgs annexed it outright.

It was Serbian outrage over the annexation of Bosnia that led directly to the outbreak of World War I. After WWI, Bosnia and Herzegovina became part of the Kingdom of Serbs, Croats, and Slovenes (later known as Yugoslavia). With the fall of communism in 1990, Yugoslavia began to come apart at its national seams.

Tensions between Bosnia and Herzegovina’s three main population groups erupted into open warfare in 1992. The Croats and Bosniaks generally cooperated against the Serbs, but occasionally took a break from cooperating to fight each other.

During the war, horrible atrocities were committed by all sides against unarmed and helpless civilians. However, the Serbs were the most organized and vicious in their campaign against enemy civilians.

In 1995, a NATO bombing campaign forced the Serbs to the peace table and the agreement known as the Dayton Accords was hammered out ending the war. Under the Dayton Accords, the country became the Federation of Bosnia-Herzegovina and Republika Srpska.

The boundaries of the federation can be seen on the 2-mark souvenir sheet of one (Scott 163) shown nearby. The area of Republika Srpska is shown in dark magenta, while the rest of the country is in pink.

The souvenir sheet, printed by lithography and perforated gauge 13¾, was issued Jan. 10, 2002, to commemorate the 10th anniversary of the founding of Republika Srpska.

The tricolor and national crest of Republika Srpska can be seen in the selvage at the right of the souvenir sheet. A serial number is printed in the selvage to the left of the stamp.

Issues of all three postal administrations are valid for domestic and international mail in their respective areas of cognizance.

Tuberculosis remains one of the world’s least controlled infectious diseases among humans.

At present, about one-third of the world’s population is infected with tuberculosis bacteria. About 1½ million people die of tuberculosis every year.

In developed nations, those who develop active tuberculosis are quickly treated and the disease is usually brought under control. In poor and undeveloped nations, medical help is often not available. Children in rural areas are particularly vulnerable.

Tuberculosis is most dangerous to people with weakened immune systems. About one-third of all patients with HIV who die, actually die of tuberculosis. Tuberculosis remains a huge health problem in most of Eastern Europe.

Koch (1843-1910) commemorated on the first Republika Srpsak postal tax stamp, was a German doctor and microbiologist. He was the first to identify the agents that cause tuberculosis, anthrax and cholera. The father of medical microbiology, in 1905 he received the Nobel Prize in physiology or medicine for his work on tuberculosis.

Republika Srpska normally issues two postal tax stamps a year: one for the fight against tuberculosis and one for the Red Cross.

A 10-pfennig Cross of Lorraine and Oak Leaves postal tax stamp (Scott RA9) is illustrated nearby. The stamp, printed by lithography and perforated gauge 10½, was issued Sept. 14, 2001.

The cross of Lorraine has been an anti-tuberculosis symbol since 1902. French physician Gilbert Sersiron advocated its use as a symbol of the crusade against tuberculosis.

Oak has been used in herbal remedies for centuries. The tannins in oak leaves, roots and acorns bind with proteins in human tissue to form a barrier against bacteria and reduce inflammation. Herbalists use snuff made from powdered oak root to treat pulmonary tuberculosis.

A 20-pfennig Stop TB postal tax stamp (Scott RA19) is illustrated nearby. The stamp, issued Sept. 14, 2006, was printed by lithography and is perforated gauge 10¾.

Interestingly on the stamp, the English word “Stop” is spelled in Cyrillic letters, while the abbreviation “TB” is given in Latin letters. At least the “B” is Latin; the “T” is the same in both alphabets.

The stamp, issued Sept. 14, 2014, is printed by lithography and perforated gauge 9. The design represents the lungs and bronchial passages with an upside-down tree growing from a pot.

In Republika Srpska, hospitals in Foca and Trebinje have tuberculosis wards. Tuberculosis control departments have been established in Bihac, Brcko, Doboj, Foca, Travnik, and Trebinje. Funds raised from the postal tax stamps go to help fund all of these facilities.