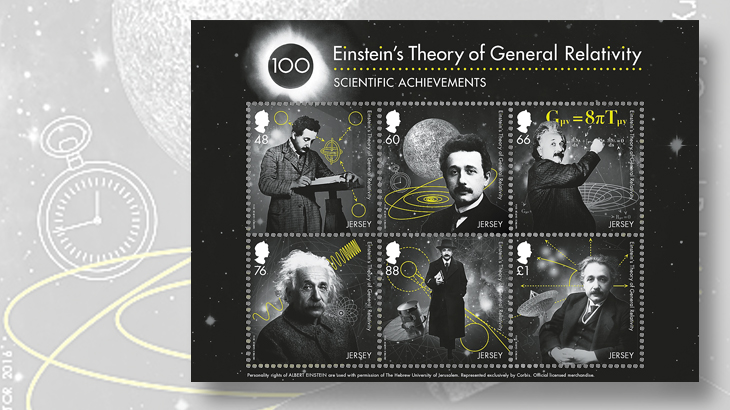 Jersey issued stamps and souvenir sheets May 11 on the 100th anniversary of the publication of Albert Einstein’s The Foundation of the General Theory of Relativity. This sheet includes the six stamps in the set. 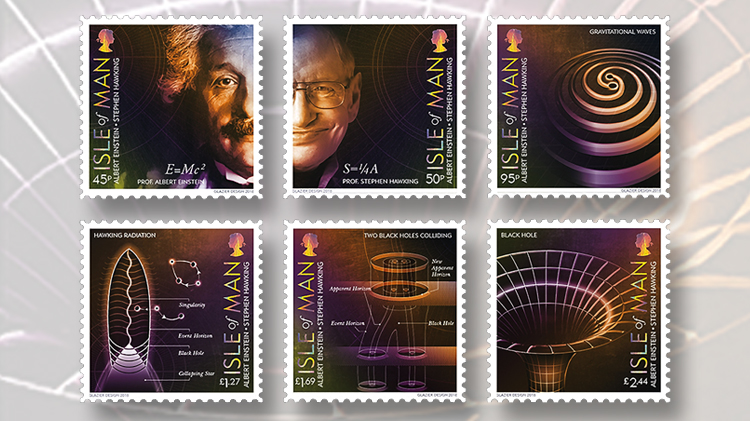 A new set of stamps from the Isle of Man features both Albert Einstein and Stephen Hawking and representations of their theories. 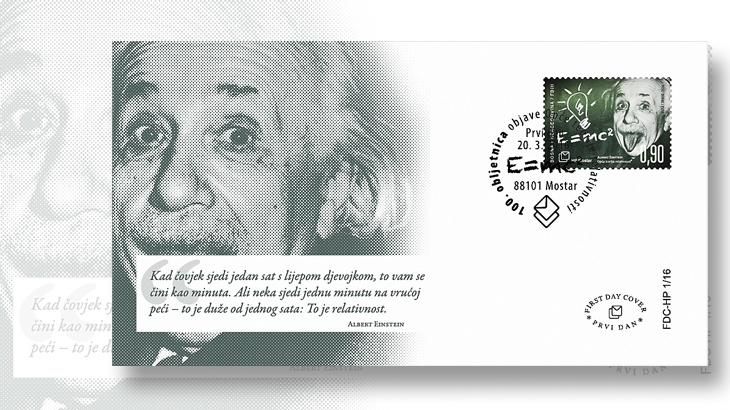 Arthur Sasse’s photograph of a Albert Einstein sticking out his tongue is shown on the stamp issued by Croatian Post Ltd. Mostar and on the first-day cover. The photo was taken after Einstein had attended a birthday celebration.
Previous
Next

In conjunction with the 100th anniversary of the publication of Albert Einstein’s general theory of relativity, the Isle of Man issued stamps July 1 honoring both Einstein and Stephen Hawking.

In announcing the stamp issue, the Isle of Man Post Office said: “Professor Hawking is arguably the most brilliant theoretical physicist since Albert Einstein and certainly the most famous scientist of modern times. These two great minds have contributed so much to our understanding of the cosmos.”

The 74-year-old Hawking endorsed the stamps, saying: “I am honoured to have both my face and life’s work featured alongside Albert Einstein and the commemoration of 100 years since the publication of his theory of general relativity.

“This limited edition collection of six stamps, created in collaboration with the Isle of Man Post Office and Glazier Design, displays some of the equations over the past century that have led to significant scientific discoveries and, in turn, have had a profound impact on the world.

“Much of my life’s work has been to encourage young people in the study of cosmology and astrophysics and to help inspire them to better understand our universe and beyond. I hope that this unique set of stamps goes some way towards achieving this.”

Portraits of Einstein and Hawking are shown on the 45-penny and 50p stamps, respectively. The former stamp includes Einstein’s equation E=mc2, and the latter includes Hawking’s entropy of black hole equation, S=¼A.

The designs of the other four stamps are related to black holes. Merriam-Webster’s Collegiate Dictionary defines a black hole as “a celestial object that has a gravitational field so strong that light cannot escape it and that is believed to be created especially in the collapse of a very massive star.”

The £2.44 high denomination of the set shows a representation of a black hole. The £1.69 stamp depicts two black holes colliding, and the 95p denomination shows gravitational waves powered by two colliding black holes.

Pictured on the £1.27 stamp is Hawking radiation, which is produced by black holes.

Cartor Security Printing of La Loupe, France, printed the stamps by offset. A special iridescent foil printing technique was used for the profile silhouette of Queen Elizabeth II and the words “Isle” and “Man” in the country’s name.

The stamps were produced in sheets of 10, in a souvenir sheet with all six designs se-tenant (side-by-side), in a prestige booklet with text and illustrations in addition to the stamps, and as self-adhesives in a pane of six.

Other postal administrations have commemorated the 100th anniversary of the publication of the theory of relativity on new stamps, including Jersey and Bosnia and Herzegovina (Croat Administration).

Melanie Gouzinis, head of philately for Jersey Post, said: “Einstein is the embodiment of genius, eccentricity and free-thinking and has had a colossal impact on science and technology of the 20th and 21st centuries. It is so exciting to think that 100 years since he published his paper, as we have seen in the news recently with the proof of the existence of gravitational waves, he continues to inspire scientists, philosophers and students around the world.”

The press release announcing the stamps describes the designs as “featuring iconic photographs of Einstein with background detail alluding to aspects of his work.”

The other contains a large stamp, almost 3 inches by 3 inches, showing a chalk drawing of Einstein in the foreground with equations and illustrations in chalk on the blackboard behind him.

Included on the left side of the selvage is the Einstein quote, “Look deep, deep into nature, and then you will understand everything better.”

The London firm Hat-Trick Design designed the stamps and souvenir sheets, and Cartor printed them. The stamps were issued in panes of 10.

The design of this 90-pfennig commemorative is based on a photograph of Einstein taken on his 72nd birthday in 1951.

As Einstein was leaving a birthday celebration at Princeton, UPI photograph Arthur Sasse asked him to smile for a picture. In response, Einstein stuck out his tongue.

Einstein liked the photograph so much that he requested nine copies of it.

The design of the stamp also includes a light bulb and Einstein’s famous equation.

Marin Musa designed the stamp; it was printed by Zrinski.