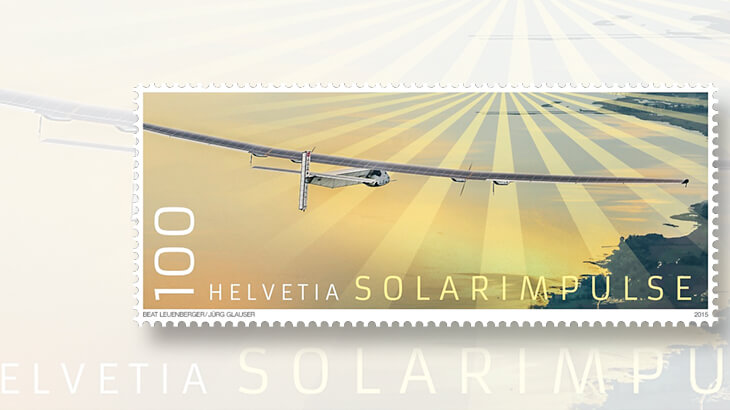 One day after the completion of the first round-the-world trip in a solar-powered aircraft, Swiss Post issued a stamp paying tribute to the pilots.

The 1-franc stamp, issued July 27, shows the aircraft, Solar Impulse 2. Powered only by the sun, it is as large as a Boeing 747, but weighing about the same as a car.

The two Swiss pilots, Bertrand Piccard and Andre Borschberg, began the journey of more than 26,000 miles on March 9, 2015, taking off from Abu Dhabi. With 16 stopovers along the way, including six in the United States, Solar Impulse 2 landed in Abu Dhabi July 26.

In announcing this stamp, Swiss Post said, “They’ve done it! Two Swiss pilots, Bertrand Piccard and Andre Borschberg, have completed an unprecedented round-the-world trip in a solar-powered aircraft — without any fuel, powered only by the sun.

“Such an adventure was only made possible by a keen pioneering spirit. This exceptional feat deserves appropriate recognition! Swiss Post is issuing a special stamp to commemorate the pilots’ achievement.”

In addition to being the first solar-powered aircraft to fly around the world, Solar Impulse 2 and its pilots broke several other records.

But, according to Piccard, that wasn’t the point.

He is quoted in an article by Susan Misicka on the Swiss news website: “ … We want to demonstrate the importance of the pioneering spirit, to encourage people to question what they’ve always taken for granted. The world needs to find new ways of improving the quality of human life. Clean technologies and renewable forms of energy are part of the solution.”

Beat Leuenberger and Jurg Glauser designed the stamp. It is sold in panes of eight. The stamp may be ordered from Swiss Post’s online shop.