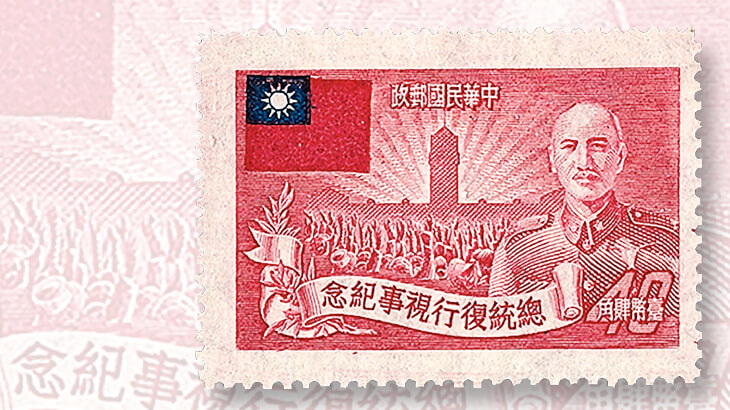 The Republic of China 1952 President Chiang Kai-shek and Followers set (Scott 1052-1056), issued both imperforate and perforated gauge 14, is in demand in unused, no gum (as issued) condition and selling for more than the 2017 Scott Standard Postage Stamp

Collectors of China and those who dabble in stamp investments know that it has been a wild ride in the Chinese stamp market. Items have gone from hot to not so quickly that stamp catalog editors must have been pulling out handfuls of hair trying to keep up with them.

Current markets for Chinese stamps are generally not as active as they have been in the recent and not-so-recent past. But as in previous years, there are still pockets of great strength, with strong demand for select issues.

Early stamp issues of the Republic of China (Taiwan), roughly 1950 to 1960, is such a pocket, with strong demand for many stamps and sets in mint never-hinged condition, or no gum condition for stamps that were issued without gum.

One good example is the set of five President Chiang Kai-shek and Followers stamps (Scott 1052-1056) issued March 1, 1952. The stamps’ design features the Nationalist Chinese flag in the upper-left corner, and flag stamps are always popular with Chinese collectors. The stamps were issued without gum and both imperforate and perforated gauge 14. The 2017 Scott Standard Postage Stamp Catalogue values the perforated set unused without gum (as issued) at $361. The imperforate set unused without gum (as issued) is valued at $495.

Both the perforated set and the imperforate set are in demand and selling for $525 each. If you find them for less than that, it is a bargain.