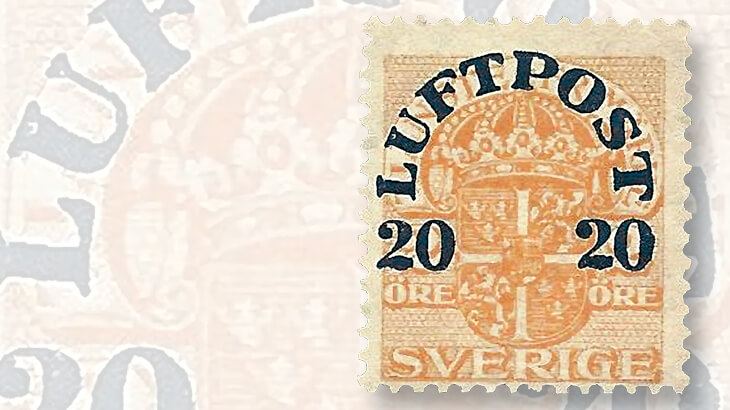 Sweden’s withdrawn Official stamps were overprinted for use as the country’s first airmail stamps in September 1920. The 20-ore stamp is the second of three denominations. 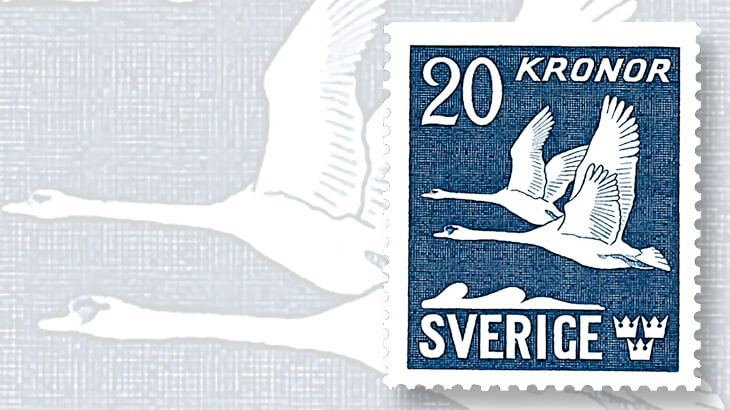 A 20-krona ultramarine stamp issued May 4, 1942, is listed as an airmail issue in the Scott catalog, but could be used as postage on any mail. Two mute swans in flight form the design. 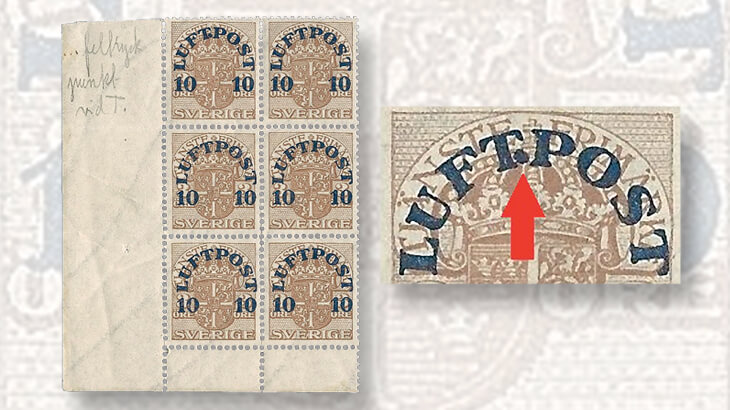 Major and minor varieties resulted from the overprinting process for the new airmail stamps. One variety has a period after the “LUFT” in “LUFTPOST,” as seen on the top left stamp in this block of Sweden Scott C1. 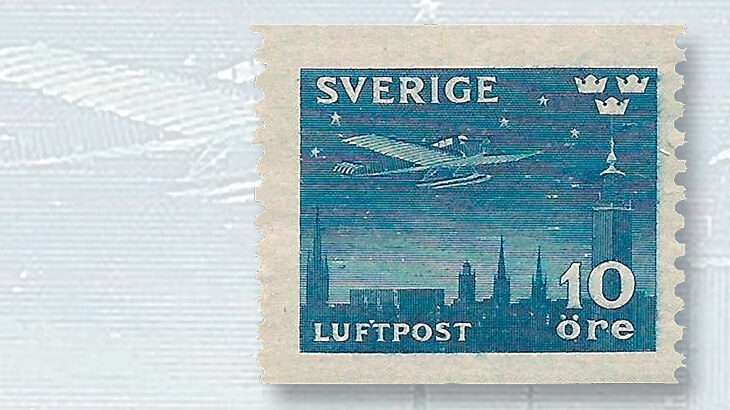 To mark the beginning of night airmail flights, two denominations using the same design were issued on May 9, 1930. The design depicts a Junkers F13 airplane over Stockholm.
Previous
Next

More than 100 years ago, the first experimental flights took place in Sweden. The early airplanes were rather primitive machines, and far from reliable.

In 1912, mail was carried by airplane for the very first time in Sweden.

Gradually the aircraft became more dependable, and the Swedish Post Office decided to offer airmail service between Malmo, in the very south of Sweden, and Berlin, via Warnemunde on Germany’s Baltic coast. It all started on Aug. 11, 1920, when a plane left Berlin for Malmo. The return flight took place the following day.

According to the agreement between Sweden and Germany, this mail flight was to be a daily service, thus considerably speeding up communications between the two countries. Most classes of mail (including regular and registered letters, postcards and printed matter) could be forwarded by air by paying a special airmail fee in addition to the regular postal rate.

The airmail fee was 10 ore for postcards, and 20o or 50o for letters and printed matter. The sender was required to clearly write the word “Luftpost” (airmail) in the upper left corner of the cover. The post office staff then added an airmail label.

When the service started in August 1920, no specific airmail stamps were available and regular postage stamps were used.

On Sept. 19, 1920, a new connection linking Malmo with Copenhagen, Hamburg, Bremen, Amsterdam and, finally, London was opened. To coincide with this important development, the Swedish Post Office issued a set of three airmail stamps on Sept. 18, 1920 (Scott C1-C3, and watermark varieties C4-C5).

The Scott Standard Postage Stamp Catalogue states that the new stamps were issued Sept. 17. They were, in fact, distributed to the post offices on Sept. 17, but went on sale the following day.

Sweden’s postal authority had large remainders of service stamps (Officials) because their usage had ceased on July 1, 1920. The 2o, 3o and 4o Official stamps of the 1910-19 series were used to produce the new airmail stamps.

The former Officials were overprinted with the word “LUFTPOST” and the new ore denominations of 10, 20 or 50. The quantities overprinted ranged from 570,000 to 604,000 for the various denominations.

As is often the case when it comes to adding overprinting to stamps, interesting errors might occur. This certainly happened in the instance of the new Swedish airmails; for example, all denominations exist with inverted overprints. The 10o exists with a double surcharge. All these major varieties are scarce, and examples also have been forged.

There are also minor overprint varieties, including a dot after “LUFT,” as illustrated here on the top-left stamp of a block of six of Scott C1, the 10o-on-3o stamp. Examples of the overprints with damaged letters also exist. It can be quite fun seeking out these varieties.

The next set of airmail stamps (Scott C6-C7) was issued May 9, 1930, marking the inauguration of the night route between Stockholm and Rotterdam in the Netherlands. The design features a Junkers F13 transport airplane flying through a starry night sky over Stockholm. The denominations are 10o and 50o. These are still very common stamps in both mint and used condition.

The Scott Standard catalog lists an additional Swedish airmail issue, a 20-krona stamp perforated on all sides (Scott C8c) that was released May 4, 1942. In mint, never-hinged condition this stamp is fairly valuable, with a Scott catalog value of $140.

Laila Prytz-Wik, the wife of a Swedish postal official, was the artist for the stamp design, which features two flying mute swans. The stamp proved to be quite popular, and there were additional printings. Scott C8 was issued on July 7, 1953, perforated on three sides, and also in 1953 in handmade booklets of 20 stamps (C8a). A complete booklet in very fine condition is something of a rarity, with a Scott catalog value of $725.

In 1942, 20kr was quite a lot of money (nearly U.S. $5), and the new stamp was used primarily to pay the fee for larger parcels sent by air. Unlike its predecessors, the Scott C8 design does not include any reference indicating that it is an airmail stamp. In fact, the stamp could be used for all classes of mail and is no more a specific airmail stamp than are all other Swedish regular postage stamps, which can be freely used for both surface and airmail letters and parcels.