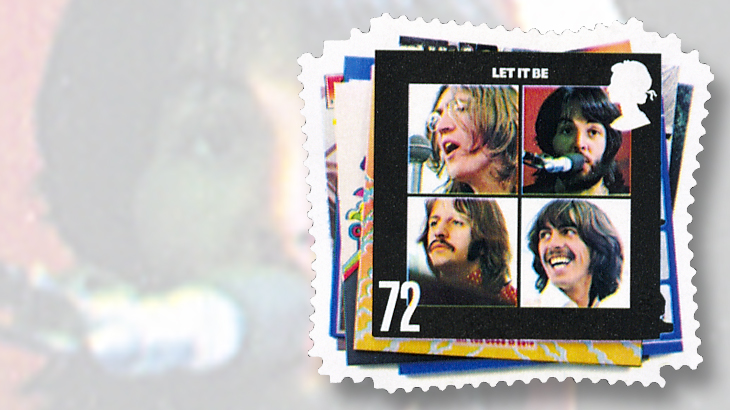 The 72-penny Let It Be stamp from Great Britain's 2007 Beatles issue. Paul McCartney is shown in the upper right photograph on the album cover.

Paul McCartney, one of the world’s most famous musicians, turns 74 today. He was born James Paul McCartney in Liverpool, England, on June 18, 1942. His father was a musician, and McCartney took up guitar in his teens.

In 1957, he joined a band called the Quarrymen, which had been formed the previous year by another guitarist, John Lennon. In 1958, the group added George Harrison to play lead guitar, and following the departure of other members, the group reorganized as the Beatles, with Stuart Sutcliffe on bass and Pete Best on drums. When Sutcliffe left the band in 1961, McCartney took up the bass, and the following year Ringo Starr was hired as the group’s new drummer.

McCartney and Lennon co-wrote most of the Beatles’ songs, though some written primarily by one or the other were still credited to both men. The group’s worldwide popularity exceeded anything ever seen before in popular music, and McCartney sang lead on many of their biggest hits, including I Saw Her Standing There, Michelle, Hey Jude and Let it Be.

After the Beatles’ breakup in 1970, McCartney issued his first solo album, McCartney, followed in 1971 by Ram (recorded with his wife Linda), and Wild Life (recorded as the band Wings).

McCartney has released some two dozen studio albums, including the most recent, New, in 2013. A career-spanning compilation, Pure McCartney, was released June 10.

McCartney was knighted by Queen Elizabeth II in 1997. He was inducted into the Rock and Roll Hall of Fame in 1988 as a member of the Beatles, and again in 1999 as a solo artist.

McCartney has appeared on a number of stamps from different countries as a member of the Beatles, and in 2002 he contributed six fanciful flower designs for a set of stamps issued by Isle of Man (Scott 960-965).

A 10-stamp Beatles set issued by Great Britain’s Royal Mail in 2007 includes several stamps that picture McCartney with the other members of the group on reproductions of Beatles album covers (Scott 2420-2426).