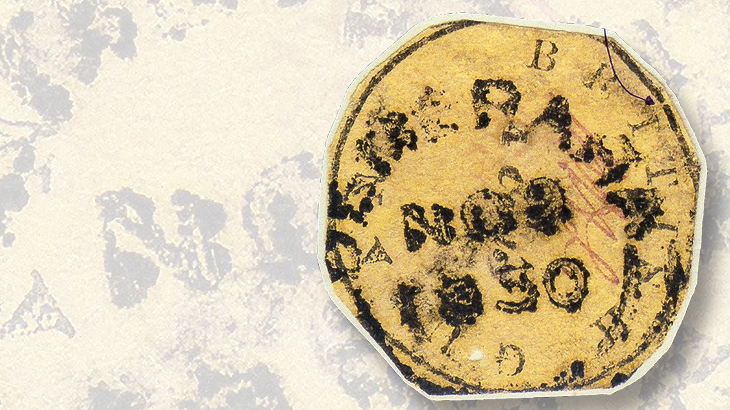 This 4¢ black on orange stamp features the type B rim with the frame break above the “T” of BRITISH. 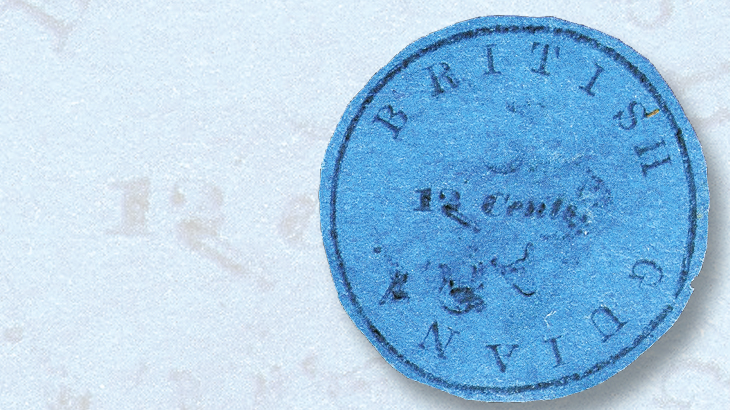 Rim type D, with frame break above to the right of “G,” is featured on the 12¢ black on blue. 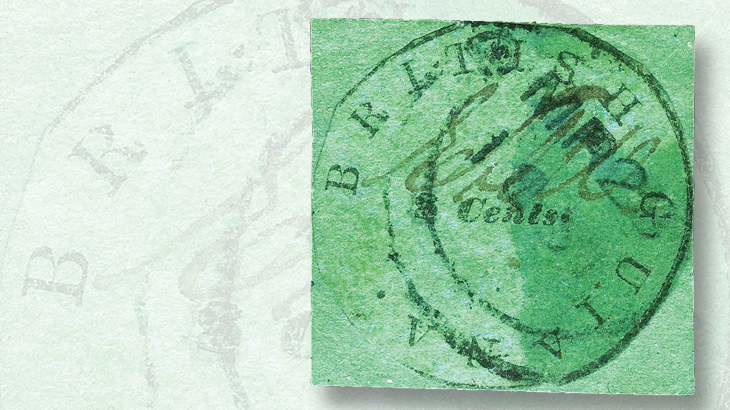 The 8¢ black on green shows rim type C, with the first “I” of BRITISH leaning to the right. 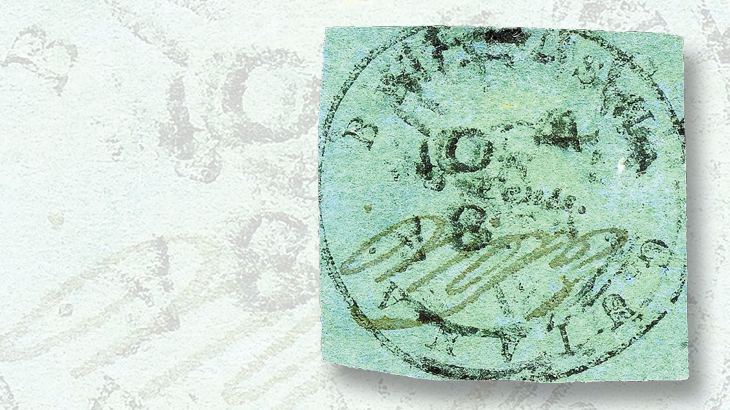 The type A rim, with frame break between the “G” and “U,” is shown on the 8¢ black on green.
Previous
Next

During his third trip, in 1498, Christopher Columbus noted the shoreline of the Guianas and related his observations. It is doubtful that he went ashore, because in his words, the shoreline was a forbidding swamp. Nothing much happened for a century. Then, in 1580 an expedition of Dutch explorers arrived, and founded the settlements of Essequibo and Demerara.

Soon after, Sir Walter Raleigh was released from the Tower in order to lead an expedition. The adventure was motivated because one key word was spoken: gold. Someone, who had ventured into the interior, said there was gold there. It was rumored the natives of the area, named the Surinen, painted their bodies with gold powder.

In fact, the presumption of freely available gold was so great that, for a time, every interested party in Europe thought El Dorado would be found at the head of one of the three great rivers that cross this wondrous land from south to north: Essequibo, Demerara, and Berbice. Raleigh’s expedition led to nothing other than disaster: the demise of his fleet, death of his son, and his own death sentence upon his return to England.

The Dutch were able to defend their gains against the aggressors, and quickly formed a colonial outpost after their victory. French and other Dutch settlers arrived during the 17th century and founded settlements in the eastern regions, now being French Guiana and Suriname.

In 1796, an expedition from Britain headed by Major-General Whyte defeated the settlers and took power over the previously Dutch towns. But that did not last long. By the Treaty of Amiens, in 1802 the entire area was restituted to the Dutch. However, scarcely had a year passed when the British mounted another expedition and again routed the Dutch settlers.

The demise of Bonaparte in 1812 upended all relations between European powers. The Dutch Crown had bet on the wrong horse. Consequently, in the peace that followed, the Netherlands lost all rights to the western section of Guiana, and never again attempted to regain any part of it. The British at first founded two colonies, Demerara and Essequibo; and a third, Berbice, followed soon. In 1831, the Crown Colony of British Guiana was founded. It was comprised of the three former colonies, now united under one authority. The bill was given royal assent, and a governor promptly embarked for the remote new colony. His name was John Scott.

The economy of the colony progressed steadily. El Dorado was never found, but the gold business developed and is still today an important contributor to the product of the country. In the early colonial days, the most successful plantations were of coffee and cotton. Farms grew, settlements multiplied and expanded. Slaves labored and, after 1807, began their emancipation. They then settled in the colony. Many went to towns and established useful cooperatives.

Later, for the landlords, the crop of choice became sugar cane. Plantation labor was brought from East India in several waves. Some workers stayed five years and then returned home. Others, probably the majority, remained and established roots in the colony.

For some time, the sugar business grew and was the main product of the colony. But monoculture brought hardship to the colony when the world glut of sugar depressed prices and rendered the industry unprofitable. Since 1850 and up to the time of independence, the fortunes of the colony have been largely determined by the international price of sugar.

Communications in British Guiana, between the three parts of the colony, or for that matter between any two distant points, were difficult from the beginning and continued to present obstacles for a long time thereafter. Demographic and economic growth could take place along the shores of the great rivers but hardly at all in the space between the rivers.

With the growth of plantations, gradually the population expanded inland, and transportation between emerging villages and towns was in large part riverine. Near the mouths of the major rivers emerged two notable cities.

The capital city is Georgetown, earlier Demerara, on the eastern side of the mouth of the Demerara River. Berbice, now renamed New Amsterdam, was founded on the eastern bank of the river of the same name. Even later, when railways began to be built, the rivers were considered to be unbridgeable, and mailbags were ferried for long distances between fragmented railway lines.

Postal matters were complicated. The British Post Office administered post offices in colonies, appointed postmasters, made decisions for them, collected the revenues and paid expenses, including salaries, commissions and honoraria. In the case of British Guiana, the British Post Office appointed packet agents for Demerara, Essequibo and Berbice. At first there was only one office, located in the capital. Later a sub-postmaster was appointed for Berbice.

Needless to say, the day-to-day decisions and organizational matters of the post office had to be handled locally. The authority arrangements between the British Post Office in London and the postmasters in the colony are not clear. The governor also had a say in administrative, contractual and other legal matters, and justices would help when needed.

Fortunately for the development of the British Guiana postal system there was an energetic individual in the colony named Edward Thomas Evans Dalton, who, being appointed postmaster of Demerara, was in effect the chief of all matters postal in the colony.

Dalton appears in the minutes of government mostly for his lack of timeliness in making payments to the Exchequer in London, for being in arrears repeatedly, sometimes for large sums, and also for his capacity to make good when pressed. He was generally liked and was held in high regard by the governor, by the governor general, and certainly by the business community in Demerara. He was a daring man.

In January 1846, Dalton initiated a service of mail between Georgetown and Essequibo. Given the isolation factor, it was a necessary development. When the General Post Office in London found out about the new scheme, they declared it to be entirely illegal and ordered that it be terminated at once. This is an example of the friction the system engendered: the London organization requiring revenue and prompt payment, and the colonial office trying to deliver necessary services to the population. Sometimes it turned out the two bodies were working against each other.

Fortunately, all this came to a close. There had been motions proposed for the discontinuation of the GPO’s authority over colonial post offices in the Caribbean area, and for the transfer of authority and responsibility to the colonial governments. Dalton was again involved.

In January 1850, the British Guiana colonial administration petitioned the GPO for permission to operate a local postal system, in accordance with their own understanding of the community’s requirements. Following local traditions and Dalton’s temperament, the system was put in full effect three months before it was authorized.

Dalton assured his place in history by the outstanding role he played in the creation of the first postage stamps of a British possession in the Americas — after Brazil and the United States, and before the colonies of British North America.

His proposals were a true postal reform. New postage rates were put forth: 4¢ for single-weight letters to nearby towns, 8¢ for further destinations, and 12¢ for letters to towns beyond one of the major rivers. Prepayment of postage was made compulsory. Newspapers would be delivered without charge.

The Combined Court voted to appropriate $2,400 to fund the experiment. The governor agreed to such provisions as had been proposed. On July 1, 1850, this system, quite elaborate, which coordinated the timing of pedestrian, horseback, rail and water routes, went into full effect. Postage stamps of denominations 4¢, 8¢ and 12¢ were created for the purpose of postage prepayment, and they were printed at the Royal Gazette, Georgetown.

Their method of production was ingenious, if somewhat primitive. In addition to Georgetown, there were 20 active post offices in the colony and each received a shipment of the issued stamps. Because they have much similarity to the round labels that typically are at the ends of thread spools, these stamps became widely known as “Cottonreels.”

On March 1, 1851, the always dynamic Dalton inaugurated a complementary service. He determined that merchants in Georgetown would be ready to pay 2¢ if daily newspapers could be delivered to their respective offices and stores on the main streets of the city. For this project, a further issue of stamps denominated 2¢ was made at the Gazette. The presumed demand for the 2¢ service did not materialize, and that aspect of the scheme was abandoned soon thereafter.

Four different devices were made to print the stamps; apparently the denominations were changed as needed, while the four round frames were in continuous use for all denominations. This method of production led to the interesting fact that four different stamps can be found for each denomination. In the pictures in this article we can see the four types of Cottonreels:

4¢ black on orange, rim type B (with frame break above the “T” of BRITISH)

8¢ black on green, rim type C (with first “I” of BRITISH leaning to the right)

All Cottonreels are rare stamps. But among them the 2¢ stamps are great world-class rarities. Only 10 examples are recorded, and of them four are in two pairs. This gives us a hint about the failure of the program introduced to deliver newspapers in Georgetown. In fact, the two pairs have come to us used on parts of envelopes, paying the less rare 4¢ rate. We have no known example of a 2¢ stamp, which was printed on rose-colored paper, paying the correct 2¢ newspaper delivery postage.

Perhaps one will be found in the future. That would make a great addition to the philately of British Guiana and a tangible tribute to the endeavors and creativity of Edward Thomas Evans Dalton.