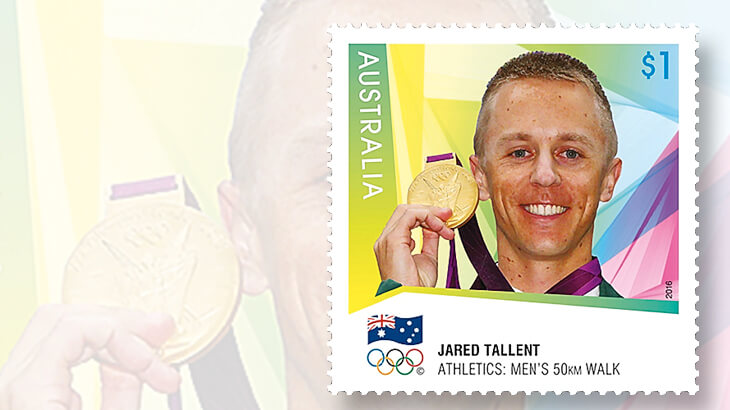 Due to the disqualification of Russian race walker Sergey Kirdyapkin, Jared Tallent of Australia was presented a gold medal June 16 for the 50-kilometer event at the 2012 London Games. Australia issued a stamp the next day, June 17.

These instant stamps are printed and made available the day after the Olympic win.

Australia Post explained the delay, “History was rewritten when earlier this year it was announced that the three-time Olympic medallist from Ballarat would be awarded gold for his 50km walk in the London 2012 Olympic Games following the disqualification of Russian, Sergey Kirdyapkin.”

The $1 stamp shows Tallent holding his gold medal, which he received June 16 during a ceremony in Melbourne. The stamp was produced in a pane of 10, as were Australia’s other instant Gold Medalists stamps for the 2012 London Games (Scott 3745-3751).

Tallent said, “I can now celebrate a moment that every athlete dreams of and I look forward to sharing the experience with my family, including wife Claire, my Mum, Dad and siblings.”

Australia Post will continue its instant-stamp tradition at the Rio 2016 Olympics Aug. 5-21 in Rio de Janeiro, Brazil. Each Australian gold medal performance will be commemorated on a stamp issued in a pane of 10.

We have more Olympics-related posts: