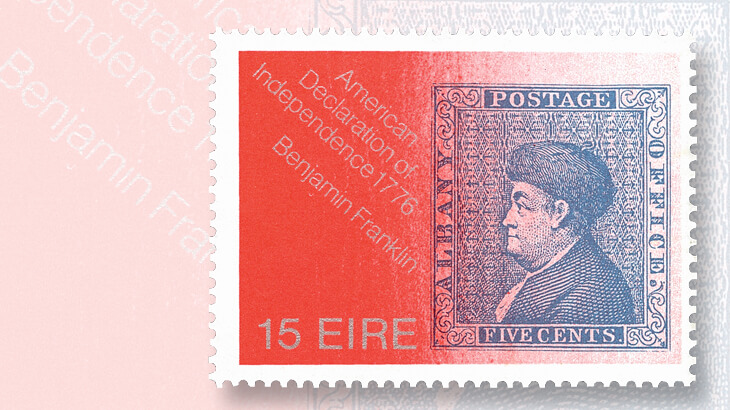 The 5¢ Albany, N.Y., postmaster’s provisional essay is shown on this 15-penny stamp issued by Ireland May 17, 1976, to commemorate the American bicentennial.

Among my favorite stamps in my collection of Ireland is the set of four stamps (Scott 389-392) issued May 17, 1976, to commemorate the bicentennial of the United States.

In the United States, the bicentennial celebrations culminated on July 4, 1976, the 200th anniversary of the adoption of the Declaration of Independence.

Ireland was only one of many countries to pay tribute to the bicentennial by issuing stamps.

Given the close relations between Ireland and the United States because of ancestral ties and heritage, it came as no surprise that Ireland’s Department of Posts and Telegraphs (which became An Post and Telecom Eireann in 1984) would issue stamps to honor one of the most significant events in the birth of our nation.

My personal favorites are the 9p and 15p stamps, both of which feature the 5¢ Albany, N.Y., postmaster’s provisional essay, or unaccepted stamp design (Scott 1Xa-E1).

Franklin was the first postmaster general under the Second Continental Congress and was appointed by the congress to the committee charged with drafting the Declaration of Independence.

The 7p and 8p stamps bear the inscription “American Declaration of Independent 1776” in silver at the bottom of the design. The 9p and 15p feature the same inscription placed on the left side of the design with the added name “Benjamin Franklin.”

The stamps also were issued in a souvenir sheet of four.

Unfortunately, I do not have in my collection the color-omitted errors associated with this set. Stamps from the panes of 100 and from the souvenir sheet, which were printed in sheets of nine, exist with the silver omitted. The error stamps are rather pricey, valued in the Scott Standard Postage Stamp Catalogue at $950 for the 15p and $2,000 each for the 7p, 8p, and 9p stamps.

This year marks the 240th anniversary of the Declaration of Independence. This historic event announcing the independence of the 13 American colonies has been the subject of paintings, a Broadway musical, books and postage stamps.

In the July 4 issue, Linn’s managing editor Charles Snee takes a look at U.S. stamps that honor the Declaration of Independence.

We wish our readers a happy and safe Fourth of July. If you would like to read the Declaration of Independence, you will find it here.