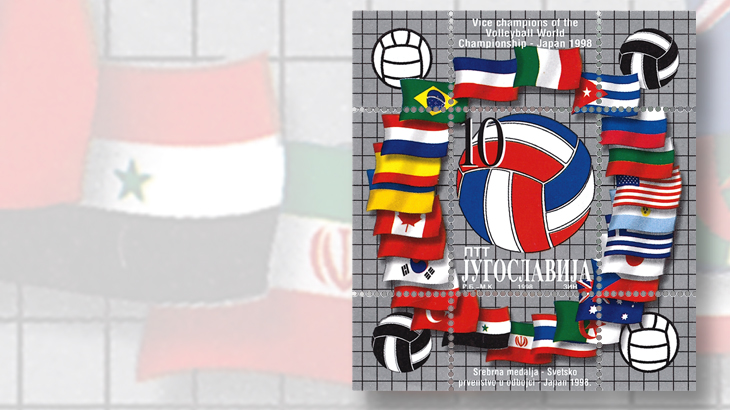 In the world of stamp collecting, dead countries are erstwhile postal entities that for a variety of reasons no longer issue postage stamps. A fairly recent dead country is Yugoslavia. Hammered together in 1918 from several countries with different languages, religions, and cultures, it broke up in the 1990s into its constituent parts in the Third Balkan War. The last sadly ironic Yugoslav stamp issue (Scott 2584) commemorated abandoned dogs and was issued Jan. 31, 2003.

Yugoslavia issued a number of attractive stamps and sets that are in demand from topical collectors. Many of the earlier topical stamp sets were not greatly affected by the country’s demise and often sell for close to their 2016 Scott Standard Postage Stamp Catalogue value. However, many of the sets issued in the 1990s are presently overvalued.

A good example is the 10-dinar Yugoslavia Silver Medalist at 1998 World Volleyball Championships souvenir sheet (Scott 2430). The Scott Standard catalog values this souvenir sheet at $50 in mint never-hinged condition, with the value in italics.

For those who enjoy beer, there’s the 1871 50¢ Sherman beer revenue: Stamp Market Tips