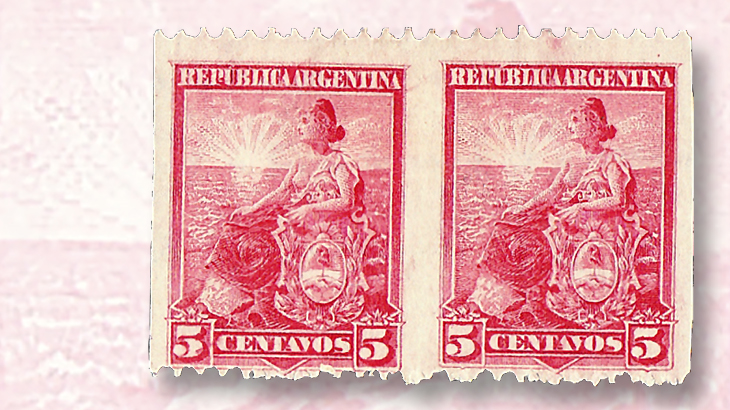 Another imperforate variety of Argentina’s Seated Liberty issue; this pair of the 5c stamp is an example that is vertically imperforate. 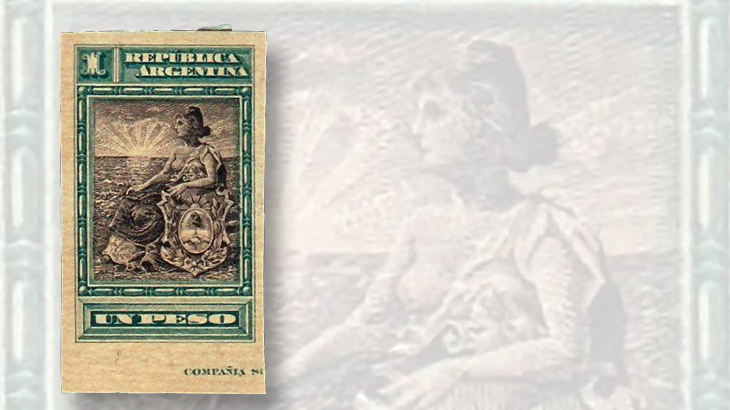 A trial color proof of Argentina’s large-format 1-peso Seated Liberty issue. Note the partial imprint of the printer’s name in the margin. 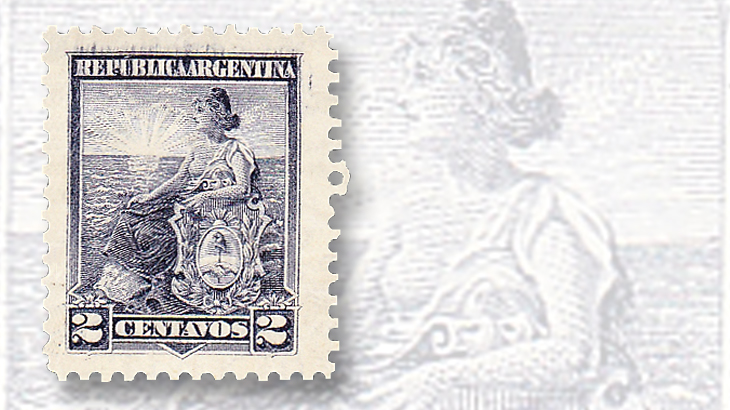 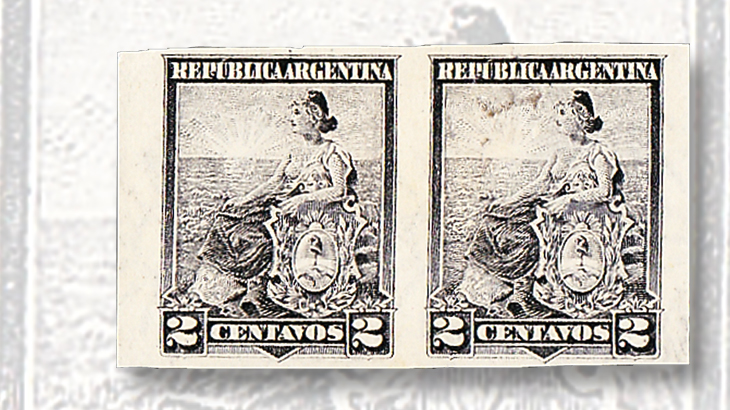 Imperforate Seated Liberty pairs, such as this 2-centavo pair, are not uncommon. 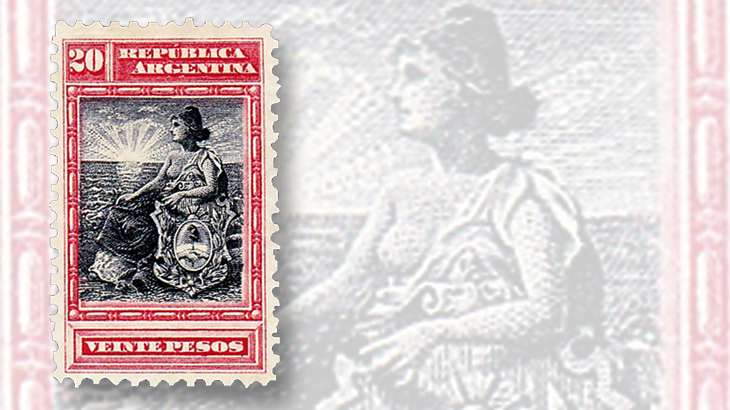 The four high denominations of the Seated Liberty stamps were bicolor; the lower denominations were single color. The 20-peso stamp is the highest denomination of the series.
Previous
Next

First, and most important, the stamps are attractive, depicting an allegorical female figure of Liberty sitting with her left arm resting on a shield that displays the coat of arms of Argentina, with the sun rising over the ocean behind her.

Second, there is considerable variety among the stamps, presenting challenges for collectors who like completion.

Third, there is preproduction material, such as proofs and samples, that adds to the interest and scope of a collection.

Fourth, covers that demonstrate stamp usage are attractive and not difficult to find.

And last, and possibly best of all: None of the basic material costs an arm and a leg.

The high denominations, 1p to 20p, are bicolor stamps with the same Liberty design but in a larger format.

The stamps were printed by the South American Banknote Co. (La Compania Sud-Americana de Billetes de Banco) of Buenos Aires. The company did fine work, as well as producing perforation varieties and an assortment of preproduction material, all to the continuing joy of philatelists.

Fair quantities of samples (“muestras” in Spanish) and proofs of various colors and kinds of paper also are available. I like to add them to my collection.

I mentioned perforation varieties, and there are more than a few.

The Scott Standard catalog encompasses them all with a list of gauge 11½, gauge 12 and compound. The specialized Catalogo Kneitschel de Sellos Argentinos and other specialized catalogs also indicate that all denominations are known perforated gauge 11½, all through the 1p denomination were perforated 12¼ (where Scott measures them at gauge 12), and all through the 50c denomination were issued with compound (11½ by 12¼, or 12¼ by 11½) perforations.

Most varieties are neither exceptionally difficult to find nor expensive, though it might take a little looking. They can be found in the usual places; for example, in American Philatelic Society sales books, at shows, and from online dealers and online auction websites.

Do pay attention to centering. Many of these stamps are poorly centered, and it took me some time to accumulate a set with really nice centering.

Also, watch for tropical staining. Tropical stains result from a fungus caused by high humidity, which can migrate and damage your other stamps. Remedies are available, but be careful.